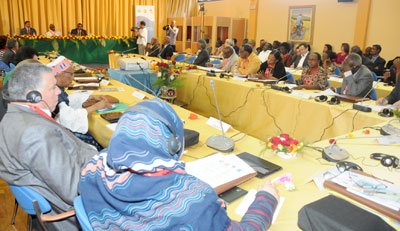 The National Confederation of Eritrean Workers (NCEW) in partnership with the International Trade Union Confederation (ITUC) hosted an international conference in Asmara on March 24 and 25, 2016, under the theme, “The Decent Work Agenda in Eritrea”.

Before the conference started during the morning hours of March 24, the organizing committee was taking care of last minute arrangements, while all participants were ushered to their seats at the NCEW’s premises. Guests were taking the opportunity to greet each other; old friends meeting up again and new participants took the chance to introduce themselves. Participants from trade union movements in Africa as well as Asia and Europe were among the guests.

To make the opening of the event colorful, artist Barnabas Mebrahtu and his pianist, Noel Araya, played a song of solidarity, during which the public was standing up and holding each other’s hand, while fervently singing the song of Solidarity to open the symposium.

The conference, then, featured a video documentary on Eritrea’s history, particularly, the role of the NCEW. This short video gave a glimpse on the role of the workers union both within the country as well as in the diaspora. The strong organization demonstrated good relations with the ITUC since the 1980s as they were extending moral and political support to the liberation struggle. The NCEW became official with the wake of Eritrea’s independence and continues, until today, to play a key role in the protection of worker’s rights in the country. Being member of several international organizations, such as the International Labor Organization (ILO) as well as the ITUC, NCEW, as an independent entity, took the opportunity to show Eritrea’s reality to members of trade unions present at this event.

Mr. Tekeste Baire, General Secretary of the NCEW, gave a welcome speech and highlighted the importance of having this forum to keep the momentum of the previous ITUC-Africa conference held in Dakar, Senegal and in forging unity among trade unions. Mr. Kwasi Amankwah, ITUC-Africa’s General Secretary and Mr. Wellington Chibebe, ITUC’s Deputy General Secretary as well as Arezki Mezhoud, Secretary General of the Organization of African Trade Union Unity (OATUU) also gave their solidarity speeches.

Mr. Osman Saleh, Eritrea’s Minister of Foreign Affairs, addressed the audience and officially launched the conference. In his speech, Mr. Osman highlighted the importance of trade unions as representatives of the people and he, thus, reiterated the role of each stakeholder and especially the vital role participants carried on expressing the Eritrean reality upon their return to their respective country.

The two-day long symposium under the theme of solidarity for decent work featured five main subjects of discussion: migrant labor, the question of regional integration and unity of trade unions, employment creation and skill building of workers as well as a tripartite dialogue on forced labor.

The main purpose of the solidarity forum was to bring together national, regional and international trade union organizations as well as prominent trade unionists to discuss, raise common understanding and reinforce their unity and enhance their resolve in the fight against violation of workers’ rights. In fact, one aspect, which was heavily highlighted during the conference, is the worsening of working conditions worldwide. In regards to workers, the era of globalization has not benefited workers around the world. As a representative of trade union from the United Kingdom (UK) highlighted, the role of trade unions seem to diminish at global scale and it is becoming difficult to monitor and evaluate working conditions due to the number of outsourcing and home-based job leaving office spaces empty.

Participants also debated on the question of unity and the vision of pan-Africanism, which is challenged through the numerous intertwined regional organizations as Professor Vladimir Antwi- Danso highlighted during his presentation on regional integration and unity of trade unions in Africa. He further explained that economic integration within the continent is facing numerous obstacles such as the overlapping of memberships, which goes in the opposite direction of the vision of African unity.
Furthermore, Professor Vladimir clearly explained through the metaphor of the spaghetti bowl of African regional trade agreements and showed the participants its negative impacts on investments and growth.

During the session, Mr. Kwasi Amankwah also gave a clear presentation on African trade union movements, its challenges and way forward. He elaborated on the urge for trade unionists to enhance south-south trading relations and in overcoming external economic programs imposed such as the famously known Structural Adjustment Programs (SAPs).

The question of African unity was the main political vision of African governments at independence and regional integration is an important instrument towards such attainment. However, as participants discussed the multiple external actors involved, the lack of political will as well as ongoing challenges the continent is facing, are delaying the idea of an intra- Africa trade system. Accordingly, the role of trade unions as civil society has to be strengthened in terms of economic development and more importantly in the promotion of decent work.

The lively debate continued with the themes of migrant labor presented by Mr. Wellington Chibebe. The question of migrant labor was entangled with the issue of protecting migrant labor rights. The focus of discussion was particularly targeted towards those working in Middle-Eastern countries and especially women migrant employees working as domestic are facing greater risk of abuses.

Hence, the politically unstable region of the Horn of Africa, the situation of ‘no war no peace’, the UN imposed sanctions, the campaign of misinformation and disinformation, the limitation of political and fiscal space as well as the inadequacy of statistical capacity are all factors impacting the national development strategy.

These negative factors and,particularly, the campaign of misinformation and disinformation in regards to Eritrea’s development program, were further explained during the Tripartite Dialogue on Forced Labor, by Mr. Woldeyesus Elisa, Director General of the Department of Labor at the Ministry of Labor and Human Welfare.

Mr. Woldeyesus explained the Eritrean context in terms of labor rights and the enshrined vision for social justice. Thus, soon after independence, Eritrea became member of the ILO and ratified seven core conventions including the forced labor conventions in 2000. Subsequently, Eritrea revised its labor principles and issued the new proclamation No 188/2001 which complies with the ILO Conventions principles and recommendations. Mr. Woldeyesus addressed the crowd by explaining that: “Eritrea does not authorize forced labor by ideology, by law and in practice”. However, the challenge of misinformation or disinformation that Professor Abraham explained earlier was highlighted in regards to forced labor.

In fact, Eritrea is facing accusation of such act for implementing the compulsory and definite national service and the introduction of the Warsai Yikealo Development Campaign program in 2002. The multiple accusations of forced labor in Eritrea and especially in the Bisha Mine continue to undermine Eritrea’s development program. Despite the explanation by the Government that compulsory national service is defined as an exception for the term forced labor under article 3 (17) of the Eritrean labor proclamation No.118 of 2001 but as “Normal Civic Obligations” provided in the Convention 29. Mr. Woldeyesus stressed that it is important to understand the root cause of these accusations of forced labor. Hence, the illegal occupation of Eritrean sovereign territory cannot be seen as an excuse but a reality.

Nonetheless, despite the external threats, the government demobilized a large segment of society under the proclamation 113/2001. Mr. Woldeyesus concluded by calling participants and those holding the voice of workers to speak clearly and unequivocally over the illegal occupation of Eritrea’s territory and to subsequently help Eritrea in the advance of its labor policies and decent work programs.

Following Mr. Woldeyesus presentation, most participants raised their hands eager to share their observations. Hence, as one delegate from South Africa stressed: we have been able to go around on our own and we also visited different industries and we haven’t witness any sign of forced labor or slavery in Eritrea”. Mr. Joel Odigie, coordinator for human and trade union rights, also stressed “the need to understand Eritrea’s context and the ongoing challenge it faces and it is our role as trade unionists to go and share the Eritrean reality”.

The outcome of the solidarity forum clearly showed its success and the international conference passed its resolution towards the promotion of decent work in Africa. Mr. Kahsai Ghebrehiwet, Minister of Labor and Human Welfare, gave his closing remarks and pointed “the solidarity of workers lies upon the effective practice of freedom of association in which the Government of Eritrea fully respects the rights of employers and workers to freely associate”. He also called upon participants to share their experience and tell the world the Eritrean truth.

The conference was not only confined within the premises of the NCEW and the conference hall; the guests were embarked to several visits in the country. Besides, delegates went on a visit to the well-known Bisha Mining Share Company (BMSC) site in the Gash Barka region as well as Za.Er Textile Company based in Asmara. These visits allowed trade unionists to witness the economic development as well as the working conditions in Eritrea.

The successful international conference came to an end with a farewell dinner marking the well-known Eritrean hospitality and guests took over the dance floor under the musical beats of the folklore Sibrit Cultural Troupe.