“To throw a stone in a Green not in Grey….” Minister Arefaine 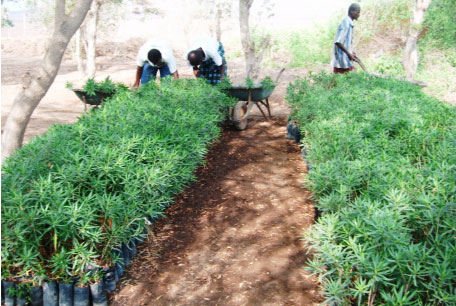 The fundamental elements human beings need to survive are obvious and people are required to exert consistent efforts to make them available. Survival is the main agenda as long as people are breathing and to maintain the eco-system in a way that meets those basic needs for the wellbeing of humans is of paramount importance. In such case scenario, it feels right to see it in multidimensional points, so as to make it clear it is one of the toughest and mutually attained human quest. Even at a family level, only the father is not the bread winner, the mother also has equal input in the family’s very survival. Putting this very basic principle in the forefront of its development schemes, the government of Eritrea is working hand in hand with its people in every aspect of development endeavors.

The world far from what it has been is changing drastically every single day. Above all, changes in our environment, the climate changes we are experiencing these days comprise majority of the alteration and easy to say affect the daily lives we are living. Because of that chief concern, we have seen leaders of the big powers in the world held a reduction of climate change summit in Paris in the last two months of 2015. Globalization at large has brought its own good and equivalently challenging effects on our lives. The emergence of technology might have solved many problems that weren’t solved in years, while cities are becoming vulnerable to the drawbacks of industrialization. Carbon emissions from factories and industries are main topics hugely addressed regarding the health of people and the destruction they are imposing to the environment. The government of Eritrea has therefore chosen the right time to react on such prevailing global and environmental catastrophes.

Eritrea as a sovereign nation, ever since the wake of independence, has been working for the national and regional developments. The government of Eritrea pursues self-reliance policy as a priority to safeguard food security, but this could not be attained without soil and water conservation. Accordingly, efforts have been unremittingly exerted towards afforestation and is still being worked upon. Many means are created to introduce the afforestation project throughout the country, one very common and a program which was inhibited by the society and easy to say taken as a culture is the summer campaign for afforestation and related tasks as regards to soil and water conservation. The Eritrean national development strategy has its own wide structure aiming on different sectors. Indeed, the significance of land is beyond measure since everything lies on it and gets out of it. There would seem no hesitation when it comes to the preservation of land because as Mr. Arefaine Berhe, Eritrea’s Minister of Agriculture puts it, “What we intend to cultivate should be fertile and what we don’t should be Green”. It’s the ultimate motto of the ministry.

A lot of green fingers, from individuals to school to governmental and non-governmental institutions including religious parties have evolved since the official announcement of afforestation day in Eritrea. May15 every year has almost for the past ten years been the day that marks a greening campaign in every corner of the country. From the first call in 2006, where only 1 green club was involved when the program was launched, while at present has reached up to 250 green clubs throughout the nation spreading in the 6 regions doing their programmed activities. Since then, people of different regions and villages in Eritrea are determinedly engaged in not only planting and nurturing trees, but also in benefiting from the trees around their homes. A village called Amexi, 14 kilometers to the northern west of Asmara, is a typical model. This village has won a reputation more than any other village like it by the association. It has trees stretching 50 hectare around it in the Tokor River. Afforestation and enclosure being the foundation for trees, people of the area possess a long experience to use such techniques to take care of it and get benefit out of it. A recent achievement of the village shows that when they wanted to extend electricity power lines to their homes, their own trees saved them from expending around 400 thousand Nakfa for purchasing poles. Not only that, the villagers have also sold some of the trees to renovate a road that would cost around 2million Nakfa. This and other uses made the people call their tress as their “capital”. A regular checking is made for the preservation of the trees and everybody in the village abides by the regulations drafted by the committee of the village and anyone fails to respect is penalized in accordance. For instance, a 10 hectare cutting of trees for any purpose would require them to plant an addition of 5 hectare extra to the taken ones, as of the agreement with the Ministry of Agriculture. All of this shows that the determination and devotion towards the afforestation campaign in the village and across the region is well advancing.

If we try to figure out the progress in the nation as a whole, it’s likely to be on the same track. Soon after the greening campaign established in 2006, many national development programs across all the regions of the nation has been achieved and progressing positively as per the government and society working in harmony. Considering the figures of the domestic annually held green campaign of the Ministry of Agriculture, it looks pretty clear that the project is well taken. It is being well executed in all the six regions of the nation with the various activities of green clubs and other institutions. According to the last report of the Ministry of Agriculture, the Central region held around 2,000,000 seedlings to be planted in 2014. Majority of these seedlings underwent nursery in the nine centers located within several sub zones of the region where nationally and communally owned.  These centers has the capacity to prepare more quantity of seedlings every year.

Statistical presentation of the ministry confirms that not less than 1,224,727 trees of different types are planted in the central region out of which, 91% are found to be well grown.

Around 16,770 hectare of land in the main villages of the region is made to be enclosed for afforestation and other agricultural purposes. Despite the size of the region, more trees are grown comparing with the other regions, as a result of an ample summer rainfall holds to be increasing from the previous two years. With the celebration of the 25th Jubilee of the Eritrean Independence Day, the greening campaign is on its way to celebrate its 10th year of journey under the theme, “Vigorous Exertion to Greening Campaign”, in May 15, there it will present the last 10 years’ achievements made and plans for the future of the operation.

Another side with a fine score is the Southern region where about 1,535,873 trees of different kind are so far planted as reported in the statistics of 2014, 85% of the whole seedlings planted found to be successful trees and covered an additional land of 412 hectares. The 10 seedling centers found in the region were practically able to prepare up to 1,622,833 seedlings in 2014. Many fine results of the other regions can be mentioned one by one, rather the major ones can be satisfying enough to see the project is a deservedly well executed to initiate in the first place.  The green campaign since its start is having good record in all regions that it manages its tasks.

Nevertheless, it would be only a fairy tale not to indicate the drawbacks it faces in some areas. Depending on the topography, climate and distance of the regions, it’s inevitable for the project to experience some difficulties like man made and naturally raised ones. Nevertheless the committees of village with the support of the Ministry in charge could possibly alleviate the problems raised on time with the enforcement of the general regulations set before.

The vision of the greening campaign is significant, besides role models, including individuals such as the Eritrean international athletes and cyclists are becoming part of the campaign to inspire the society as the minister remarked on one occasion. Coach of the national cycling team, Mr. Yonas Zekarias also made his statement on the occasion and said that the nation has come a long way from brunt of war to independence, and now they put every bit of their labor to change it and promised the cyclists would do their utmost to see more of the campaign. Mr. Arefaine on his final words also added that the awareness towards society regarding afforestation is a daily growing phenomenon that would surely enable countries like ours to be covered in green until every thrown stone drops on the green not on the grey.