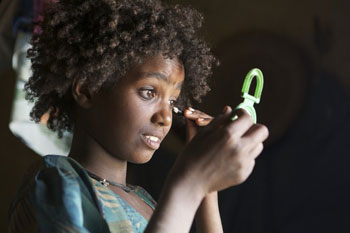 When a friend of mine who was not good-looking by any stretch of the imagination was verbally attacked by another friend as repulsive, the former simply said that God can never make mistakes in His creation. I like his wise reply, but deep inside, my friend knew that he could never make it with the fair sex. God creates and culture determines what is good or bad.

If there were no women in this world, men wouldn’t have cared much about their looks. The same also applies to women. But humans are vain with or without consorts.

What won’t people do to attract the opposite sex and lead them to their love nest.  In this war of looks, women seem to have gone the extra mile to drive men crazy.

To do this, they invented the perfume, the earring, bracelets, henna, kohl, and perfected their voice to lure the male.

In the animal world, however, it is the male that tries everything under the sun to ensnare the female. The lion has his mane, the peacock has his feathers and most birds sing and display their colored plumage in a bid to preserve their species by mating with fussy females.

Among some African and South American tribes the males try to imitate the lion or the jaguar to get wows from the females, it is genetically more profitable to sleep with a lion or a jaguar than with naked apes, would say the women, for men are simply glorified monkeys.

On the other hand, marriageable girls among some African tribes sharpen their teeth to imitate the leopard that perchance they might attract the unwary male. It is genetically more profitable to sleep with a tigress than with a chimpanzee, would say the men, for women are after all elevated and adorable monkeys.

In Eritrean tradition, the bride is supposed to look attractive before her spouse. The job is given to experienced women who start the ordeal by scrubbing the bride till she comes out shinning like a pearl. She is also fumigated (Smoke bath), rubbed, and rinsed. The women do everything short of gift-wrapping her and handing over to the nervous bridegroom.

After the wedding and accompanying feasts followed by honeymoon and the return to normal conjugal life, the spouse will remember the days she was beautiful as a morning star and will now try to struggle with her fading looks till the day she dies.

During remaining days of her life she will come in contact with henna, illam (a root of a plant used for dying the skin), kohl for the eye, herbal perfumes, tattooing, likhay (Butter), oil, charcoal for cleaning the teeth, etc.

The strange thing about our traditional cosmetology is however that it is closely associated with health. Every cosmetic application has also its therapeutic aspect.

Take for example likhay; I have seen old people putting likhay on their head. I once asked a friend the reason behind this strange practice. “It’s good for the eye,” he said. “How come?” I asked he told me that the butter flows down the skull and to the eye socket to affect an ophthalmic miracle. It also keeps the hair wet and health. It is also a sure medicine against dandruff. The problem is that unless you wash your hair within 24 hours, the rancid smell that is wafted from the hair is seldom tolerated by people of good breed.

Oil for the legs and the face is another means to enhance beauty. Growing up there were these kids who used to live next door to us, as we left for school each school day the kids would come out oil rubbed on their faces by their mother, looking like glittering tin cans. But oil on the skin has the irritating property of attracting dust. Imagine those kids playing football, just after they had been oiled for school. Most of them returned looking just like zombies from a premature burial.

In modern Eritrea though, traditional cosmetology practices such as the henna, likhay, illam, hebal perfumes and charcoal are almost a thing of the past. These traditional practices are all but completely replaced by the time consuming and expensive makeups. The mascara, foundation, powder, eyeliner, eye shadow, fake eyelashes, lipstick, lip-gloss, chapstick, nail polish, lotion, perfumes  and the list goes on and on and on.

Since I am a guy, I had to ask a female friend- bracing myself and preparing for quite a lengthy discussion- to explain to me how each of the above make-up kits are used. With her eyes glowing at the prospect of me having finally brought up a topic she considered herself an expert at (don’t all girls) she went on to tell me as follows.

Mascara is apparently used to darken and thicken the eyelashes and it is applied by a ‘huge’ brush, God only knows how many women have pocked their eyes using that kind of brush.

If women want their face skin color to look uniform and bear texture they usually utilize the foundation, this cosmetic make-up has a kit by which the makeup is applied but here in Eritrea, girls use their hands to apply it. The powder is also another kind of foundation, this sort of makeup is common in Eritrea and it even has its own kit to apply it with which comes in a form of circle cloth.

The eyes and the area around it are perhaps the most ‘abused’ part of a woman’s face, with eyeliner, eye shadow, fake eyelashes and the sort used to make the innocent eye more appealing. Yet again the eye is a woman’s choice of weapon when hunting a hapless man.

The eyeliner is used to outline the eye, generally applied along or close to the lash line. Women usually use them to draw along their eyes what they call “Wings”, not the kind that may make you fly but the sort that makes one’s eye resemble to that of a cat. “Good Grief” was my response to that illustration.

Then you have the eye shadow, which is applied to the eyelids and below the eyes to give a darker complexion. Too much of eye shadow usually makes a woman look like she has

been in a bar brawl and came out with two black eyes.

Fake eyelashes! Simply speak for themselves. I can never understand why on earth women want to wear fake eyelashes and go out to public looking like they need an eyelash cut or trim.

And the danger of having to apply them to your original eye lashes with glue is another matter all together. A friend of mine accidently once glued her left eye shut for half a day & had to make excuses at work saying she had allergies. This happened as she was gluing one of her many fake eye lashes in her left eye. Forgetting she had glue on her left eye, she closed it, causing her eye to remain stuck for a good five hours.

And then come the lips…….. Hopeless little lips, it is quite funny and confusing to see the schemes women use to either make their lips look full or thin. The lipstick is like a makeup for the lips. They come in all sorts of color and it is about the only makeup kit that never leaves a woman’s purse period. Apply it wrong and a woman’s teeth will match her lips. Lip gloss on the other hand is applied to the lips to make them look shinier. How many men have fallen for shinny lips over the years, only women who apply them know!?

After that lengthy discussion on makeup 101, I simply had to ask my friend how it made her feel to wear makeup.

“Makes me feel confident” she answers.

“Isn’t it too much work and time consuming” I would add.

“You know what; the time I invest in my face is all worth it by the end.”

“No wonder you are always late to get to places!” I retorted. Last thing I remember from that conversation was, her out lined eyes glaring at me as she put red lipstick on her lips and checked her little mirror( never leaves without it by the way) to see if she looked perfect.