PV’s Harmonization for the Wellbeing of Patients 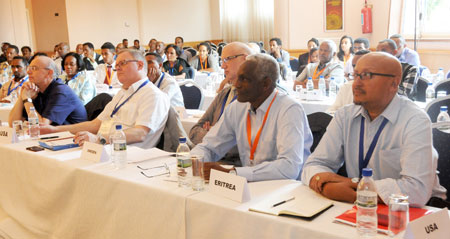 In our Wednesday’s edition, April 13, 2016, our colleague, Kesete Ghebrehiwet wrote a reportage on the opening of the conference on Pharmacovigilance held at Asmara Palace Hotel from 10 to 17 April, 2016. The weeklong advance course on Pharmacovigilance under the theme, “Developing Proactive Pharmacovigilance and Risk Management Strategies in East Africa”, also included a symposium titled the “Way Forward for Accelerating Pharmacovigilance Harmonization in East and Horn of Africa: Challenges and Opportunities”.

This conference was the first of its kind in Eritrea and hosted 83 participants from 16 African countries, representatives of the World Health Organization (WHO) at headquarters as well as the country representative, Dr. Josephine Namboze, without failing to recall the presence of Eritrea’s Minister of Health, Mrs. Amina Nurhussein among other international professionals in the health care and pharmacology sectors.

Thursday morning, the symposium started lively with the presentation of Mr. Jayesh M. Pandit, the current PV country Head for Bayer in Kenya. Mr. Jayesh focused on the question of creating a system of partnership with industry in order to enhance the safety of patients in the use of medical drugs. This first presentation brought to the table the question of sharing and collaborating with all stakeholders from the production to the suppliers all the way to the patients.

Harmonization, as the key term of this week’s conference, was highlighted once again during a lecture titled, “Snapshot of Medicines Regulations in Africa” by Prof. Alex Dodoo, in which he showed the numerous and various regional organizations across Africa, which some are overlapping and brings further challenges to the vision of having a harmonious work following the idea of Pan-Africanism. He further explained that African countries are rich in resources but do not share it. Prof. Alex stressed how the continent is lacking a harmonized regulatory system when it comes to PV. This interesting presentation was followed by a lively debate on how to share information among countries and the need for a national database in controlling the quality of medical drugs. As Mr. Mulugeta Russom, Head of the Eritrean National PV Centre explained to me, “It is by sharing information among countries that we can ensure a good quality of medicines for the safety of our people”.

Indeed, the pharmaceutical industry is a lucrative one to many companies mainly based in western countries. As medical drugs are parts of people’s lives throughout the world, its control remains an important aspect in this sector. Hence, throughout history, the continent was victim to controversies and scandals in regards to the import of medical drugs from the ‘Global North’, which were defected, fake or substandard. By far, one can witness how the continent has been prone to an immense medical trial by the multi-million rich pharmaceutics. Hence, it is of a primary concern for African countries to implement their own national control mechanism and work hand-in-hand with international organizations such as the WHO.

Accordingly, as one of the top priorities of Eritrea’s development is the access to health care to all layers of the society, and subsequently, the access to quality medicines goes alongside to this.

Without a doubt, the access to medicines and especially as regards to safety in the use of drugs are key challenges on the African continent. Consequently, the establishment of Pharmacovigilance (PV) became mandatory as to overcome such issues. In doing so, Eritrea and its Ministry of Health implemented its PV center in the country. The issue of safety in drugs and monitoring is the main mission of the PV center. In other terms, PV is the practice of monitoring the effects of medical drugs after they have been licensed for use and especially in order to identify and evaluate previously unexpected adverse reactions. Therefore, the Eritrean National PV Centre (ENPC), headed by Mr. Mulugeta Russom, established in 2003 in line with its membership with the WHO Programme for International Drug Monitoring and was revitalized in 2012 in which the ENPC became one of the six units of the Department of National Medicines and Food Administration (NMFA) headed by Mr. Iyassu Bahta, who is a senior pharmacist at the Ministry of Health as well as the Director and Head of the Drug Regulatory Authority.

Soon after, the importance of PV was spread out to health care professionals nationwide through trainings amounting of 1,851 professionals as well as the establishment of medicines and therapeutics committees in more than 13 health care facilities without failing to recall the awareness campaigns and production of medicines information bulletin. The work was certainly showing progress through an efficient reporting process in place in Eritrea. To give an example, the level of reporting passed from 46 reports over a period of nine years to 50 Adverse Drug Reactions (ADR) reports during the course of 2012. Mr. Mulugeta also stressed that the control of medical drugs was key to Eritrea’s Ministry of Health as a key component of the young country’s nation building process.

Eritrea is showing great results through and it is in a good pace and putting the country’s PV as the top three after Morocco and South Africa in monitoring and ensuring the safety of everyone in Eritrea in the use of medicines and vaccines.

Hence, the aim of the conference is to discuss the way forward in creating a harmonious control mechanism among African countries at continental level and not solely at the regional level. Mr. Mulugeta also explained “if there is a problem in certain medical drugs in Eritrea, it is possible that the problem is also observed in Sudan, South Sudan or Kenya and without a clear information sharing system, we would not be able to tackle the issue and ensure the safety of our patients”.

On this matter, the conference continued with the presentation of various high level professionals such as Andy Stergachis on “Identifying and addressing barriers to reporting adverse events following immunization” and Priscilla Nyambayo, on “Global Vaccines Initiatives and AEFI case investigation”. One of the keys to investigation is, thus, having a strong reporting mechanism and researches. On this aspect, various presentation and findings from countries such as Sudan and Morrocco were presented without failing to recall the inspiring presentation by young Eritrean medical doctors, Dr. Seltene Tewelde from the Ghinda’ Refferral Hospital on the “Incidence and Nature of ADRs in Diabetic and Hypertensive patients” as well as Dr. Rahwa Tekle on the issue of “Adverse drug reactions profile based on a retrospective cross sectional study in Eritrea under the National TB and Leprosy control program.

The symposium came to an end after various speeches by participants thanking the organizing committee and the Eritrean hospitality at large. The participants came to a common agreement in regards to the Pharmacovigilance harmonization in Africa. Accordingly, the importance in working together in order to strengthen PV in Africa was highlighted, the need to enhance a sense of national ownership of all activities of PV while working closely with regional centers, the existing continental institutions and the WHO and more importantly to have a patient-focused approach. The great atmosphere of the conference finally greeted all participants during the certificated handling ceremony.

Surely, this conference is the initial step towards the creation of the Asmara Declaration on PV towards a harmonious system at pan-African level in the future. As Pharmacovigilance focuses on the areas of medicines, vaccines and medical devices, it is undoubtedly significant for Eritrea’s health care system to continue its government commitment by enhancing the role of its National PV center through harmonization among the WHO, the industry, the suppliers, health professionals for the well-being and safety of patients and the population at large.

Of Sunday’s and Sunday Visits