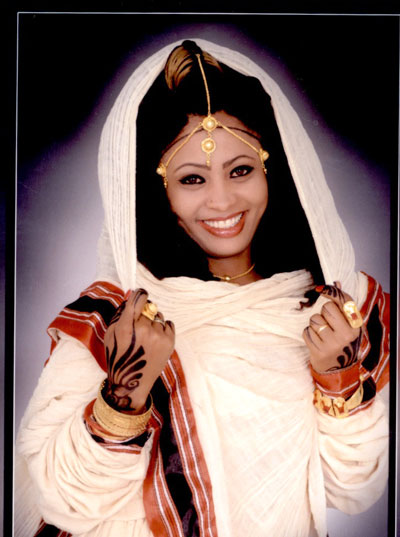 Nobody detests another Prince Charming and Cinderella Story; not even Q&A! … Another story with a fairy’s intervention, another enchanted carriage with white gallant cavalry in a pixie land and sparkles of magic everywhere!
Lately, there is this song that has been trending widely amongst the Eritrean young audience nationwide and overseas, it is about a peasant girl whom has captured the heart of an aristocrat’s son (Wedi-Mislene).
Traditional, modern and techno sounds all mixed together for the song that, I am sure, is on ‘repeat 1’ on playlist of many!
Born in 1990, we give you today, a rocking singer- vocalist Semhar Yowhanes.

The song’s story line is simple, clean and lovable. It is about a village girl secretly falling in love with a son of a royality, some sort of a prince. For her luck, the prince too has been admiring the girl and choses her to be the love of his life. Et voilà, a cute ‘happily ever after’ love story.

Why do you think people love it?

Other than the story line? The video and the music arrangement. The music has a traditional melody but the composition is highly modern with techno beats in the middle. As for the video, it is just something else. You can see how much energy and time the music and video production people dedicated in the making of the song.

The directing of the video was awesome, costume was perfect and everything else was just highly accurate: we worked so hard to imitate the real appearance of the village life style, to its most traditional form.

It is hit. From the very start, I had a gut feeling that made me sure of the song’s success.

You do have your ‘happily ever after’ too, right?

Why wouldn’t he? He’d better! I plainly define him as a celestial gift from the heavens.

Let’s go back to when you first started. When was the first time you sang professionally?

I went to Sawa with the 24th round, and there we had these awareness raising programs. I told my father I needed help, so he wrote and composed a song and he sent me a recording of it. I loved what my father did for me, I arranged it with band and I presented it in several occasions. That’s to where I track back the start of my professionalism.

Yes my father; Yowhanes Estifanos. He is an artist, and my mentor as well. He did not like the idea of me doing arts and wanted me to study, nevertheless, he always bestows his know-hows on art.

All I thought of was music. I dedicated so much time to it, so much time that I clogged prioritizing home works and studying, even failed my matriculations in Sawa. I was even singing in occasion’s events without having my father know!

So who encouraged you to pursue your dreams?

Even if you sneaked out to sing?

Yes, like I told you my dad is an artist himself, and just like the rest of the parents around the world he wanted me to excel in my educational endeavours. It is only natural right?!
And I performed great in school until I went to Sawa. It was in Sawa that I started prioritizing my artistic activities. Nevertheless, since my father is a professional artist he gladly shared his passion and the massive experience he gathered through the many of his carrier.

As to my mother, she literally is my co-worker and my partner in the field. She has so many brilliant ideas.

And at the moment?

Even though I recently started releasing my songs, I never stopped singing. That is what I do. I sing and do tours with several bands. Currently, I am focused on recording my music and working on my video clips, I will very soon, release a DVD.

How many songs so far?

There are many in progress and some are undergoing final touches, so far, I have presented a mini album of five songs. My dad helped in composing, and a couple of song writers did as well extend a helping hand.

It is just something that I do in order to keep my live performance to the audience’s mood. I often change the previous laid out strategy that the production team sets and I come up with for live concerts and shows. I am keen to connecting with my audience, and I am so very well convinced that I need to interact with them directly if I am to be part of the audience, and the audience part of me. I want us all to be harmoniously connected through my music.

You recently got married, freshly got massive love support for your artistry and I hear you are an acute student, so what are you to follow next?

I know and I appreciate all the support I have been getting for my songs, as such I am extremely grateful for it and indebted to all of the people, including my parents, that assisted me in the journey of being the recognized singer I am today.

But… but, I wish you could see what I have in mind, the dreams I dream. I know music and music knows me, it is what I do. So I will just keep on doing what I know and do my best and reach the highest level music can get me to.

What I have now, it’s practically peanuts compared to what I want to accomplish at all costs and any sacrifices!