Nature in Bliss or Jeopardy? 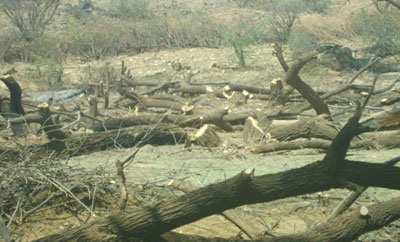 It is known that trees are the adornments of the land. Human life and definitely the life of other creatures depend upon the presence of forest, which makes it the hub of all living things. It is obvious that, the life of humans and other creatures is directly or indirectly associated with trees. Trees are natural resources that play a crucial role in food security and water conservation, in short, the important socio-economic requirements and other demands can be attained from forests. But now the condition of our trees is put under question mark, knowingly or unknowingly, improper and unsafe way of using trees led to inevitable deforestation, consequently causing desertification, unsettled climatic change, fierce drought, reduction of agricultural production, and drying of water sources.

Plants have a special merit comparing to other resources, because it is renewable resource that can be replanted. However, though afforestation program is going on effectively in Eritrea, deforestation still persists. Hence, if serious measures are not taken, the nation will face a terrible desertification and extinction of wild animals as well. The authority in charge of forestry and wildlife founded in February, 2012, has been actively fulfilling the greening program and conservation of the remaining trees. This has been done in collaboration with the Ministry of Agriculture, Land Water and Environment, National Development, Local Government, and others. In an annual assessment meeting conducted by the Ministry of Local Government in 2015, there were 35 plant nursery centers and more than 3-million and half seedlings were ready to be planted. 10% out of the stated figure are domestic trees such as olive and cedar (juniper), while the remaining 90% are newly introduced foreign seedlings, where 68% out of the total figure had shown a fine result.
Although remarkable achievements are being made in the domain of afforestation, the complete domination of foreign trees over the domestic ones has resulted in pushing trees such as olive and cedar almost to the brink of extinction. Experts carried out a research on trees being found in the edge of extinction in Eritrea, which led to the discovery of a long lost species of domestic ‘Bamboo’ trees. An experiment was made by the experts for the reproduction of ‘Bamboo’ in the College of Hamelmalo and Himbirti nursery center and turned out successful. It is confirmed that three species of Bamboo seedlings are being tested in a nursery are found in a good stage. The tall bamboo tress also have crucial economic advantage as noted in the research.

Doum Palm (Archobcobay) is also another important domestic plant, which is known for its high economic yield. This tree is especially found in a large extent in the valleys of the Gash Barka region. Nonetheless, Doum Palm is one of the trees heavily facing extinction. To ensure the abundance of these trees however, a large number of seedlings were experimentally tested in the Af-himbol area, yet again in the Gash Barka region, and rewarding outcome was being witnessed.

Another natural factor which causes to the loss of some tree species and the prevalence of only one dominant tree in the ecosystem is the spread and overtaking of trees known as the Prosopis (Temri Musa), dominating extensively in some areas of country. In general, there fifteen types of Prosopis, out of which, the two species, Juliflora and Chilensis, are widely distributed in the country. Currently, researches are being conducted to cut these types of trees and utilize them for domestic use. The process has been activated in the regions of Anseba, Gash Barka, Northern Red Sea, and Southern Red Sea. As the research shows, the Prosopis trees covered 17,491 hectare in the Gash Barak and 2,468 hectares in the Aseba regions. The disadvantage of these trees is that they possess the capacity to dominate and eliminate the trees by absorbing the underground water and make them dry, hence, the proposed solution from the research was to cut them and even dig them out from their roots.

As the information obtained from the assessments made by the National Protection of Forestry and Wildlife over the last two years indicated, there were some irresponsible individuals who pursued the habit of cutting trees for their personal interests. Knowing or without knowing, those people are engaged in deforestation of trees and the outcome. There may be so many reasons for their actions, but the result is always the same; deforestation. What is even more shocking is that all the regions in the country with few exceptional districts have become victims of these actions. In relation to trees, wildlife also depend upon it. As mentioned in the introductory part, it is natural for animals to form a connection with forest, this means, the presence of wild animals can be assured by the presence of forests. Based on this, the authority in charge of forestry and wildlife has been making studies on the general condition of animals in the country, especially meant to upgrade the number of these animals. Some animals such as elephants are currently at risk.

Concerned parties in the Gash Barka made arrangements to save elephants from the coexistent phenomenon. Elephants have been exposed to many difficulties because of insufficient water, consequently, they get into the lakes and are dying. Even though killing animals is not that much exaggerated, elephants are still being killed. For instance, as noted in the assessment, from 2002- 2015, around 75 elephants have been killed. In other case scenario, a number of antelopes died because of drought and different diseases in the semi-Island of Bori, but now since its rainy season, they are found in a good condition. Again in Kerkebet, with the expanding of agricultural areas, the wildlife habitat in the areas are being faced with great problems, ostrich is one of the victimized animals. Considering this issue, it is planned by the department of forestry and wildlife to start an Ostrich Farm around Kerkebet.Another research is also made in collaboration with the International Union of Natural Conservation about Zebras and concluded that they are in a good condition. In addition to this, there are a number of wild animals which are kept in the National Enclosure of Northern Red Sea region.Putting all these in mind, the community should understand the undeniable role of forests and wild animals, and also should stand against those irresponsible people who directly or indirectly are engaged in destroying trees and wild animals.Moreover, the society should isolate and avoid trees such as the Prosopis and substitute them with some other beneficial trees. To work hard on afforestation on one hand and avoid the natural factors that jeopardize the nation’s forestry on the other will be rewarding in reinstating Eritrea’s forestry and wildlife to its fullest.