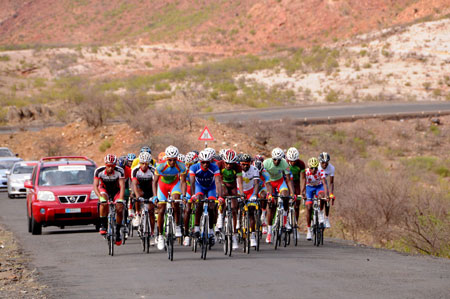 After a day off on Monday, we left Keren, the city of the mountains, at 6am on the 19th. The automobile convoy darted to Barentu through the towns  of Hagaz, Aderde, Ingerni, Akurdet, and finally Barentu. In  Akurdert, we  came across countless of young students in their  uniforms,  they started running to the edge of the street to greet the athletes with their ever bright smiles and cheers. A pleasing sight to see, I hope they made it to their schools on time!

We arrived in Baretu at around 8 am. In the starting line of the race, inhabitants of Barentu welcomed us with their beautiful cultural dances, a zealous welcome accompanied by colorful dancing with the mythical up-beat  drumming,  stomping and ‘bagala’; distinctive to the Kunama people of Barentu.

In the morning hours of April 19, 2016, as the commencement of The Tour of Eritrea 2.2. UCI category, the  Barentu- Teseney challenge kicked off. The route was extend from Barentu, Gogne, Haykota and Teseney. The race started at 9:15 am local time.

Right from the start, one could see that competiveness  dominated the spirit of the riders. As a matter of fact, there were countless break away attempts.  After 21 minutes from the start, a handful of riders maintained a successful breakaway that kept on the race on its edge for a notable time. The leading group included Elias Afewerki and Million Amanuel from the Eritrea National Team, Habtom  Tesfamariam  from Team Salina, Solomon Zemenfes from Team Tsinaat and Amanuel Megistaab of Bike Aid.

In the peloton behind the leading group, the orange helmets of Amore Vita from Italy had control in the lead. When the race time reached one hour from the starting time, there was a time gap of 00: 01: 00 between the leading group and the ever attempting peloton.

In the Gogne area, a sprint was awaiting the riders at 33 km. The three front runners of the sprint were: Areruya Joseph (Rwanda National Team), Michael Habtom (Salina) and on

25 Km away from the starting line a crucial break away happened, it slowly constituted 11 riders with a 00: 00: 35 time gap from the peloton. There was a second sprint won by Aron Debretsion (Eritrea National), Jean-Claude (Rwanda National) and Alaa Mohamed  Mohamud  (Egypt National).

Two riders: Goitom Mehari (Tsinaat) and Areruya Joseph (Rwanda  National), tried to keep some distance, but soon got joined by a larger group of riders from Amore Vita, Bike Aid, Salina and Eritrea National team. With only 10 kms remaining to the finish line, a very decisive break away was made by Million and Yonatan.

Yonatan Hailu took the lead once again with a time gap of 00: 00: 15 from the rest. He was being chased by Million and Paolo Lunardon of Amore Vita,  while posing treat to the front runners.The three had a fierce race in securing the lead spot. On and off a group they were accurately intensive in not letting loose the hold of one another. Not far away from the leading group, in a time distance of only a few seconds, the peloton was being desegregated in to a line of riders escaping the peloton.

At the end of the race, Yonatan Hailu was the first rider to cross the finish line followed  by Paolo Lunardon  of Amore Vita with 18 seconds difference. Third to arrive was Amanuel Menghistaab of Bike Aid followed by Joseph Areruya of team Rwanda.

The first stage of Tour of Eritrea was indisputably  a race of fierce competiveness. Riders from all the teams  were  literary scrutinizing each other. I talked to second place winner Paolo Lunardon of Amore Vita after the race. He said that there were times where he had trouble sprinting because of the intense charge each rider had in another, also he went on to say, that neither did the hot weather of little ventilation help .

The yellow and white Jerseys went to Yonatan, the green to Joseph of Rwanda for 66 points and blue to Paolo Lunardon of Amore Vita.

The  second  stage  of   UCI’s 2.2 category,  the Tour of Eritrea progressed  on the 20th of April, from Teseney to Barentu starting at 08: 00: 00 covering a distance of 112 km. Originally, the race was supposed to cover a route of 179 km from Teseney to Akurdet; however, during the first stage to Barentu, we came across unfinished  highway works and that led the commissioners to cut down the route to Barentu.

The Teseney – Barentu race was much different from what we have been seeing previously.  The race started in Teseney,  and this time there  were  no attacks, counter attacks or breakaways. Riders had a communal speed and moved in a big group.

Calm boys of Rwanda startled us all when unlike previous  days in  which they  commanded the group’s pace by creating a speed of their own from the very start, this time, they just pedaled along. The boys of Salina and Tsinaat did not attempt hasty breakaways,  neither did the orange helmets of Amore Vita; which we were used to seeing them grouped in the front leading the peloton.

Today was surprisingly  soothe, that even riders of Sudan National Team managed to stay with the big group for a long time. 15 km away from the starting line, two riders from team Rwanda attempted a breakaway  driving the peloton to extend, but soon clustered when the others joined unruffled.

In the second stage UCI 2.2, two intermediate sprints were included. The first was in Haykota, and the above-mentioned  attack of riders from Rwanda  team, seemed  then, that it was planned to give way to their team mate Joseph Areruya. However, their plan did not succeed, as front-runners of the sprint turned out to be Tesfom Okbariam of team Eritrea, Amanuel Menghis of Bike Aid and Mohamed  Alaa of team Egypt.

Right after the sprint, a leading trail was composed by Dawit Haile (Salina), Joseph Areruya (team Ruwanda)  and Ahmed Mohamed Osama (team Egypt). They led the race with a difference of 100 meters from the peloton.

Nonetheless the rest of the riders joined and  once again the  big group was formed.  In the Gogne area; Zemenfes Selemon, Amanuel Menghis  and Aron Debretsion  of the Eritrean national team along with Joseph Areruya of the Rwanda national team got points for the second sprint.

At less than 10 km to the end the group was still the same; uniform speediness! One rider down for team Amore Vita as Paolo Lunardon leaves the race with health problems. Amore Vita’s sprinter number 33 Paolo Lunardon is  second place holder on the first stage of the tour.

As the finish line got closer, riders of Bike Aid dashed through counter attacking their way to the finishing sprint. But they were not alone, exceptionally strategic team Rwanda had good attempts too.  Massawa Circuit’s white jersey holder Amore Vita’s Eugenio Bani, dissolute pedaling got him to the front in no time; with a fast  sprint he arrived fourth, an eye bat away from third place. His stunt sure did get him many new Eritrean fans.

All  riders, especially the  top five had  infinitesimal   difference amongst them, so little, that it was hard to tell. It took 02:54:54 for top three ‘Merons’ to finish the race. An amazing race that had both steadiness for a long time with an overly non expected stunning final sprint.

The following stage was the third UCI 2.2 stage from keren – Asmara. It covered 93  km but included a  number of  tough climbs and gradients. Trainers and managers of Eritrean teams told us, in interviews  we conducted  before the race started, that this race had to be a ‘reclaim of lead for  Eritrean teams’ for the simple fact of Eritrean riders’ familiarity with  climbing  high altitudes. Eritrean teams have been falling short in team classifications with team Rwanda resulting the strongest front runner in the tour.

The race started on the 21st of April in Keren at 8 am. Not different from the second stage race, this one too, seemed to be of no action until Halibmentel;  riders stayed in the same group. With 73.7 km left, at 19.3 km, the Eden climb came to scene. The Eden climb is a category 4 gradient of 1565 m. Yonas Fisaye (Tsinaat) got the points for it. After the climb riders sloped dawn with a new speed, that resulted to a break away for a leading trail very soon clustered by the chasers of the peloton. 20 km away the group was still ensemble.

At the outskirts of Baluwa, Tesfom Okbamariam (team Eritrea) attacked and left the peloton. Accordingly, the peloton started its expansion: with riders such as Amanuel Tsegai (team Eritrea) and Hanibal Tesfay (Salina) followed by riders of Team Rwanda, aiming to bout Tesfom.  A group was formed again.

Shortly after, an unexpected speedy attack from Kibrom Mahari (Tsiinat) divided the group in to two. Chasers began to follow him, and 00: 00: 18 seconds away the peloton kept extending. The chasers caught up with Kibrom forming a new leading group. Another climb of category 2 was awaiting the riders at Dgdg area. By then, raiders had covered a total of 47 km. Hanibal Tesfay, Mehari Kibrom, Adhanom Zemichael and Michael Habtom, got the points for the Dgdg Mountain with ease as they sustained in the leading trail.

The peloton got divided again with Rwandan chasers leaving the peloton. Hanibal and Kibrom were being followed by chasers from team Rwanda, Tsinaat and Salina. That is until when number  32 of Amore Vita, Eugenio Bani raced his way past the peloton all the way to the lead of the chasers trail.

The format remained intact until Adi Tekelezan. The last climb of the race was category 4 climb of Adi Kolom, with an elevation of 2380 m. Hanibal Tefay (Salina) got 1 point for it.

After the last mounting  sprint, the group of chasers got extended. More riders of Salina and Tsinat started charging from the peloton. Riders from Eritrean teams had total control over the head of the race. With Hanibal Tesfay (Salina) leading single in  the  front and counter attacks of 9 Eritrean riders, the finishing  part was under the control of Team Eritrea, Salina and Tsinat.

Trainers and team mangers of Eritrean teams got their expectations, as in the finish line the top nine place were all sealed by riders from Eritrean teams. With little help of his team while facing counter attacks of Eritrea and Rwanda team number 32 Eugenio Bani (Amore Vita) was the only one of a continental team to make it in to the top ten. His back and forth cycling is being highly approved by his many new Eritrean fans.

Bike Aid – Stradalli whom had controlled on the second stage of the tour did not make any impact on the third day. The second stage got Team Salina, Tsinaat and Eritrea national team at the top three of general classification. The fourth ‘Mendefra – Massawa’ race of 172 km, was yesterday won by Eritreas very own Elias Afewrki.

The top ten riders who reached the finishing line were all Eritrean riders with only one non- Eritrean rider in seventh place: Eugenio Bani (Amore Vita). He arrived 05 seconds behind first place, he keeps repudiating to stay behind Eritrean colleagues, accustomed with the Eritrean geographic composition.

The last stage of the 2.2 UCI category will be carried out today April 23, with an uphill route from Massawa to Asmara.