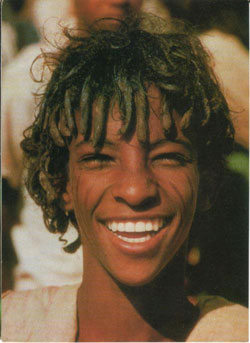 Blessed   are   the   chickens, for  they never know the pain associated  with teeth, a pain so atrocious  that it has caused and still  continues to  cause brave men to weep and wise men to go insane.

I know of a certain man in the countryside who unable to bear the raging pain that had its epicenter in his decayed molar, took up a big stone and struck his cheek a heavy blow with it, knocking out the bad tooth along with two good ones. He didn’t know what he was doing until he saw blood oozing from a hole in his check.

When we grow old, we are lucky to lose all our teeth, molars and all. Good riddance! No more tooth-ache  and no more dental appointment.  Don’t bet on that yet, say some religious people. When you go to hell, the demons will be  there waiting for  you with sets of teeth on a platter to be distributed  to the tooth-less. Why? You ask. Well, how else do you expect the damned to grind or gnash their teeth in pain as the roast in the blazing fire?

The problem starts with teething. It itches, isn’t it? Could that be nature’s way of making fun of us? It may be itching now to herald its arrival, but wait just a little and it is going to hurt heralding its departure. The Eritrean child is given Kitcha or similar product to alleviate the infernal itch.

When we were kids and saw our milk teeth falling one by one or had to have them pulled out by big brothers, Dad or the Dentist, we threw them to the direction of ones village of origin (Meboqol Adi) and in the name of St. Mary we said I give you bad tooth, you give me good tooth. We knew nothing of the tooth fairy.

As we grow old we could sense the desire of some of our teeth to leave us for good. But some of our elder brothers did not wait to get old to part with some of their teeth. A simple fight did the job. The punishment for not listening to Pa or Ma was that they could not smile as long as there was a gap in their set of teeth. But once they could somehow manage to have the gap filled with gold teeth, they laughed the whole day to show their newly acquired gem.

Still young, I came to realize that girls, unlike boys, made good use  of  their teeth when threatened.  I have seen a friend who was unfortunate  enough to lock horns with a neighborhood girl. If I hadn’t separated them on time, he might have been chewed alive. “Come and fight without your nails and teeth if you are a real man,” he said to the girl shaking all over with anger. The girl laughed at being called a man. She had seen him biting right and left during previous fights with boys his age.

In our culture, next to good looks and long hair, a beautiful set of teeth is a valuable asset to a marriageable  damsel. Girls should have a set of teeth as white as milk, say most suitors. How about them? Do you think girls do not care about boys with teeth also?

About thirty years ago, there was a tourist poster of a Beni Amir boy whose set of teeth made the producers of Colgate or Signal think twice before embarking on a new formula for tooth decay. What did that shepherd  boy eat or drink to have such a marvel of teeth? Most probably he drank goat milk all the time, ate sugar- less food, brushed his teeth with various twigs, washed his mouth with water and salt, ate lemon fruits and gnawed at akat(Fruit of the Doum tree).

In the countryside,  youngsters do  still use  charcoal to  scour their teeth. You take a piece of charcoal, scrub every tooth with it and rinse. The fleshy inside of a lemon can also be used for the same purpose. “I remember one day meeting a foreign dentist who arrived in Eritrea to practice dentistry.” Would start My Granddad on one of his many stories. “He had been here for a year and told me that as long as Eritrean kept on crunching kolo (roasted chick peas) and Kitcha with their teeth, there was no any future for him.”

As biscuits and candies invaded the country accompanied by ice- cream and pastry, the dental clinic of the said dentist was invaded by moaning and groaning dental patients. And he  lived happily ever after.

“What were Eritreans doing before  the  coming of  Italian Dentists?” I once asked my aunt. “Eating meat and crushing sheep or goat bones with one’s molars during holidays kept one’s teeth healthy,”  she said. “It was with the  introduction of  sugar that the problem arose.” She told me that if ever people suffered from tooth pain, there were herbs that took care of that. “How about a decayed tooth that needed pulling out,” I  asked. “The blacksmith was around to the operation,” she said.

The blacksmith or anyone who had a strong stomach would come with a pair of pincers and that was more or less like a declaration of war on the stupid tooth. After wrangling with the bad tooth for hours (sometimes  falling back-ward with  empty pincers and swearing by God to get that stupid tooth yet even if he had to try for eternity), the operation was over. The hero of the day held the bad tooth dripping with blood and piece of flesh probably  from the gum. Quickly, put  some cloth or even a lump of soot to stop hemorrhage.  Thank you mister blacksmith, you deserve a chicken for a job well done.

Mr. Gebru is an old man. He has no teeth. But then he uses his gum to crush roasted beans and recounts of his exploits when he was young. “I used to crush bones with my molars when I was only sixteen,” he likes to boast. No bone from an Easter sheep was spared. Tarzan his dog never forgave him for that. “I used to open beer bottles with my bare teeth,” he continues. He never waited for the bar woman  to go and fetch the beer opener.

Given the  opportunity, other impatient boozers availed of his free  services which eventually caused his teeth to fall one by one.“I didn’t know at the time I was making a mistake,” he admits. The toothless lion is now waiting for his children in America to send him money to repair the damage he inflicted on his teeth when he was young.