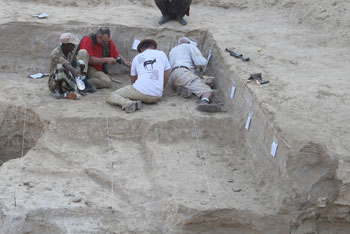 The field work at the Eritrean Danakil depression of the Engel Ella-Ramod region has been started on late 2012. This research project was initiated solely with the aim of scientific research collaboration between the National Museum of Eritrea and the Catalan Institute of Human Palaeoecology and Social Evolution (IPHES).

To date, four field seasons were accomplished and the discoveries are a breakthrough knowing the previous record of research in the region. The aim of the scientific expedition was to conduct systematic survey and determine the importance of Archaeological, Paleontological, and Geological record of the depression. Moreover, to conduct a paleomagnetic study in order to understand the age or geological chronology of the sites.

The Engel Ella-Ramod Basin located about 20 kms south of the archaeological site of Buia, where a mostly complete human cranium was discovered two decades ago,  is part of the northern end region of the Rift valley, and it is a newly discovered basin. It shows a new complex of sites with a very good paleontological and archaeological record.  Within the territoty of this basin, a rich abundance of fossil animal remains and stone tools with age range between 5.0  million years until present have been discovered. These artefacts have been documented from a sedimentological record, with a thickness of more than 300 meters. The large mammal fossil record corresponds to felids (family of cats) and hyaenids,

elephantids, equids (horses), giraffids, bovids (buffaloes, large antelopes, gazelels), suids (pigs), and others. The discovery of a pig mandibular specimen helps to conduct a biochronological correlation. In this balance, the Engle Ella pig falls within the Early Pliocene chronology that is, most probably, between 5.0 and 4.0 million-years-old.  This period is crucial for human evolution, as it has been already known in different eastern Africa sites.

The stone tool technology from the Basin corresponds to the Mode 1 (Oldowan) and Mode 2 (Acheulian) techno-complexes. Quartz was the most used raw material to make artefacts, most of all by means of a unifacial and unidirectional reduction method that

allows to obtain flakes with long cutting edges. The Mode 2 lithic assemblages include well made handaxes.

Taking the geological position and preliminary evidences into account, the Engel Ela Basin, is supposed to provide new information on the evolution and diversity of mammal-fauna of the Pliocene fossil record (including potential hominins), not yet known to science from this region.  The Basin has a great possibilities for offering new evidences completing the known fossil record from coeval well celebrated eastern Africa palaeo-anthropological sites ( that is, Ethiopia, Kenya, Tanzania… etc.).