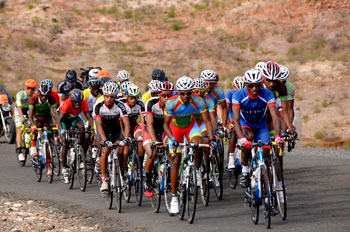 Q&A today will take you outside of Asmara. That’s right, in the vivacious season of the most followed and love sport, we too, will be traveling with the Tour of Eritrea 2016. The tour started on the 16th for its 6th time and eight UCI recognized national and continental teams are participating. The participating teams are three from Eritrea, including the National team, followed by national teams of Sudan, Rwanda and Egypt. Amore Vita of Italy, Bike Aid from Germany of which three Eritreans are members, are taking part as well.

Cycling has for decades been a sport that become part of the Eritrean tradition, as such any cycling tournaments no matter the size, and of course this one too, are avidly followed by all generations.

Q&A will be talking few of the many youth cyclist participating from around the world, whom are truly sparkling the tour with their enthusiasm.

Joseph Areruya, U23, team Rwanda highest scorer in the tour. His team has been coming up with ever new counter attack tactics. Along with team member jean Claude Uwieze, Areruya is preforming well in tour.

Team plan, I guess. My team, the Rwanda National team, focuses on advancing as a team. We work together even if it is to have one rider advance. Nonetheless Eritrean riders are so good that sometimes their tough challengers.

The first challenge, the ‘Fenkil Challenge’ was the hardest for me, maybe it was because it was my first time in a complex landscape as yours.

Personally my biggest challenge is the weather, it is really dry and has little exposure to air. I keep getting headaches, but I like being here racing in the tour, and so if I could I would want to participate in future Eritrean tours. We have been getting great support from the people that are following the race so I am really thankful for that. And I am looking forward to the rest of the tour.

Tour of Eritrea 2016, it is going so far so good. Nothing is new for me really, I have had prior exercises of altitudes, slops and much more. Nevertheless, this is my first visit to Barentu and these areas. It is very hot and it has little ventilation, but we kind of forget about it once we start racing.

You wouldn’t guess how grateful I am for all of the attention I have been getting from my trainers, my teammates and my fans.

I am one big believer of ‘team power’. If the team has good strategies, like the Rwandan team in the tour for example, added to synchronized team work, then that would be more than enough for me. As such my Salina teammate and I, we always work to have a joint configuration. As for me personally, I play for the team and team plays for me.

What makes the Tour of Eritrea 2016 very special is the versatility of teams that are participating. Team Rwanda is a surprise, they are very strategic. While team Egypt their strength is in riding together. Bike Aid and Amore Vita have a lot of experience and Eritrea National team has strong riders, therefore the race it is really interesting.

The moment with the biggest impact for me, was the first stage of the tour: that was when I got my yellow Jersey. My plan is to keep it longer. And I also have plans to grow in this profession and follow the lead of my Eritrean seniors, whom are making history on international stages. I wish my partners all the best in the tour and in their future carrier. I will do my best to not let my teams’ and mine fans dawn. I will do my best to excel!

I am from Pisa, Italy and I have been riding with Amore Vita for two years now. My parents have always been in to professional cycling and that is where I acceded from the passion I have for what I do. It is my first time here in Eritrea and my impression is “troppocaldo” (too hot)!

The one thing I researched for and was real scared of was mosquito bites, good thing I am feeling good so far!

I noticed so much of your country; it is still underdeveloped compared to countries of Europe, nonetheless people told me that you are on your way headed for development. I hope for you to realize all the feat you are striving for.

As for the technicality of the race, I have to say that wining in such races is not of an easy task for riders who are used to cooler places and relatively low altitudes.Even so, I am and still will, do as much as I can at least to honor the invitation for me to participate in the Tour of Eritrea 2016.

All of the guys in the tour are talented, nice and cooperative, it gives me pleasure to be in the competition with them.

The hardest race here for me was the first race, the ‘Fenkil Challege’, it was our first challenge in Africa plus in addition it had quite some hard climbing for first timers. I keep thinking that maybe I could have won the second one, the ‘Massawa Challege’. But I couldn’t escape I was being attacked.

I really wanted to win in the tour’s second stage, but unfortunately, I was left with no partners from my team: one of us got sick and abandoned the race and the other one has come down with a cold. And I am a sprinter I could have made it in the top,however, I keep lacking of support while at the same time my attackers keep growing by the day. Bike Aid were in four and they helped each other throughout the race, had I had that kind of support I think I could have made it too.

… We have a lot of climbing to do. I think, I hope that my team could make it in the fourth stage and in the Asmara Circuit; it would make me really happy to at least win one stage before going back home.

It has been an amazing experience so far and I know it will keep on being so in the coming stages. I want to keep on doing well so that perhaps I can advance to bigger clubs. Thank you so much for having us participate in your tour!

I love Eritrea I am no stranger to Eritrea. I have Eritrean friends back at home, in Egypt and in the country as well, they even came to greet to the airport! I have been here several times.

The tour of Eritrea 2016 is hard; ‘good hard’. The elevation and the down hills and then the long flat roads of Red Sea region and Tessenei, they all make up a good and a very interesting racing route.

Even though my team has prior experiences in big leagues, such as the Arab and the African championship, your riders are amazing! They are extremely talented, and since there are 18 of them participating in the tour it puts us to a disadvantage, for the reason that they are all good mountain sprinters.

My coaches is convinced that I can gather some points in the Keren – Asmara race. I think I can do alright in climbing.

I am sure my teammates are pleased, as much as I am, to be part of this extraordinary experience.

At the end of the day, in all kind of sports what matter are principles of integrity. I respect all of the riders, and I am happy that I am racing with such wonderful ones: for me that is my principal win.

I was born and raised in Asmara. I have been racing professionally since 2007, I think I was 15 years old. And now I am with Bike Aid and previous to that I was with MTN Quebeka for two years. I have preceding experience of the Tour of Eritrea as I had already took part in in 2013 with the National team.

I can see that this years’ is even better, it is more structured. There are teams participating from Europe as well, the competition is a lot better now, extremely competitive. I got to be stage winner of the tour’s second stage. I am glad I practiced beforehand; I came here two ahead for a re-check of the geographical composition of the tour’s landscaping since I have been away from Eritrea for some time, some reminder checks were essential.

I also have to mention my teammates’ effort, I feel exceptionally proud and grateful of my team they literally worked for me to win.

The most challenging aspect that I have to face here is the fact that 3 riders of my team are non-Eritreans therefore they are not familiar with the nature of the tour of Eritrea, so the remaining three Eritreans in my team we’ll have to meet up to the standards of our 18 compatriot colleagues. And no jokes, Eritrean cyclist are experts in climbing.

I think Eritrea National team are our strongest opponents, but Amore vita as well, they are good sprinters. But then again I believe every single one in the race is my personal strongest opponent, because each of us have a special forte. All 44 of us!