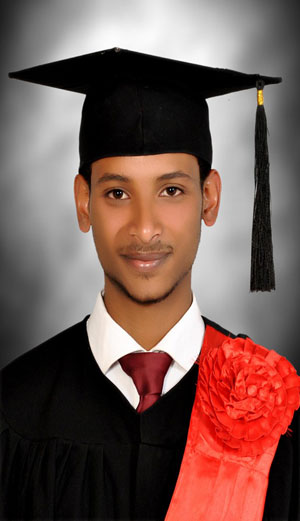 “Knowledge is power” is among many educational adages, and is one of the oldest so far presented when talking about education, but only a few of us fully exploit the advantages, intellectual superiority and societal harmony knowledge is deemed to present. Today’s guest is one who at a young age, seems to fully grasp the dividends knowledge possess.

-Can you tell us  about your background?

My name is  Yonas Menghis, I was born in Massawa in 1990 and grew up in Asmara. I went to Finland mission for my elementary and I  did my junior school at Dembe Sembel. After that I went to Denden Secondary School.

Well I was an average student in my early days, but when I was in Warsay Yiekalo secondary school in Sawa I was among the prize winners of the fourth block and I stood   in 3rd place wining prize from the social stream students section. And finally the great award of Zagre did not skip off my hands in 2008.

Simply, it is a place where you learn social life. You get to live with at least 150 individuals from different walks of life throughout the country.  It is a site where a lot of languages  are spoken and different  characters  are explored. It’s in Sawa that you learn how to interact with different people and learn to work hard. Besides you get to make great friends. It sure is a turning point for the youth.

After getting progressive results in matriculation  exams, I joined the  College  of   Business and Economics in Halhale. I majored in   Economics  and   graduated with an honor BA degree. I also continued my education in SMAP institution of training, research and consultancy in order to round out my knowledge. I took a Business management  with an elective in Accounting and ICT. I also have certificate for maintenance and web design from dynamic computer center and a first level network certificate from CISCO that is the CCNA certification.

My major contribution  began when I  was in  college. I  was studying poverty and  how  to alleviate it, which was a key part of my undergraduate thesis. That time I  needed a  practical application of my research.  Then I had the opportunity to  participate in  a project conducted  in cooperation between the Ministry of National Development and the UNDP. My main role was that of an analyst, meaning inspecting how people will react to certain economic changes and suggest a solution. The project focused on the rehabilitation of the war torn population  and getting them back on their feet, before they were exposed to absolute poverty.

-What was the aim?

The main aim was food security and the creation of self-reliance in order to have a stable standard of living. The project was carried for about a year and the people were provided with startup funds such as livestock and specialized seeds and training in order to use their resources efficiently  as  well as medical treatment.  These people responded positively to  these actions and they were able to make remarkable progress in their life in a year. Overall the project was a success and it proved that Eritrea is working very hard in order to fulfill the millennium development goals.

My  second project was  the promotion of  the  modern and smokeless traditional Stove (Adhanet Mogogo). The improved stove has been carefully designed by Engineer Debasai, to ensure complete, efficient and combustion of the fuel used in it. The design of the improved  stove combines traditional  values   &   modern thermodynamics concept. My role was to create awareness in local communities, especially women and  to  promote the  ‘Adhanet’ stove  in  methods of  its  food preparation and to adapt it as an integral part of their lives. The project was supported and funded by the European Union. It was also nominated for the Innovation Prize of 2014, which is awarded by the ‘African Innovation  Foundation’. After a hard work and a preparation of a sound business plan for the innovation  on how it could also be customized to fit other African communities’  energy needs. We took the case of Mozambique and I was in charge of preparing the overall business plan.

-Was it a Success?

The business plan was a success and the innovation as the matter of fact, engineer Debesai was awarded 1st price for the energy innovation of the year in Sweden in 2014.

-Ever been engaged in  other works outside your field?

Yes,  I   have  participated in several other projects which are not related to my major field of expertise. After observing my IT skills, I was recruited  by Dawit Ghirmatsion  who was the head of information technology in the public library,  he enrolled me in a  short term course which was organized by  Bashu association from Italy on Linux administration and  local area networks. After completing the course I worked on the development and establishing of the Digital library in the Asmara Public library and City Library (Ex British library).

-What is Education to you?

I believe education is a key in order for an individual and a society to develop and flourish. Education expands your common sense and allows you to see the bigger picture, allows you to think in a reasonable and sensible manner. It also gives you a winning edge in your life and can also contribute toward others.

I  personally think, what our Government is doing in the sector of education is great. For starters, it is free. There is no free education even at the highly developed countries, at least all the good schools aren’t. But  in  Eritrea the  government provides good schools equally to everyone. And I  personally am grateful. The educational standards here are quality and I would like to advice students to use the good opportunity they have.

-any  challenges you experienced?

Well, I  have faced challenges in my life but I think that they are not different from other problems. But I could say that when I was in college I used to have health problems related with my back and I used to spend a considerable amount of time in the hospital and pain killer medications. But still I managed to get where I wanted.

My dream is to work in any project that would contribute to the national economy and will result in the increase of people’s welfare and standard of living.

-Do you think as a youth you have used your time well?

I  think I  have used my time properly but I can’t say that about myself only  other  people can comment on my proper time usage but I will say this, I like to learn whenever I  get the opportunity, participate in projects and I also like to share what I know with whoever is interested.

I  am currently working as  a graduate assistant in the College of Business and Economics in Halhale, besides, I  am doing a  research focused on bringing food security solutions and microfinance.

Yes, I  would like to say we are the outcome of our everyday actions. Everything  that happens to us is not a coincidence, but the response we get from our doings. Let’s work hard to improve our lives and become a better society. Let’s use our time wisely.

“To throw a stone in Green not in Grey….” A comprehensive perspective

The Camel Marches while the Dog Keeps on Barking