The Camel Marches while the Dog Keeps on Barking 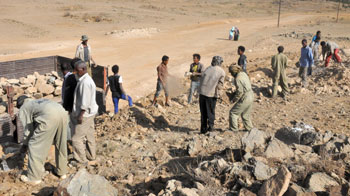 “The camel marches and the dog keeps on barking”,  is a proverb frequently   used   to    describe the  political  character of   the Government  of Eritrea. Eritrea’s national symbol, the camel, reflects the  country’s political behavior and symbolizes its real existence, as many other political entities, especially  historic, represent  and glorify themselves  through  using the imagery of animals.

The camel is not an animal of luxury. It is an animal of necessity for people living – surviving – within one of the most challenging regions of the world. Endurance and strength are qualities, amongst others, that distinguish the camel from other animals. Considering the  geographical location of Eritrea, considering  its fractious neighborhood,          considering the  competitive politics of  the region, and considering the often unrighteous international system, any  political  organization that attempts to  lead  people to  its destination must  be  as  strong, as patient, as confident,  and as steadfast as the camel.

Over many years, Eritrea’s people have withstood wars of aggression and conquest, as well as injustice and iniquity in front of the seemingly blind, indifferent world. Through much  sacrifice and patience, Eritreans eventually gained dignity and independence.

The current international economic and political system is characterized by shallow rhetorical flourishes, lofty  doctrines, and unfulfilled promises. Many of the criminal, ignominious deeds of the colonial period remain, yet appear in a different way.

The poor remain betrayed by political leaders that  yearn for power, while only a few leaders muster the courage  to resist and fight for a better future.

…The South is assigned a service role; to provide resources, cheap labor, markets, and opportunities for investment…the primary threat to these interests is depicted in high  level  planning documents as  “radical and nationalistic regimes” that are responsive  to popular pressures  for immediate improvement in  the  low  living standards of  the  mass and development  for domestic needs (33).

The USA, the lone global superpower, along with its global proxies, aims to deprive the weak and  control the  vital resources across the world. Force – and the threat of force – is a key instrument of world order and the silencing of opposition. And it often works as per the plan. Everywhere, we see  illegitimate, irresponsible governments  sitting on seats of power while serving the interest of others. Failure to respect the order is considered a great transgression and it brings sanctions and reproofs – harsh rods of discipline. For years, the Government of Eritrea has been in the line of that “rod of discipline” for seeking to implement policies that are beneficial to Eritrean people first and not foreign interests. The Government has  been  traduced by accusations, while it provides schools for children, hospitals and clinics for patients, roads and dams for the population, liberation from dependency, and organization and power from being scattered and powerless. Today, disobedience to forcible servitude to global power is a severe crime meriting harsh punishment.

In  reference to  this “political crime,” Chomsky states that:

“Radical and nationalistic regimes” are  intolerable in themselves, even more so if they appear to be succeeding in terms that  might  be   meaningful to oppressed and suffering people. In that case they become a “virus” that might “infect” others a “rotten  apple” that might “spoil the barrel” (36).

The  confidence and  courage exhibited by Eritrea has caused chronic headaches in the “power centers”  and instilled  a fear that confidence and  courage will spread to  others. Consequently, to contain that threat, the people and Government  of Eritrea were punished to extinguish the threat and diminish possible expansion of the virus. Despite the repeated great blows inflicted by the wicked sword, the people of Eritrea harvest a splendid victory in defending and developing their homeland. On the UN’s  Millennium Development Goals, Eritrea performed admirably, particularly in relation to education and health. Importantly, these areas are effective tools in enhancing the  empowerment of   citizens. Christine  N.   Umutoni,  Head of the UNDP and UN Resident Representative in Eritrea, described the considerable progress made in Eritrea by recently remarking that the “country produced the most out of the least.”

Since the  liberation struggle, self-reliance has been the approach guiding  the   country’s  pursuit of  progress, development, and independence.  The EPLF stood firmly, fought courageously,  and worked confidently to adorn Eritrea with the vesture of independence. In  1991, a  century-old iniquity and misery came to an end, and Eritrea celebrated the  glory of independence. After independence, the one-time liberation movement turned  to  government to  lead the  country forward. It  was  a government  chosen not only by mere ballots, but by the price of life. It carries all the past pains and hopes of the future on its shoulder.

Eritrean   Independence  was a bitter reality which the world found awfully difficult to swallow. When Eritrea was busily engaged in reconstruction and rehabilitation of the war-torn country, another war – with a new name but with the same old goals – broke out in 1998. Eritrea was derailed from its path towards progress,  but it did not remain hostage. After the war, the Government launched the Warsay Yikealo campaign to heal the wounds caused by the invasion. The international journalist, Robert D. Kaplan, writing in The Atlantic, shared his own observations  in 2003:

Eritrea is the newly independent, sleepily calm,  and  remarkably stable  state  of  Eritrea. While the  West  promotes democracy, market  liberalization, military demobilization,   and  the  muting of ethnic hatreds as necessary to domestic tranquility, Eritrea, at least for the moment,  provides  a rejoinder to all that. The country has achieved a degree of non-coercive social discipline and  efficiency enviable in the developing world and particularly in Africa—and it has done so by ignoring the West’s advice… (Kaplan 2003).

Eritrea, focusing on  equality and social justice, scaled the walls of  hostility and  encountered a new dawn. The people internalize the concept of self-reliance  and work hard to improve their lives. The country’s men and women enjoy equal opportunities, schools and  hospitals have  been  built everywhere,  roads reach out to all  regions, all  ethnicities and languages are united in diversity, and the people generally  live in harmony and stability. We kindly and humbly – yet firmly – tell the rest of the world that Eritrea is  a  country where advantages and   disadvantages are   shared equally among citizens without distinction.

Eritrea is for Eritreans. History repeatedly attests, the West cannot legitimately tell us what is best for us. How can the one who ignored the right to self-determination of Eritrea, the one who encouraged and  assisted the  annexation of Eritrea, the one that made massive demands of us, the one who trained and armed our killers, the one who  engineered and  supported unjustified sanctions to  restrict our progress, the one who put salt on our wounds, profess to care about the rights and prosperity of Eritreans? We are not the people to laugh about their mockery. We do not have the ears to listen to the “advice” that so often stunts or paralyzes. It is only we that can be the people to decide what is best for ourselves and our nation.

The hostile position of the many “special interest” groups aligned towards Eritrea illustrates the English proverb stating that “no one ever kicks a dead dog”. Eritrea truly lives in its own boundaries. Needless hostility attempts to push and pull toward failure, but resistance  is vital. Regardless  of the persistent barking of dogs, we, as camels, will dare to continue our long journey.