“To throw a stone in Green not in Grey….” A comprehensive perspective 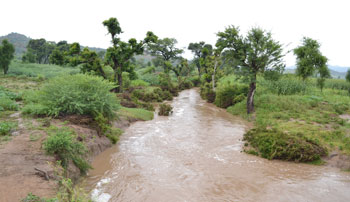 The current status of trees in Eritrea according to the statistics presented during the annual afforestation day by Mr. Abraha Gharza, Director General of Forestry and Wildlife authority at the Ministry of Agriculture was described as below average. In his own words, Mr. Abraha told Eritrea Profile that it would be an exaggeration to say that forestry is in a good condition and at the same time it wouldn’t sound right to say they are in a bad condition as it implicates that we are not doing our best.

Back to history when Eritrea was colonized by the Italians, we came to know that Eritrea had 30% coverage of forests. And during the time of federation, which is between the 50s and early 60s, there was about 11% forest coverage in the country. During the reign of the Derg colonizers however, the country faced a huge loss of human and material resources including forestry due to the consecutive wars. The present time shows that only less than 1% forestry coverage is available. Nevertheless, to reverse this declining numbers it is in the hand of the society and the concerned parties, and as the authority disclosed, they are already on the march since the last 10 years.

Basically, the forestry and wildlife authority located inside the premises of the Ministry of Agriculture is composed of three branches. These three branches include the forestry resources, animal resources, and the protection of both forestry and wildlife. What Mr. Abraha affirms as an achievement is the winning over the society’s mindset that everyone expects the afforestation day on May 15 every year. Not only the people of major cities but also people of far areas in the country.

The theme, “Vigorous Effort to Greening Campaign”, is on track and according to the latest study findings, around 483 green clubs are formed to assist the program.
Contrary to that, it is natural to see irresponsible individuals who toil to cut trees for their personal interests unlike the noble works of majority of the people. Some people tend to cut trees massively just for the benefit of themselves and their families.

The authorities of the program warned that every single activity and area is under a strict control, since they are in the construction not destruction avenue. The authorities says that they cannot tolerate any single person to cut trees for any purpose. Some parties claimed what if they can chop down unproductive trees like prosopis (Temri Musa) for charcoal and limestone production uses, yet Abraha Gharza strongly condemns uttering a reasonable statement, “Dhri selefa entay terefa”, roughly denoting, they won’t be allowing any single tree to be wasted for personal uses even trees like prosopis, since people cease not to cut trees when they find out what they call unproductive trees are finished.

Besides, native trees which are in less amount compared to imported seedlings are being revised by the authority as long as their importance can be utilized for personal and more of medical uses like pediatricians prescribe it. Areas like Adi Sheika and May Tsebra are the only centers where only native trees are planted and kept. The institution is making several researches to keep the native trees like Bamboo and distribute them in the country and get advantage out of them. The Ministry of Local Government being the active participant and stakeholder of the program is making a significant approach in developing the program.

While stating the benefits this program has so far provided to the society, Mr. Fitsum Hagos, a highly expert of wild life protection and the chairman of the afforestation program listed the economic benefits various communities achieved including (Amexi’s, as presented in previous part), ecological development the environment inherits, social services people acquire by using trees to their advantage in accordance to their needs, the introduction of the smokeless stove (adhanet mogogo, 90% in Central region), and also the chance to expand enclosures and so much more. To the issue of enclosure, the institution divides it into four parts as National, Communal, Regional and Bull’s enclosure. The national protected parks in Eritrea are around four, which are Northern and Southern Red Sea, Burie Hawakil Irrori, Gash Setit Elephant’s park, and Dahlak area. These protected parks show a sound aftermath in increasing the number of wildlife in the nation. Wild animals that are rare in other parts of the world dramatically are in a very decent amount and stage in these parks as the last 10 years statistical reports and according to the expert of the wildlife protection, Mr. Fitsum, animals such as soemmering gazelles, wild ass, nubian ibex are quite advancing in number than any other country in the world. Despite the greater kudu’s extinction in last times due to illegal hunting and deforestation, at this times they are reviving in the Northern Red Sea region. Relevant researches are constantly being conducted on the wildlife importance and how these animals can sustain in specific areas of the country. A sample of 50 quintals of sorghum was sent for a test to the Gash Barka region as a nutrition for the wildlife (especially for ostrich, antelopes, wild ass, zebra species  and others) that are flourishing in number nowadays.

Sites such as Antore and Tekeze are well known as habitats for elephants, yet it is becoming common to see six to seven deaths of elephants every year. The main reason the authorities are pointing for the loss of these animals is the conflict that is arising between people and these animals. As these elephants move in search of water, they are becoming victims, farmers also are hunting them in the native areas to advance their farming activities. Then and there, to comfort their living we find them fleeing towards the north due to these man-made consequences in their life.

The extinction of other animals  isalso a threat to the nation’s wildliferesources. Accordingly, immediateactions are considered by theforestry and wildlife authority to make enclosures, and the aim lies to make it “forbidden enclosures”, as far as the availability and safety of these animals is concerned. More ponds need to be constructed for keeping these animals, because they consume about 200 liters of water and two quintals of food daily. As a matter of fact, 44,000 hectares in the Gash Barka region is an enclosure for wild animals. Moreover, the Anseba Region is a region where the critical indigenous species of Nubian ibex is found, but it is a region where mining industries are located which in turn creates discomfort to these species.

The region has plenty of antelope species that are in good condition so far like the red fronted gazelle, dorcas gazelle, and soemmering gazelle, then for the better of all the authorities require a quick formal enclosure to be made for these animals. If we look at the Northern Red Sea Region, it is a region the wildlife and forestry authority is proud of, as the Afar society in there believe God provides rain not for them but for the animals and trees then it is common to see animals and trees are well preserved and taken care of in this region.

But what the authority underlines as natural riches and beauty is the abundance of hundreds of bird species in Eritrea. Eritrea is a unique nation which possesses a mosaic environment; highlands, lowlands, river banks, forests, deserts, and water bodies to be a sanctuary for around 700 species of birds. Eritrea termed as a “refuel station” as the birds from Euro-Asia migrating towards Africa rest in it. It is a strategic place of the East African bird’s flight route towards the North and South. The main emphasis is in the forestry and wildlife protection; the statistics of the authority shows that the Gash Barka and Southern regions, in the last 10 years, have a slight downward figure as regards to the afforestation activities, where deforestation is prevailing to some extent, while the other regions are registering a satisfactory result on the afforestation program. Mr. Abraha Gharza underlines that a means of alternative and ecofriendly energy has to be presented as quick as possible if we are to combat deforestation and if the country is to score a consistent and progressive results in making the  whole environment extra green.

Independence Torch in its first week in Anseba region