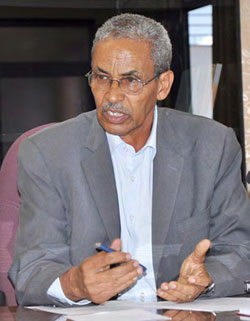 The Minister of Transportation and Communications, Mr. Tesfaselasie Berhane disclosed that strategic infrastructure aimed at ensuring the basic needs of the public and significantly contributing in the national development programs are put in place.

Asmara, 02 May 2016- The Minister of Transportation and Communications, Mr. Tesfaselasie Berhane disclosed that strategic infrastructure aimed at ensuring the basic needs of the public and significantly contributing in the national development programs are put in place.

In an interview the Minister conducted with Erina in connection with the Silver Jubilee Independence Day, he explained that in the past 25 years of Independence, strategic roads connecting as well as narrowing the living standard of cities and villages have been constructed. The strategic roads include the 14,560 k.m. of asphalt and dirt roads connecting Massawa-Rahaita-Assab, Filfil Solomuna-Gahtelai-Si’eb-Afabet, Asamar-Tesenai, Asmara-Massawa, Asmara-Aqordet-Sawa.

The Minister indicated that with the efforts exerted to develop aviation services and in cooperation with different Airlines Companies the Airports in Asmara, Massawa, Assab, Nakfa, Tesenei and Daklak Islands are accommodating local and international flights. The endeavor to further develop the aviation services is ongoing, he explained.

He further pointed out that the development of ports has a big influence on the economic, industries and mines development, and that in 2005 the Massawa-Assab Ports Authority that is responsible to oversee the development of the ports was established. The achievements that are being registered with the renovation of the ports to accommodate big ships, the big cranes, the modern docks for small ships as well as the expansion of the Sigalet Ketan road are vivid examples on the ground.

With regards the development of postal and Internet services, the Minister disclosed that efforts are being exerted for their efficiency and development. He further reiterated that 44 types of stamps depicting tourism and historical sites have been issued.

With reference to the telecommunications services, the Minister said that modern telecom equipments are put in place with the aim to provide efficient services. The introduction of mobile phone services is growing and the coverage is almost nationwide with remote areas of the country becoming beneficiaries. The infrastructure of WI-FI is already put in place and ready for providing Internet service.

Eritreans residing in the Diaspora put wreath at Martyrs Cemetery