Short Story of Ordinary People during the Armed Struggle… 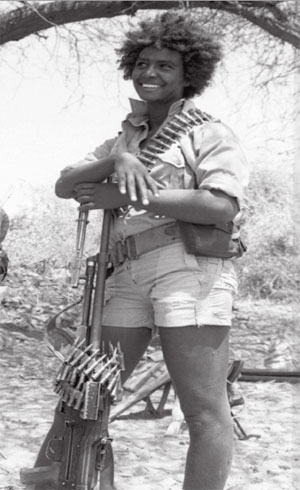 As we are in the historic month of  May, the month which heralded the victory of the 30 years long struggle and the liberation of Eritrea, we are fast approaching its 25th year silver jubilee anniversary. We will give you a glimpse of the life of ordinary Eritreans during the 30 years of war through short stories. Here is the first of its kind.

When the EPLF launched attacks against the Derg regime in the towns of Dekemhare and Keren, the former was liberated on the 6th of July, 1977 and Keren two days later, on July 8. In the late 1970s, most of Eritrean towns, including Nakfa, were finally in the hands of Eritrean freedom fighters and the towns of Segeneyti and Digsa were also freed on July 30, 1977. Liberating the town of Keren had strengthened the front and with the capture of artilleries and weaponry bolstered the front’s capacity. Thus, Keren was an important factor in the victory of the EPLF in liberating the towns afterwards….

From late 1977 onwards, many youth seeing the consecutive victories of the Front decided to join the armed struggle through the town of Keren by running away from the hands of the Derg regime. Zewdi, is an example among many. This is the story of a young woman during the time of the Derg regime…, she decided to join the armed struggle at the age of thirteen, without telling her parents nor her siblings, she just decided to join them. Yet, too young, with great eyes and curly hair, all she wanted was to join her older brothers and be part of the revolutionary movement. A young woman who had everything… growing up in Asmara from a well-established family… yet, she always knew that one thing was missing: the lack of peace, the fear of being killed by the Derg every time she would leave the house… the fear of never seeing her siblings, who had already joined the front, again … That was what pushed her to go.

Her older sister, Ghenet, who was a student at that time and active in Asmara heard that her young sister just left and was around the city of Keren. Her aunt and she, embarked on a trip to look for her. One morning, they took a bus… as soon as the bus left, the driver passed through the small towns near Asmara but right before heading towards the small town of Himbirti, there was a checkpoint controlled by the Ethiopian Derg regime… Everyone out of the bus… everyone was ordered to sit down quietly on the ground in the form of a queue, while the sun was hitting their heads and Ethiopian soldiers wandered around them.

Ghenet, with her bright glowing eyes and beautiful long hair, is then called by one of the soldiers, her aunt, discreetly followed her and kept repeating: “neza mer’at gualey intay delikhuma”, or “what do you want with my newly married daughter” in case the soldier would have some thoughts in taking Ghenet with them… Here she is, put aside and interrogated the whole day… thinking she might be a spy for the EPLF… She was frightened from the inside but showing so much confidence from the outside.

During that time, the town ofKeren and its environs were backin the hands of the EPLF, thus any movement towards this direction, especially of youth would be suspicious for the Ethiopian regime. Ghenet kept telling them that she was just going to her village in Himbirti … after long hours of interrogation, the soldiers decided to let all passengers go… everyone started running away from them… Guya! Running! Old and less old disappearing… Ghenet and her aunt would continue their journey towards Keren… with only one thing in mind: finding Zewdi.

Finally, Ghenet and her aunt approached Keren and again, they are stopped by another checkpoint… but this time, by Tegadelti, EPLF fighters… Again, long hours of interrogation to Ghenet ensuring that she was one of them… Finally, they embarked on another bus, an EPLF bus driven by a so-called …. The music is on, everyone singing and dancing in the bus under the hit revolutionary songs of the EPLF such as Weyno Weyno.

Finally, Ghenet could see a glimpse of Keren, reaching the liberated zone at last… Upon arrival, Ghenet and her aunt walked around the famous roundabout of the center of Keren…
a little silhouette wearing the beige uniform of Tegadelti with afro curly hair appeared in the middle of the crowd. It was Zewdi, the Asmarina teenager who is now an EPLF fighter… Ghenet, ran towards her and greeted her little sister, hugs, cries, hugs, cries… Zewdi looked different in her military outfit, her afro hair but holding the same beauty as her older sister. After long greetings, the siblings and aunt sat down to have tea in the Tegadelti’s compound. Zewdi wanted to stir the sugar in her tea but she could not find a spoon, as a habit, she took out a pen from her pocket and just used it as a tea spoon. Ghenet looked at her in surprise… thinking of what her younger sister had back in Asmara and now, she is already carrying the spirit of the fighters… jokes, talks, stories continues in the little shelter, and Zewdi, suddenly said: “sine sirat gerkum tezarebu, bebetera tezarebu” telling her elders to talk one by one and with discipline. All astonished, looked at her. The EPLF school has already taught her the importance of discipline, the little Asmara girl is now a grown up and conscious young woman who has learned the principles of the EPLF: discipline, consciousness, commitment, self reliance, camaraderie…. Ghenet, as a responsible older sister tried to convince Zewdi to return home with her, at least until she gets older. But, Ghenet realized how the little girl in her teens was already consciously strong and eager to follow what she  believed was the right decision, in other words, fight for the rights to self-determination and liberation of the people of Eritrea.

By that time, when Zewdi joined the EPLF in late 70s, women already had took important roles as equal to their male counterparts during the armed struggle, thus, challenging the
cultural doctrines of the patriarchal Eritrean society. Zewdi, then, went back to her compound with her other comrades and as the situation started to tilt in favor towards the enemy again with new attacks from Ethiopia and its new ally the Soviet, Ghenet and her aunt, quickly went back to Asmara.

The late 1970s showed a new shift in the struggle for independence since the first EPLF Congress of January 1977 in the Sahel and the adoption of a program for the creation of an independent, secular and independent state. Besides this, the program also focused on the liberalization of women’s rights, particularly in regards to the access to land and property, and an education policy in all language aiming at fighting illiteracy. Liberating the town of Keren, also coincides with the first congress and establishment of the National Association of Eritrean Youth and Students held in the symbolic city of Keren in 1978.