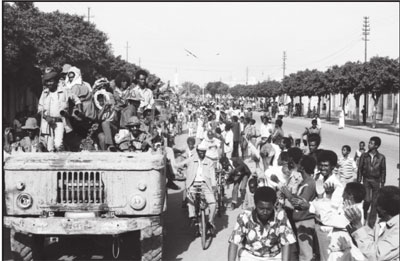 Eritrea is on the verge of turning 25. The Independence Torch is winding its way across the country, attracting large, boisterous crowds and building up anticipation, while small towns and cities are busy and eagerly preparing for the celebration. For decades, both during the long, bitter armed struggle and since the country’s unlikely independence, a broad array of analysts, commentators, and observers have inundated us with myopic, inaccurate, bleak, sensationalist, and politically-driven reports, analyses, and condemnations. Everybody predicted that Eritrea: would become (or is) a failed state; is too small or weak to be viable; is on the cusp of demise or implosion (e.g. “it’s going to blow”); is an isolated, hermit kingdom; and is a type of hell on earth.

However, in the face of these misplaced assessments and projections, Eritrea remains, and approaches 25. It crawls. It stumbles. It grasps. It misses it lives. It stands. But, it also rises, it progresses, it develops, and it moves forward.

Independence is much, much more than a quick stroke of a pen upon a formal declaratory document. It is not a simple wave of a flag, or a passionate rendition of a national anthem. It is not an event, but an ongoing, dynamic, fluid process, involving considerable twists and turns, ups and downs. It is taking firm command of one’s own presence and forging a self developed path towards the future. It is sitting upright at the table, alongside and rightfully with its foot on the floor, not subservient and supplicant, awaiting crumbs.

The following article presents a “crash course” on the “A, B, C’s” of Eritrea, detailing some basics about the country, both to clear up misconceptions and provide a small glimpse about the importance of 25th anniversary. This first edition features letters A through M.

A – is for Afabet. In March of 1988, Afabet was the scene of a monumental battle during the independence war, considered by eminent historian Basil Davidson as the most significant victory for any liberation movement since the Vietnamese victory at Dien Bien Phu. By the end of the three day battle, the Eritreans had killed or captured over 18,000 Ethiopian soldiers, and acquired a massive amount of arms and supplies from the enemy.

B – is for Badme. This small Eritrean town was one of the triggers for the destructive 19982000 war between Eritrea and Ethiopia. However, although the two countries signed internationally observed agreements to end the conflict, Ethiopia has failed to fully and unconditionally implement provisions of its final and binding agreement some fourteen years later. It continues to militarily occupy swathes of Eritrean territory(including Badme), in violation of its agreements and international law,while it has also engaged in repeated,aggressive military incursions into Eritrea. Unfortunately, the US,even as one of the witnesses and guarantors of the binding peace agreements, has failed to encourage its ally, Ethiopia, to abide by its legal obligations, thus tacitly Ethiopians flagrant contraventions of international law.

C – is for Cuba. From Guevara military campaign to avenge Lumumba in the Congo to the fall of apartheid in South Africa,nearly 300,000 Cubans fought alongside African revolutionaries.However, for Cuba, the Eritrean liberation struggle was complicated,and the Cubans sacrificed the Eritreans by instead supporting the Mengistu regime. Cuba trained the Ethiopian military, and sent thousands of troops to the Ogaden to combat Somali forces (who were also battling Ethiopian colonial domination). Consequently, Cuba“freed” Ethiopian troops to focus solely on Eritrea – thus working against the Eritrean revolutionaries.However, Cuba and Eritrea have strengthened ties since independence, particularly in the areas of health and education.

D – is for Dos. Dos as in “two.” Reviewing Africa’s many revolutionary and independence struggles, only two countries really “won” their independence from their colonial masters, Zimbabwe and Eritrea. Furthermore, of the two, only Eritrea gained its independence with an outright military victory on the battlefield (recall that Zimbabwe’s independence movement agreed to the “Lancaster Agreements”).

E – is for Economy. In recent years, Eritrea has produced considerable annual economic growth, often higher than the impressive average growth rate of the Sub-Saharan Africa region. Importantly, since economic growth does not necessarily equate to “development,” the country has promoted the former alongside, and not at the exclusion of, the latter.

F – is for France. France was where Eritreans made history during last year’s Tour de France, considered cycling’s most prestigious event and one of sport’s most grueling. Not only were Eritrea’s cyclists the first black Africans to participate in the legendary competition, Daniel Teklehaimanot also donned the Polka Dot jersey as “king of the mountains.”

G – is for Gold. Eritrea is endowed with abundant natural resources, especially gold. It has translated this into economic growth and tangible developmental outcomes. To be sure, resources are not the magical solution to the country’s development challenges and instead are only one variable within the country’s multifaceted, multi-sector national developmental strategy.

G is also for Gender. Around the world, it has long been the rule that women are inferior, with little ability to contribute substantively to society. However, from the days of the long
struggle and since independence, Eritrea’s resilient women have shattered such outdated, patriarchal rules and notions through their wholehearted participation, struggle, contributions, and sacrifice. Today, Eritrean women are active within all areas of society and they contribute in many diverse ways, ultimately playing a crucial role in the country’s socio-economic progress and overall development.

H – is for the Horn of Africa. One of the most difficult environments in the world, the politically-fractious region is a powder keg, and has suffered from decades of poverty, strife, foreign intervention, global superpower competition, famine, drought, ethno linguistic and religious conflict, external manipulations and machinations, and war. It is precisely within this challenging context that Eritrea must be understood. In poetic terms.

I – is for Isolationist. Eritrea’s championing of the principle self-reliance is often mistaken for isolationism. Self-reliance involves depending on one’s own resources and efforts to develop, strengthen, and grow, so as to integrate and engage with others cooperatively, not subordinately.

Peaceful and cooperative regional and international co-existence and integration have long been bedrocks of Eritrean foreign policy. However, at the same time, the country has been the target of an externally-driven strategy to isolate it, particularly through attempts at scuppering foreign agreements and economic deals. For example, according to a

Moving forward, as Eritrea works toward improving the lives of its people, developing and fostering regional and global relations should remain a key feature of policy. However, the process is a two-way street; Ms. Bronwyn Bruton, Deputy Director of the Africa Center at the Atlantic Council, has noted the failure of isolationist policies towards Eritrea and suggested that it is “time for a new approach” by the international community. Ultimately, greater integration, cooperation, and dialogue will not only support vital socio-economic
growth and general development, but also encourage peace and stability in a long troubled region.

I – is also for Invaders. Eritrea has an extremely complex history, dominated by the fight against invaders. Since the sixteenth century, the country has been occupied in turn by Ottoman Turks, Egyptians, Italians (from 1886 until 1941), the British (who defeated Italian forces in Eritrea during the second World War) until 1952, and the Ethiopians until 1991 (Pateman 1990: 5-6).

J – is for June. While Independence Day falls in May, it is impossible without June, the month of martyrs. Locally, June 20th is Martyrs Day, a day reserved to honor and remember the sacrifices of the fallen.

K – is for Kneel. Eritreans never kneel down.  This can be correlated with one anecdote. During the long, bitter independence struggle, the fighters acquired Kalashnikovs (often commandeered from the enemy), and modified the weapon so that it was lighter and easier to control.

L – is for Labour and Legal Protections, particularly for women. In Eritrea, National Labour and Land Reform Proclamations secure legal protection for women in employment, guarantee women equal opportunities and  maternal protection benefits, and ensure that women are able to purchase, use, or inherit land without discrimination. Additionally, several national initiatives, such as the Macro Policy, the Interim Poverty Reduction Strategy Program, the National Saving and Loan Program, the National Gender Action Plan, and NUEW’s micro-credit programs were created to guarantee that women would be adequately supported with the requisite resources and vital technical training that would help them fulfill their potential.

M – is for the Millennium Development Goals. Eritrea’s record on the recently completed UN MDG’s was amongst the best in the world. The country made commendable progress within social, health, and education sectors, achieving several of the United Nations’ Millennium Development Goals (MDGs). Notably, a number of regional and international organizations, including the African Development Bank (AfDB), the African Leaders Malaria Alliance (ALMA), the United Nations Development Programme (UNDP), and the World Health Organization (WHO) have noted that since Eritrea’s independence, life expectancy has increased, school enrolment and educational achievements have risen greatly,  maternal, infant and child mortality rates have reduced dramatically, immunization coverage has skyrocketed, malaria mortality and morbidity have plummeted, HIV prevalence has
decreased considerably, and access to potable water and sanitation have significantly increased (Pose and Samuels 2011; UN 2015; WHO 2014).