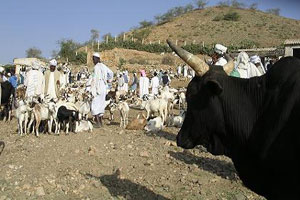 Occasions force everyone to spend for themselves and their families.  With the least you have, you need to celebrate the day in a good mood and manner, so as to respect the culture and embrace a sense of self contentment. Traditionally fiestas are times where parents purchase clothes to the kids and some other necessary stuff for them, for the occasion and the house if thought must. For that to take place, they find themselves running into what we all know, the Market.

Markets since humans start dwelling the planet, were places of people’s interaction for transactions and sharing ideas. Markets in different countries have different settings and ways of interaction between buyers and sellers. These places had never been easy, particularly for consumers as the variety of suppliers and products come up to be causes of headache for them. The major talking point when visiting markets is “the price”. Prices in markets sometimes are a bit weird, where it literally leaves suppliers or sellers to exercise freedom of doing business in some of their products for sale.

So many things in market places catch the eye of the consumer, apart from the goods that are ready to be sold. As far as people gather in vast amount its likely to even witness theft, where in our country victims shout “lieba… lieba” a native word for a “thief”, for people to help them catch the thief. That is not however our point this time. It is the price and the mutual conversations among partakers of the market parallel to it. I tell you how the common livestock market setting in our country looks in short.

If you are a well experienced client of the ‘Edaga’ (a word for market), then you can purchase the sheep or goat with a reasonable price that you got in mind when you leave your house. Otherwise, a stranger would be easily fooled and cash out a lot of money for an average sheep or goat. I have noticed plenty of things since in my younger ages. There in Edaga a customer is renamed and is called as ‘Uncle’ or ‘My cousin’, by the sellers. Every seller grabs you by hand to make transaction with him. If you are visiting the place for the first time you would turn and give glance to make sure if it is your nephew or niece. That I guess is a common way of the seller’s strategy to attract and hold buyers. They greet you as if they know you for decades. In some, it is genuine, that shows the Eritrean culture is welcoming enough but in some you just simply know it is faked.

Once my uncle was negotiating to buy a sheep for Eid and finds out that the seller repetitively telling him ‘Aysherefetn…. Aysherefetn’, approximately denoting the sheep is still young and indirectly telling my uncle, what he quotes as price is “fair”. My uncle was annoyed by him and told him to stop showing him the teeth of the sheep as he is not taking it to smile for him. Because what is sometimes quoted as price, without overstatement would make the sheep or goat stand in pride of itself, if it could possibly hear it. You just simply wonder whether the price is for one sheep or the herd of sheep.

Negotiating to have a goat or sheep in the Edaga with the sellers at times makes you look part of the atmosphere; no soon you will be finding yourself covered with the dust and the smell of dunks of livestock, if it is a must for you to get one for the day.  Dissimilar to that one may unfortunately buy a bunch of conversations and words free of charge and get back home with the money not less a penny.

People of the third world countries speak not their own languages for a definite reason of colonization, migration from here to there and other influences. Many African nations and other world countries use colonizers languages as their native. On top of that, it is normal to combine common words in formal conversations that are in the first place brought and inherited from the different regimes in past. Eritrea despite being colonized has its own language where its people talk, appreciate and comprehend one another. It is not to mean the citizens are emphatically perfect in their own and do not practice other means of languages but they do respect theirs.  That makes Eritrea exceptional, as it uses its own languages apart from other same colonized nations.

Words such as ‘Aftahala’ cost less than a penny in the market and you get it from all sellers as far as you are not in the line of the prices they tell. It is familiar to use this word “Aftahala” in these situations, especially in the livestock market.

Majority sellers of the livestock, especially of goats and sheep are people of the lowlands. That leads to a conclusion these people’s mode of conversation is very much influenced by the Arabic and Tigre tongues. Back to the word “Aftahala”, it is a final word expressed in the livestock market between a seller and buyer that binds the transaction is not happening at the time of negotiations. To my understanding it is a combined Arabic word (Aftah- La’e) the seller utters when not agreed with the buyers quoting the desired price, and that means he prefers the buyer saying, “ I am not buying the goat or sheep”, to stating the quoted price. They get upset when you tell a price that seems reasonable for you and nag at you until they get what they want.

Genuinely speaking, livestock price quoted by sellers in the market has been a value of luxury.  At times of festivities, it is usual to expect and see prices rising, to even seven, eight thousand per sheep and if you don’t agree as a buyer, they say “Aftahala”. What! That is what I always say; I am the one who should be using that word (Aftahala) when they first tell the price, because they never cease to amaze me with their confident calls. You just hesitate to slaughter the animal or not paying that amount never feels right to just eat it but to put it somewhere high and look at it always and say, “that is worth of grants”. Honestly it is an area where legal theft is commercialized sometimes. They try to get profits of 100 to 200% from the buyer, at the end of the day that is what you discover when they sell you much less than they have been quoting. Meat is not a highly consumed commodity in the society except in occasions, and the supply is not that much short to make a call of such prices. That optimistically made you wonder and likely understand why I chose the topic license to print money.

It is an expression to indicate an official authorized activity which enables people to make a lot of money without much effort. And it is meticulously a license to print money, as it is not tempting to raise and sell lambs and we used to see prices rising for long time unlike the current period, where the market is finely tuned and getting restructured. Business is business at the end of the day yet it does not have to be in the expense of others. But still the expression “Aftahala” is persisting with its past tones and God willing it will cease to exist to bring buyers and sellers reach in reasonable figures that satisfies both for all times.  May God exalt our markets and happy holiday!