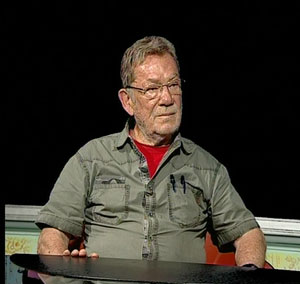 Q&A will be talking today with one of Eritrea’s long-time friend: Mr. Fulvio Grimaldi, an independent journalist from Italy. He has known Eritrea over four decades ago; when the Eritrean voice was being denied of an audience, he talked about the Eritrean struggle for independence in the western media through documentaries he made, photo exhibitions he arranged and columns he wrote in newspapers and magazines.

He was here in Eritrea in the past weeks working on a new documentary regarding the Eritrean post-independence journey of development and resilience.

I am an Italian independent journalist and I produce documentary films of various kinds. I always try to be as independent as I can. I worked with Italian State television RAI and resigned some years ago. I make documentaries mostly as a correspondent or on areas of tension; in areas of which I think there is no correct and not truthful information. I try to make a little bit of an alternative information, this is the concept on which I base my journalism. And the same perception brought me to Eritrea a long time ago.

My colleagues and I came to Eritrea in May, 1971. We heard there was liberation war going on in the Horn of Africa: Eritrea against the Ethiopian occupation, and it was very little known of… we felt like that it was a great example of anti-colonialism struggle of the Global South, and especially Africa, we felt the need to visit the revolutionary fighters in person and explore its essence. We traveled to Sudan first and went to the HQ of the liberation front office in Sudan, then we were allowed to enter Eritrea with a group of, I remember well, extremely nice and friendly freedom fighters. We started our journey from Kessala, went through Tesseney all the way through Gash Barka on to Barentu, Akordat and near Keren; this was a very long stretch to do on foot with one camel carrying our luggages. It was a beautiful experience, I appreciated coming across the Eritrean people and the Eritrean freedom fighters, and they informed us all about Eritrea from the Eritrean perspective. Since this country had been under the Italian colonization before, we felt a particular responsibility to support the people’s cause in the struggle for freedom; because we had denied its freedom in the past since late 19th century and so, we Italian citizens of today, felt giving a hand by telling the world the truth about Eritrea and its struggles.

It is obvious that the journey was dangerous but we were very well  protected by our freedom fighter friends. They knew how to move around the country, they knew were the Ethiopians were, they knew well about the enemy lines, they knew where the enemy’s strong and weak holds were, they knew everything, they had a great net of communication and information gathering system, so they looked after us with ease and we were always safe. So we moved all the way from the border with Sudan to Keren and beyond. We came across areas bombed before we passed through, but it did not affect us. But going back, I would say we’d have had a more dangerous experience a few years later. When I came back to Eritrea in 1977, we crossed with some refugees from Yemen to Danakil, and landed in a village called ‘Bara-Sole’. As soon as we arrived there, as if the Ethiopian army knew of foreign journalists arriving, they bombarded the village. They completely destroyed it, but we got away together with the remaining population of the bombarded village, we took refuge in some caves above the burnt village; people died, cattle were killed… This gave as an impression of the ferociousness of the Ethiopian regime, killing civilians in order to hit an intended target, I know that Bara-Sole was reconstructed since then.

I know for a fact, because I lived through this period, that there were many liberation fronts around the world that had contradictions within. Because you know, they had different ideologies, origins and backgrounds and so on, we did see liberation fronts segregated. However here, it was truly ‘a people’s liberation front’. The whole population was involved and it lasted 30 years, which is as far as I know the longest anticolonial struggle throughout the whole anti-colonialism period! I think Eritrean people were and still are owners of immense patience. Today you talk of ‘resilience’ as one of your main principles, and it gets me thinking that you got it out of your experiences, it is a proof of a nation that could be resilient for 30 years and carry on till the targeted victory. You achieved it. And we are all happy about that.

I think what the west did to Eritrea was a black stain in the history of civilization. Eritrea was left by Italy a former colonizer, it was abandoned and antagonized by the western powers who supported first the rule of Ethiopia’s Hailesilasie in his repression to destroy Eritrea. Then was further suppressed by the other side of the world, the Soviet Union, who supported the Mengistu regime, which overthrew the emperor, with the very same purpose of not allowing Eritrea’s freedom and supress its people. It was really an unbelievable hard task for the Eritrean people. Every strong power was against you, and the ones with no or little power were indifferent, so you did it all by yourself. With very, very little help, perhaps some sympathy in public opinion. Every time I returned to Europe, after my visits, here I did exhibits of photographs and recordings from my trips, I wrote articles of you in magazines and newspapers of all kinds of ideological opinion and they really did gain a lot of public attention and sympathy. But only public opinion, not governments or world powers. I congratulate you for your independence, always.

Well it was a great, great day; a time of Joy. Having being so close with the freedom fighters, sharing with them hunger, thirst and physical difficulties, and having their support, their acceptance. The village and villagers, women and children, peasants and just everyone they would assist us in every way; giving us food and water, they would willingly sacrifice a gazzelo or a capretto for us and the freedom fighters so we could eat. These generous people that would just always be happy to welcome guests, and even when they knew that we were Italians and Italians did suppress them at a moment of time, they are forgiving, they do not hold a grudge! So for me to learn that these people, this nation achieved its independence with its own means was really a sign of hope for humanity. The Eritrean Victory is victory for humankind; a teaching that the greatest odds can be overcame with generosity and good will. One triumph it is not only for one self but for humankind at whole, and as I am a member of humanity, it was my victory too. This is how I remember May 1991.

Now that we are here, we are very happy. We saw some sort of conformation of what I saw during my first visits. You suffer under unjust sanctions but there is notable development, your country is developing well and at a promising pace. You keep being under aggression, directly or not, from your neighbor who threatens you all the time and is still keeping part of your sovereign land adding to and many more difficulties with the outside world but you still carry on. I have seen enormous development in your agricultural endeavors, which is leading you to what you’ve always wanted ‘self-sufficiency’. I have seen integrated farms and young people working enthusiastically, I have seen you are doing great in mining and other industrial fields, easy and free access to health facilities for your people and same goes in the sector of education. Eritrea is a beautiful country, whose beauty is known by everyone, still striving for sovereignty and development through resilience for self sufficiency  and equal sustainable progress in all aspects.

I am accompanied by my wife who is also a producer, and we have been traveling around the country to assess on the development the country is registering from the beginning to now. We went to the Southern part, Mendefera and beyond, and we went to the border area with Ethiopia. We climbed a mountain and we could see where the latest battles took place  and involved your youth. We could see all the incredible scenery, the war of 2000 the one in which Ethiopians tried to move up to Asmara and were blocked in a three day nonstop war.… It has been a very emotional journey for me, as was during my first encounter with the Eritrean revolution.

What   frustrates an honest journalist is not  being able to tell what is really happening. The fact that the general reporting of Eritrea is either limited, inadequate, insufficient or it is utterly biased, makes me uneasy. The western mainstream media has got it wrong about Eritrea, most of the journalists that speak or write about Eritrea have never been here.
They just echo what they know is suitable for the great powers of the world. Wrong information of cruelty, demonization… this is just frustrating, intolerable. This kind of journalism is affecting your country, yes, as well as many small nations and people who do not choose to surrender. What we are doing at the moment with involved friends and colleagues is trying our best to break this wall that has been made to segregate small developing nations from the rest of the world.

A people with the purest incessant smile. It is like when you smile, there is something bright.

My message to my Eritrean friends is a massage of thankfulness for your contribution in human freedom, justice and international rights. I wish your 25th anniversary to be a prelude for your 50th, for your 100th and many more… for an Eritrea that grows strong and always rightful in the quest of humanity.