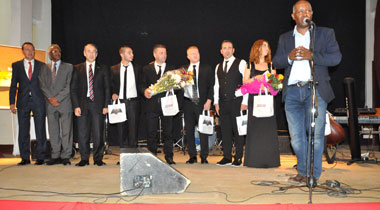 Here is something to talk about besides the rainy weather and the cloudy skies of Asmara. I was walking downtown the other day, I stopped by a place where I usually take quality time with myself. As I entered, I came to notice a poster of the Turkish cultural days to be held here in the city of Asmara honouring the upcoming 25th independence anniversary and the subsequent festivities held for this important occasion.

The band, the Izmir Metropolitan Municipality, which came from Izmir, Turkey, performed a pop jazz band show at Asmara Theatre on 2nd May, 2016. Luckily, I happen to be a big fan of Jazz music and became part of the audience, and simultaneously I saw a few of their movies reflecting their culture and tradition along with their sense of nationalism. Until May the 5th, these shows were taking place separately at Cinema Roma. The event was hosted by the Commission of Culture and Sport of Eritrea and sponsored by Turkish airlines and the Embassy of the Republic of Turkey in Eritrea.

Ambassador Zemede Tekle, Commissioner of Culture and Sport on his speech stressed that the arrival of this musical group on this very special occasion shows the growing relations between the two countries. The event previously included painting activates for children of different age. Around 558 children from 32 different schools partook in that particular event and their artwork under the theme ‘Children and Nature’ were displayed in cinema Asmara during the concert, thus, demonstrating the Eritrean culture through the eyes of its youth, 25 of the best artists had been granted with awards and certificates in encouragement.

As I was waiting for the show to start, the crowed didn’t take long to gather. Soon the cinema was full of artists of all fields of art, government officials, and members of the Turkish Embassy, admirers and foreigners from countries such as China, Italy, the Sudan, and Egypt. The show began with the Eritrean and Turkish national anthems orchestrated by the Turkish band. The Turkish ambassador to the state Eritrea his Excellency Firat Sunel gave an opening speech to the audience. In his speech, His Excellency said that Turkey was one of the first countries to recognize Eritrea as a sovereign state.

Turkey had celebrated its 100th anniversary last year. In honouring our quarter of a century celebration, Ambassador Firat Sunel along with the bands led the singer singing the Turkish independence song named “EZMIRMARCH” / “The song”. Together they also showed their cultural dance along with the music played by the band. As glamorous as the night was, the band played a few Eritrean melodies like once sang by Barnabas called “Selam Selam Eritra”.

After the show I had the chance to meet the band and listen to their impression on Eritrea, then I met with Ozge Bilge the third secretary of the Turkish Embassy, the person who

translated my dialog to the band. As this trip to Africa and especially Eritrea was their first time ever, they were overwhelmed by the hospitality and warm welcome. They came to encounter how friendly the Eritreans were to them; they described the ‘stranger feeling’ had faded away when they arrived on Eritrean soil, at the Asmara international airport.
Time was not enough for them due to the schedules they had at the cinema Roma for the movie premiere show. As musicians, they stressed that music to them is like their heart beat and as the air they breathe. So I asked them if they have any plans to collaborate with Eritrean singers in the future or come back again. They definitely agreed, if we are willing to invite them again. The band departed back to their home, Izmir, the next day on Tuesday the 3rd of May, 2016.

Yet that was not all, I headed to the cinema Roma that very evening to watch the Turkish movie premier subtitled in English called “Benim Dunyam”, “My World”. It was all about a little girl, who became sightless and ill-impaired due to an illness she had at the age of two in the 1950s, on an island at the province of Istanbul known as ‘Buyurkada.

On Tuesday May 3rd, 2016 the second premier of the movie “Ask Tesadfufleri Sever”, “Love likes Coincidences”, which was about a love story whose lovers’ path starting from their birth through their childhood and adolescence crossed the Turkish capital ‘Ankara’. Subsequently, on Wednesday the 4th of May, their third movie was called ‘Mommo’ “The Bogeyman”, a story of two children, describing a village, its people and the relationship between siblings with a plain language. And with a surprise end to become a journey of tears and smiles, happy moments tear jerkers of ups and downs of life in a single film.

Finally on Thursday the 5th of May, they finalized their show with the fourth and last premier at cinema Roma. The movie called “Uzak Ihtimal”, “Wrong Rosary”, about a man named Musa, who was appointed to Istanbul and settled in small mosque there. He settled in an apartment used as lodging for the mosque’s prayer caller, who is unaware of what might change in his life as he meets a catholic nurse Clara who happened to live across from his apartment.

The Turkish cultural days had brought a great deal of interest on Eritreans since a lot of us are spectators of the series of films about their culture, tradition, artistic views, history and nationalism. Indeed, celebration glows brighter when shared. They opened a gate for others to come to Eritrea and share their culture. They all wished Eritrea a happy 25th independence anniversary to be celebrated under the theme “Quarter Century of Resilience and Development”.

Familiarizing with other people’s culture and views adds to the way we view ours and create a respectful mutual relationship among different societies, ensuring national harmony and unshakeable relationships with various countries whether they are neighbours or across the ocean.