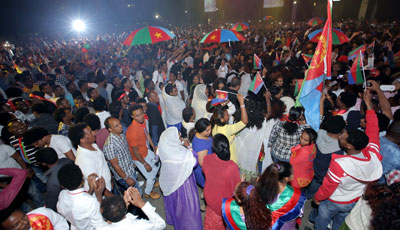 Eritrean nationals residing in Israel celebrated the Silver Jubilee Independence Day in a patriotic manner on 06 May.

Asmara, 12 May 2016- Eritrean nationals residing in Israel celebrated the Silver Jubilee Independence Day in a patriotic manner on 06 May. The celebration was highlighted with cultural shows and songs by the cultural troupe from Eritrea and other programs depicting the factual profile of their country.

The celebration which was held in Tel Aviv was attended by more than 6,500 Eritreans as well as Israeli government officials, diplomats and friends of Eritrea.

At the occasion, the Eritrean Ambassador to Israel, Mr. Tesfamariam Tekeste said that Eritreans residing in different parts of the world are celebrating their Independence Day in a patriotic zeal and that attests the to the strong attachment they have with their country.

should be transferred to posterity.

It is to be recalled that the Eritrean nationals residing in Israel celebrated the 24th Independence Day anniversary in a similar manner.

Likewise, Eritreans residing in Abu Dhabi, United Arab Emirates, expressed readiness to back up the national development programs. They articulated their conviction at a meeting they conducted on 06 May.

The Eritrean Ambassador to the UAE, Mr. Osman Mohammed-Omar gave extensive briefings on the current situation in the Homeland and on the preparations made to enthusiastically celebrate the Silver Jubilee Independence Day.

In other news, the Eritrean Ambassador to the South Sudan, Mr. Yohannes Teklemicael held talks with the Minister of Foreign Affairs of the transitional government, Mr. Deng Alor Kuol. Their discussion was focused on bilateral issues and on strengthening the diplomatic relations of the two countries.

The Foreign Minister said that the South Sudan government appreciates the role that the Eritrean Government is playing to ensure the peace and stability of his country.