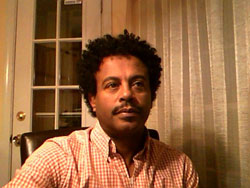 Today’s Q&A guest is a man of elite predispositions of musical artistry; Barnabas Mebrahtu, one of the world class musicians that specializes in classic music. He has been working on three projects to be presented during celebrations of the Eritrean Independence Silver Jubilee Anniversary. And he also told me of the after party for independence, see for yourself.

On my part what we are trying to do is to present concerts. The first one which has been already staged a couple of days ago, was a classic concert. Together with a group of young children and adolescents, we presented a piano concert on the 10th of May at Cinema Asmara, the average age of these amazingly talented young musicians was of 11 years to 20. Definitely an experience that gave me confidence in the talent of the young classic musicians.

Because in our country there is little knowledge of European classic music, several organizations and institutions have been working in setting a path of introduction and consecutively of progress for classic arts. So, annually we conduct concerts of such nature, and I keep noticing that we are, little by little, gaining the interest of the public by the year. This year from the others we had a reception that amazed me even; in my experience I have never seen a dazed reception of local audience that lasted throughout the whole –long– concert ever before.

Previously, many times we did raise the idea of doing concertos and opera works, but I would hesitate a lot because I respect classic music and so I fear of maybe not being able to execute it as it should be. But this time it was much different, so I was deeply touched, motivated to do more of classic music and was also extremely delighted for the young musicians being received for their artistic quality.

Yes, for the second project we are working on a musical drama in Hidareb, with 30 artists involved on its production. It has a beautiful story line narrating a true story of some 180 years ago, a story of a young man seeking revenge for his destroyed village by invaders. It will be a totally live presentation, we will play the music on full instruments. We are trying to bring the Hidareb traditional and use an upbeat mixture with non-traditional instruments while striving to create panache elegance. But of course we are keeping intact the beauty of the Hidareb culture; we are not modifying anything, I don’t want to be misunderstood, we actually want to show its purity.

Hidareb culture has musical richness; all of our ethnic groups have similarity in musical composition as they are of pentatonic scale, however Hidareb musical culture’s nature is of 5/4th which is mostly and commonly used in jazz. Moreover, Hidareb tradition highly emulates the sublimity of nature, for example many of their dances are imitations of animals and their moves… it is so beautiful.

Fully. I am the director and we are set in keyboard, guitars, flute, violin and what more you name it. It is going to be exciting. The laziness that our musicians built up while depending so much on technological advancements and studio recording short cuts has deeply wounded them even in matters of discipline and virtues any artist should hold dearly to. It was a rather existing job because many of our musicians are used to all these shortcuts, but we have made through and here we are. I don’t want to cheat the audience, I hope these experiences will benefit the musicians too. And I hope for us to eventually develop the art of appreciation to live pleasing melodic performances.

The initiative for this one was raised in October of last year and then got extended to May for the celebration of the Silver Jubilee. Eritrean Classics are of ample magnitude, our classic song and musical productions are of a bulk liveliness and what we are trying to do is technically portray this aspect of our classics. We prepared for four full months to compose and arrange the classics and enhance them with modern modus operandi. We are teamed up in a group of 11 musicians and accompanied by suitable vocalists.

Oh yes, thank you very much! I was born and raised here so I felt almost the same as everyone else: there was incessant yarning for freedom. So a fervent sense of patriotism, nationalism and anything more that has to do with our identity, youngsters wanted to join the freedom fighters and didn’t care much of all else.

I was studying in Finland and I hated having an Ethiopian passport. I was doing quite alright for myself as a student, in fact I got job offers before I even graduated, and honestly speaking I had my share of abundant success. So when newspapers and magazines interviewed me or wrote about me they would define me as ‘Ethiopian’ and I just trough tantrums. There were times in which I would end up arguing harshly, telling people that I am Eritrean and I would instruct them on our history and culture.

Here is my most cherished happy memory: my graduation was scheduled for May, and you know how it is, parties and marry makings for students before graduations, so on the eve of our independence I was out with my friends and got home at 5 am and turned TV. And then I got the news of free Eritrea, my country being finally independent, liberated was just… I don’t know how to explain! I invited my friends for an after party to celebrate the independence of Eritrea. I could finally make sense and sound sane, without a doubting listener, whenever I’d insist that I am Eritrean at all places and times.

I was here in 1992 and returned home for good in 1997. I always have had and I still have the dream of founding what I know best in the place I belong to. Just like in bands of music we create harmony when we fit in synchrony Eritrean people too is known best for marching unruffled simultaneously as one, my wish is for us to do so for eternity. Congratulations to all!

Eritrea: Horn of Africa, Red Sea and the Mandeb Strait