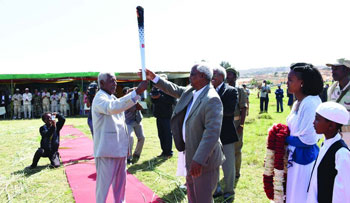 The Independence Torch that has been on a nationwide tour in connection with the Silver Jubilee Independence Day anniversary reached the Central Region on 9 May.

Asmara, 14 May 2016 :-The Independence Torch that has been on a nationwide tour in connection with the Silver Jubilee Independence Day anniversary reached the Central Region on 9 May. The handing over ceremony was conducted at Geshnashim, Serejeka sub-zone, in the presence of government and PFDJ officials, Army commanders, inhabitants of the surrounding villages, students and EDF members. The Governor of Anseba Region, Mr. Ali Mahmud handed over the torch to his counterpart, Maj. Gen. Romodan Osman Aweliai.

The Central Region Governor said that the Independence Torch has been accorded enthusiastic welcome in all the administrative regions and that it would be accorded similar welcome in its tour of the Central region. The Torch that began its tour on 15 January from Nakfa passed through five regions covering about 2,900 km.

The first week’s tour in the Central Region was from Serjeka to Zagir and Azen-Kuazien during which it was accorded enthusiastic welcome by the residents of the different areas, students and EDF members in all the areas it passed through.

The next destination of the Torch will cover Embaderho, Beleza and then to Berik sub-zone. It will reach Asmara city on the 24th of May from Adi-Hawsha.

Huge investment being made on communications sector