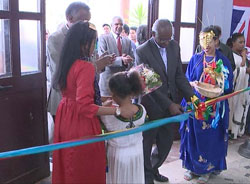 The exhibition organized in connection with the Silver Jubilee Independence Day was officially opened today, 17 May, at the Expo compound in Asmara.

Asmara, 17 May 2016- The exhibition organized in connection with the Silver Jubilee Independence Day was officially opened today, 17 May, at the Expo compound in Asmara.

The exhibition also includes sand table organized by the Agitation and Information of the Ministry of Defense. The sand table includes the military positions of the EPLF and the enemy during the final offensive at the Dekemhare front.

The objective of the exhibition is to transfer the miracles conducted during the armed struggle for independence and for the safeguarding the sovereignty of the country to the young generation.

Likewise, the silver Jubilee Independence Day celebrations have began in the port city of Assab in the presence of the work manager of the region, Ambassador Mohammed-Seid Mantai and the Chief of staff of the Eastern Command, Brig. Gen. Abraham Andom.