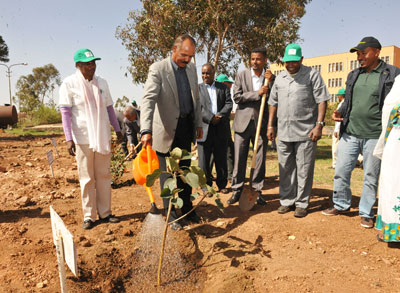 From a bird’s eye view, anyone would probably tell the Hager Media Hall at the Ministry of Information has been replaced into an irrigated land. The camera man of the day might not have taken shot from the top, but you would imagine how awesome the day will be by just looking at the spread of the color green at the hall, thanks to the 325 attendants uniformly wearing the same green hat to celebrate and strengthen the avenue they have been going for the last ten years.

May the 15th, National Greening Day campaign, has been tremendously celebrated in the country. More of the other years, the campaign celebrated its 10th year anniversary in a more organized and efficient way focusing on assessment and way forward. The mass of attendants participated showing a real care and enthusiasm in honor of the event. The President of the State of Eritrea, Ministers, High officials, Commanders-in-Chief, religious leaders, guests of honor, diplomats, governmental and non-governmental institutions, farmer’s community and stakeholders of the program were among the major partakers of the outstanding and inspiring green day.

The event opened its ceremony with the adorable Wari cultural troupe’s songs and dramas who entertained the audience throughout the day. When the guests of honor had taken their reserved seats, a minute of silence in remembrance of our martyrs was conducted. The next episode after the first entertainment of the Wari entertainment group was the introductory speech of Mr. Fitsum Hagos, chairman of the greening campaign committee. Mr. Fitsum Hagos conveyed that the uniqueness of this year’s campaign was not just only being the tenth year anniversary but since it happened on great days of celebrating the Silver Jubilee Anniversary of the Independence Day.

To make that particular program realistic, members were selected from the Ministry of Agriculture (MOA), Center of Map and Information of the Office of the President, and Ministry of information (MOI) in the establishment of a committee and collaborated for more than a year. The chairman remarks and believes that the ultimate success the campaign has ever won in the last 10 years is the society’s awareness towards afforestation and related programs and activities. And with the government’s initiative to the campaign, it would be of huge importance in assistance and providing a positive influence and outcome subsequently.

According to the event record sheet, in the last ten years around 40 million seedlings were planted in a 15 thousand hectare of land. Since 2006 around 300 thousand hectares of land made to be enclosed (temporary and permanent) by the greening campaign.

Parallel to that, Mr. Fnan Tekle, the representative of the MOI told the event prepared 50 holes for honored guests to plant in the compound of the ministry in collaboration with MOA experts.

The truth is that, the status of the nation’s trees and wildlife has been dramatically devastating over the last centuries. The reason behind was the periodical colonization, draught and climate changes. Ever since the Independence Day, the government took part in replenishing the land to its former beauty. It started to exercise activities in preserving soil and water, afforesting and reforesting by the overall society and military force. However, the goals set were big as well as the challenges, so an organized and well executed team had to be formed. That was the time for the birth of the ‘Vigorous Effort to Greening Campaign’ which was exactly ten years back on May 15th, 2006. A communal based campaign with only one green club at that time and now reaching the number of 482 green clubs.

The campaign’s objective is to regain the number of trees that has been deteriorating from time to time. At the moment, the president, in his statement, stressed that every activity done has to be measured in time, in quantity and consistency. As a backbone to the campaign, the authority of trees and wildlife has made its presence in 2008 with the aim to control deforestation and wildlife extinction.

On the last Sunday’s greening day, the president stressed that the programs of afforestation must not fail to have a strong monitoring and protecting party with a firm research infrastructure, otherwise, he warned, all efforts will only be confined into words. Mr President addressed that concerned party should evaluate the lessons learned and experience from the past failures and hope to jump a double step in the future path of the program.

Eritrea being one of the nation’s chosen to win over the 2030 campaign of “making the landless poor”. Prior high officials and guests of honor made their way to plant their seedlings into their respective holes, the summary presentation of the green campaign was made by Mr. Mussie Robiel. Extensive information of the soil and water conservation,afforestation, deforestation (along with the court issues to liable parties) and green clubs, enclosures, opportunities and challenges the campaign had faced were included in the presentation.

The summary of the authority in preserving trees and wildlife given by Lt.Col. Ghebregiorghis Syum, was followed by all six regions’ agents presentation of their respective ten year’s evaluation, starting from the regional map, to soil and water conservation, the afforestation program on native and abroad seedlings, green clubs formation, enclosures to trees and animals (including wildlife status), deforestation (natural and human), introduction and development of the smokeless stove called adhanet, opportunities and challenges and each upcoming plans on the program. Relevant information about adhanet shows that an approximate 143 thousand families are now able to use it throughout the country, as this stove is efficient enough to lower the energy consumption we consume on a daily basis by 50% and, thus, plays a vital role in deforestation. Nonetheless, the authorities explained that only 33% of households using this stove and notified a harder work still waits.

After an hour and half of lunch time, the attendants got back to continue following up the remaining green day programs. The afternoon times proceeded by a documentary film showing the overall scenario of trees in the past and the progress achieved so far. It recalls the 30% coverage of forests in the country in good times nevertheless turns to be demolishing to 1% due to various reasons. It highly condemns the interference of human hand engaging for personal benefits thereby causing deforestation and animal extinction.

The 20 minutes-long documentary was an interesting film with a direct forward message targeting irresponsible individuals.

The final hours of the ceremony were meant to be to the successful individuals and institutions who have contributed hugely in the campaign’s journey. Motivational prizes are provided annually to model parties (individuals, villages, institutions, religious places, schools) by the ministry after a thorough evaluation of activities. A certificate of approval, up to 1200 farming accessories, 150 solar panels, 23 quintals of artificial fertilizer, and 500 quintals of selected seedlings are offered to winners in this year’s prize of the green campaign.

Above all the Duma Award is given to the region in which it has performed well in all areas of interest of the campaign. According to 2016, the Duma Award went to the Southern region where the Governor of the region, Mr. Efrem Ghebrekristos, had officially received the Award from Minister Arefaine Berhe. The Minister concluded the official ceremony stating the authority ought to focus on cost benefit analysis not just using lame words covering failures and outshine improvements. He further noted proper plans should be drafted and execution has to be made by all means to achieve the plans, while every activity to be executed must be made from the lower scale of village; the administration and supervisory mechanisms.

What made me stand before the gate when I arrived early in the morning and fascinated me more was the world’s slogan I read and later voiced out by Minister Arefaine before he gets off the stage, “this planet is borrowed from our children not acquired from our parents”, where he clearly explained, that everyone must be willing to plant a tree and return their debts to their offspring. Thereby forming the emblem of the green campaign in every single school remains an imminent task to secure a green revolution.