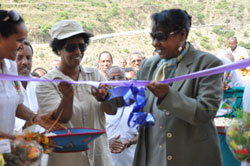 In Embatkla administrative area, Ghinda’e sub-zone,  a newly constructed  healthcare station was inaugurated on 17 may.

Massawa, 18 May 2016 – In Embatkla administrative area, Ghinda’e sub-zone,  a newly constructed  healthcare station was inaugurated on 17 may. The healthcare station is expected to make due contribution  in the provision of a broader and improved service.

Constructed at an expense of Nakfa 6 million, the healthcare station that has 14 treatment classes would provide prenatal care, vaccination, voluntary counseling and pharmaceutical services.

Present in the inauguration ceremony, Ms.  Amina Nurhussien  expressed that the construction of the new healthcare station is a continuation of  varied infrastructural activities that have been carried out since the wake of independence and thus the station would play significant role in easing the challenges of the inhabitants of Embatkala.

Stating  that all of the social service institutions in the region have been providing commendable service to beneficiaries, the administrator of Northern Red Sea Region Ms. Tsegereda Weldeghergish  on her part said that the healthcare service expected to be provided in this new station would be enhanced through the active contribution of the inhabitants.

According to reports from the region,  newly constructed healthcare station in Erafayle and a community hospital in Bada have already been ready to render service.