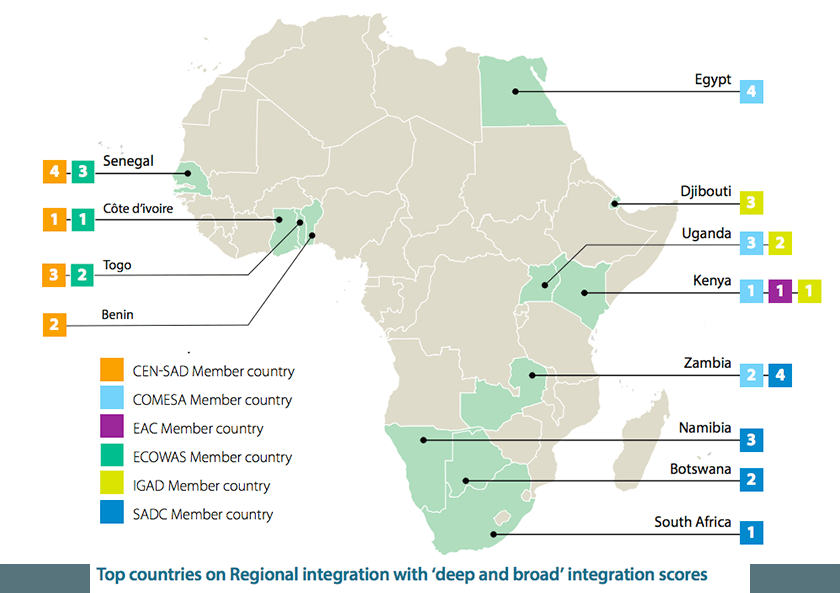 Last month, the inaugural edition of the Africa Regional Integration Index was released. The index, which is the “product of a strong collaboration on the part of the African Union Commission (AUC), the African Development Bank (AfDB) and the [UN’s] Economic Commission for Africa (ECA),” is made up of several broad dimensions of integration and cross-border interaction, such as regional infrastructure, trade integration, financial and macroeconomic integration, productive integration, and the free movement of people. Sixteen specific indicators, which cut across the five dimensions, are utilized to calculate the overall index.

Generally, data and trends about integration across Africa have been scarce and difficult to explore. Importantly, the Index will help to fill the gap by helping to increase awareness, knowledge, and understanding about regional integration and interaction in Africa. Moreover, the Index will help in identifying challenges, raising potential solutions, and encouraging greater policy reforms. Ultimately, the Index should play a positive role in promoting progress, development, and improved living standards for Africans.

Results for Eritrea, which is a member of three RECs – specifically, CEN-SAD, COMESA, and IGAD –reveal both room for improvement as well as signs for encouragement. For example, scores for productive as well as financial and macro economic integration suggest areas to address. The former is significant in terms of creating an economic base that is more resilient to shocks and also for building a more skilled labour force that adds value to goods and services. In regard to the latter, it can promote knowledge and technology transfer, greater innovation, and more trade.

As well, Eritrea was ranked as a “high performer” (with a score that was higher than the average of all countries) in terms of trade integration, comprised of measures such as the level of customs and duties, within the CEN-SAD REC. Importantly, trade can directly and positively impact people’s livelihoods or incomes and help significantly accelerate overall development.

Ultimately, integration can be an effective, efficient tool for development, and it may serve as a foundation of Africa’s future. The Africa Regional Integration Index measures where Africa stands on regional integration and reveals important gaps and weaknesses. For Eritrea, renewed commitment and expanded focus on trade, infrastructure, production, talent mobilityor capital, and integration can play a tangible role in overall competitiveness, growth, social transformation and overall development.