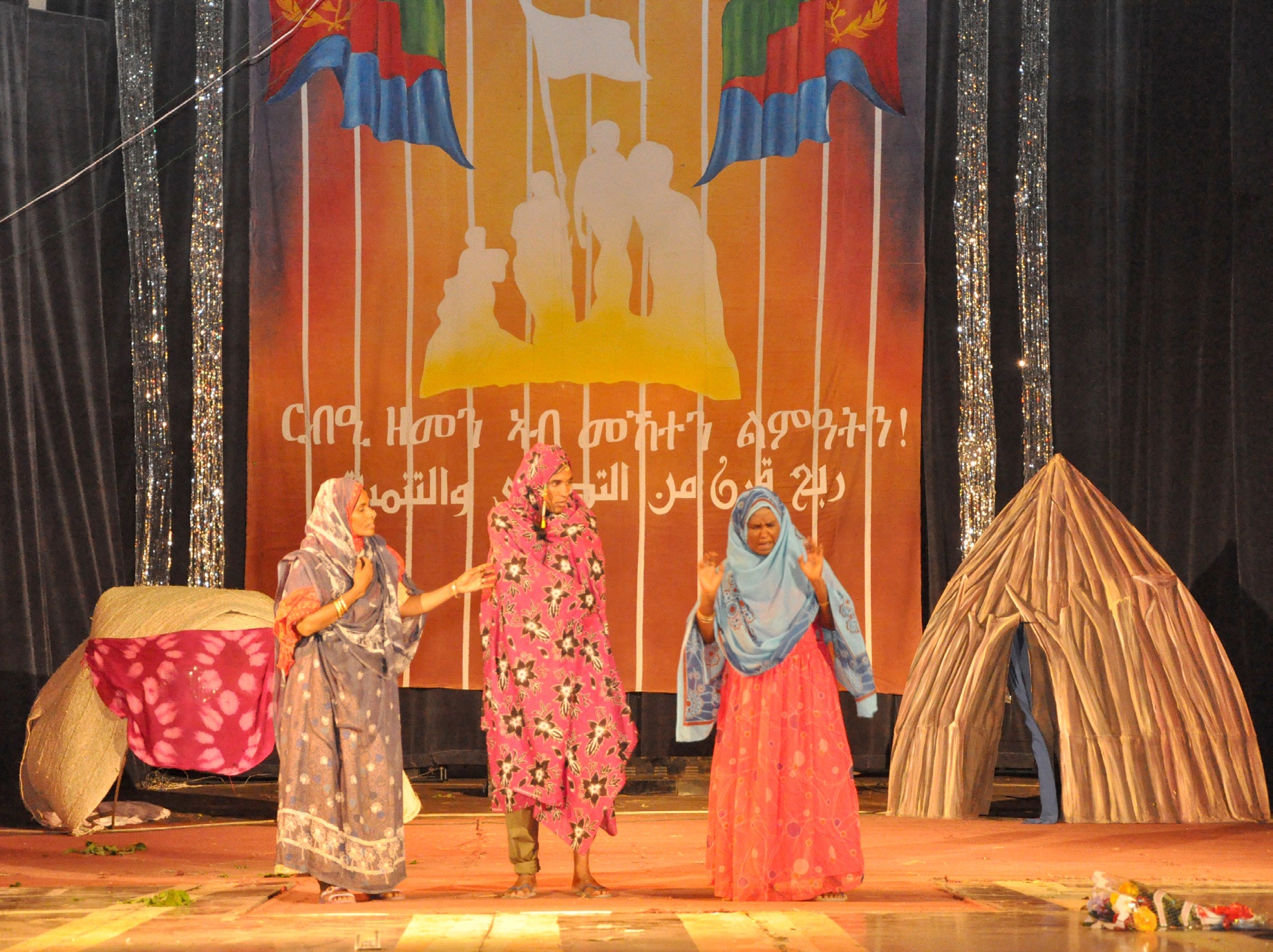 This year’s 25th Silver Jubilee Anniversary of Eritrea’s Independence is being celebrated in multiple ways. Some may think that the festivities are synonym of music performance and dance shows only. Actually, this year, the organizing committee has put the level high by multiplying and diversifying the type of events to meet each and every one’s tastes. Passing by sport events such as marathon, soccer tournament to the drama and theatre performances without failing to recall the series of movie screenings, art exhibitions and diaspora stands.

Everyone can find his taste during this month-long festivity. In today’s issue, I will focus on one thing which triggered all my attention: the number of movies and live theatrical performances organized. Indeed, this year, Eritreans and friends of Eritrea have the chance to watch number of well-produced movies as well as live drama, all free of charge at the premises of both Cinema Asmara and Cinema Roma. When I looked into the program, I could not even decide which one to attend and thanks to the TV broadcast, I was able to watch most of those I was interested in.

One of them, ‘Gedli bi Gedli’ or loosely translated ‘a struggle in a struggle’ is an amazing movie and production showing the tremendous route in joining the EPLF by citizens in the late 1970s. It is taken from a real story in which the movie also documented testimonies from those who took part in the long journey. Indeed, about one thousand of young women and men decided to join the front leaving the highlands towards the Sahel in EPLF controlled areas. The movie shows how the everyday struggle for their lives they had to face during the whole journey towards the final destination of reaching the front. At some point, youth were trapped in the middle of the bush in Filfil Selomuna, where it rained constantly for more than two weeks. They had to manage to build up shelter from their netsela (white traditional scarf) and some of the wood they will find. Cold, the lack of food forced many to just eat from the grass and some seeds.

During that time, especially those who grew up in urban settings had greater difficulty to adapt in such conditions of survival between hunger and unwelcoming weather, the journey was harder than they thought. In this movie, we see how the route was already a struggle on itself. Hence, when members of the EPLF came to them in the middle of Filfil Selomuna, they explained to them the perilous route awaiting on them and that those willing to continue to stand on one side and the others could go back.

Witnesses of this perilous journey are part of the documentary, such as Wedi Shawl who explained how he did not expect such a harsh journey even prior joining the front. From then, 800 decided to continue the route while another 200 returned. Walking… walking… for hours, without any break, going down the hill, up again… ensuring that the enemies won’t locate them… reaching the lowlands and its high temperature… many leaning on one another, some are even carried by their comrades… The production as well as the choice of actors and the scenario takes you from your gut.

At some point, Wedi Shawl explained how a local dweller, offered to give them one camel for food in the middle of the desert. The camel was then cooked and shared among the 800 people. “Can you imagine, one camel for all of us? We were sitting on the ground, and one piece of meat which looked like more of a candy was distributed to us”. Throughout the movie, you see the exhaustion read on the faces of the youth. The meat of the camel was eaten in its integrity and even the skin was cooked. The story line continues when they arrived closed to a village of Rashaida, the survival instinct changed them into animals as they all rushed into their tent scaring the nomadic community. Young men and women eating anything they found even flour …

This story, a struggle within a struggle took the attention of the spectators in Cinema Roma last week. It shows how without even reaching the front, the journey towards it was a perilous one and in which many lost their lives on the way. This touching movie and its great production surely will be remembered by the audience who could not leave their chair at the end of it.

Another touching movie, Qelebet meaning chain, is also a movie broadcasted during the Independence Day festivities. In this movie, as a continuity of the armed struggle, it shows the compilation of events after another throughout history as well as the numerous attempts against the very existence of Eritrea since its independence. Thus, the title goes in line with the narration by adding past speeches by different members of the international community bargaining on the rights to sovereignty of Eritrea. The story continues with the border war of 1998-2000 in which, throughout the three offences more than 20,000 youth lost their lives in the battle without failing to recall the hundreds of thousands Eritreans, residing in Ethiopia, forcibly repatriated to Eritrea.

The documentary highlights the offence in an area called Adi Begi’o, near the town of Adi Quala. Witnesses, including former colonels and generals talks about how in this small area, a high number of lives were lost in a very short period of time. One of the colonel interviewed could not hold his tears in front of the camera. Tears in the audience. Adi Begi’o was the target of high violence and hostilities towards civilians and the army. The loss of young Eritrean soldiers, Warsay, during the border war was a continued chain of events that the movie tried to portray and, by adding the human side of it, touched all of us. Qelebet, thus, aimed at looking at the chain of events that Eritrea and its people is going through since its independence until today and that the last 25 years of independence were constantly put under challenges.

The impact of the armed struggle and the ongoing struggle in preserving its existence could not be complete without looking at the daily struggle of the civil society during the armed struggle as well as those living in exile. This is what the movie, Godena Kaiser or Street Kaiser looked at. This movie realized between Eritrea and the city of Frankfurt in Germany managed to bring all these elements into one production with success. Godena Kaiser, a street in Frankfurt look ‘s at the story of a young man and his family and how he ended up living in this German city from the eyes of an Eritrean man who met him in this street called Kaiser.

The story line starts by looking at the life of this man during his childhood and how his older brother, who was a brave student decided to join the armed struggle, leaving his mother and siblings alone. The young man while growing up was never satisfied and was constantly looking for entertainment while his sister will sell vegetables at the market in Asmara. The life was fine until he decided to leave for the Sudan by taking his mother’s gold jewelry. At the time of independence, the older brother became a martyr. The mother always talking to his photo portray of ‘Suwat’ martyr in her living room.

By the time, the daughter was perceived as a spy for Shaebia, or the Eritrean Government, when she moved to Addis Ababa and her eyes were wounded leaving her blind. As the mother and daughter were both living in Addis Ababa, they were part of those forcibly repatriated to Eritrea. The movie, then, while the narration explained, shows images and videos of Eritreans of all ages desperately reaching Eritrea wearing only their pyjamas. Throughout the movie, you see footage of the young man wandering in the streets of Frankfurt while begging for money and getting his drugs while at the same time seeing his inner distress of living in exile and leaving his mother and sister looking out for themselves.

The numerous touching movies were also in competition with the numerous live theatrical performances in Asmara. One of them, the story of ‘Gual General’, is performed by two wonderful actresses. As we have seen in many other performances throughout this month, the importance of telling our story is highlighted. This one is a story of a woman who was a fedayin, or an EPLF agent in urban settings, who had to handle with Ethiopian Derg soldiers and generals. With her courage, she managed to get information as well as taking lives of many. During this live performance, a young woman is talking to her mother, a former tegadalit, who was a close friend to the other one.On the occasion of a writing competition, the young girl asked her mother to tell the story of her friend who is a martyr. The story is narrated with all the emotions while showing short clips of this martyred tegadalit at the back. Throughout the story, the young woman writes the story told by her mother and she won the competition. While her mother congratulates her, suddenly, the daughter tells her mother that she would have loved to hear her story also and that if she wasn’t alive, herself won’t have been able to tell her friend’s story. Without telling story, what would the new generation knows from their elders? The mother stands by her side and tells her that her friend had a little girl when she died…

Clearly, this year, an immense effort from the art world has been realized and it shows the great potential for further film productions in the years to come. The numerous young actors and actress, the high quality of visual footages as well as the make-up and choice of decor were highly welcomed by the crowded during all performances that many had to stand outside due to lack of space.

As some may say, movie-making or acting performance, is telling a story with the best technology at our disposal, thus, Eritrea’s cultural world should surely continue towards this path for the next 25 years.