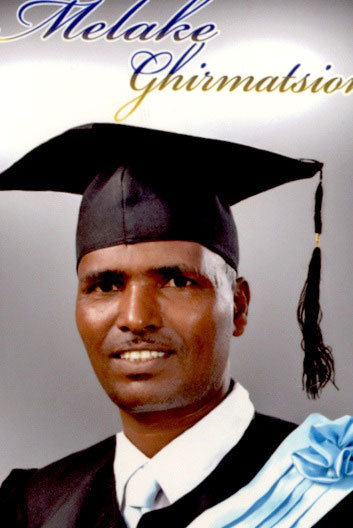 Eritrea’s younger generations are always complaining of how little is told of the massive history registered by previous generations. We wonder how and when this traditional humbleness of not boasting of our people’s prodigious feats, pending to the day in which there will be no one to narrate it to future generations.
As freedom fighters (Tegadelti) don’t say much I thought a Warsai would be more forward, but I found myself mistaken, Warsai too don’t assert! Nevertheless, I want to share with you the little, which even in its littleness amazed me with its massiveness, I give you Melake Germatsion.
He was born in 1977 and joined the 8th round to Sawa, as Eritrea was being threatened by Ethiopian successive invasions, Melake and his round mates’ joined the war assigned as a Mortar operator to safeguard the sovereignty of Eritrea.
10 years later he pursued his childhood dream and joined college, he graduated in 2015 in ELT (English language Teaching).

So you joined on the second offensive?

Yes, I went to Sawa with the 8th round after completing my high school education, and since the whole situation of then had created a national alert, people from different walks of life were placed around the country.

How was Sawa back then?

Much different from how it looks now. Currently, Sawa is almost a city, it has facilities and buildings of all sorts. Back in our days only few and small buildings were present, and we stationed in tents. Sawa in those days was exclusively a military camp and not a boarding school like it is in present days.

What’s there to tell? Any kind of war is not scenic, it destroys towns, it kills people and it has left unforgettable scars in the history of Eritrea and its people.
At that time similarly to previous decades in the struggle for independence, the Eritrean people were left with no alternative option. And what to do? Our land was and is still occupied with our people living in towns and villages near the border were being treated in atrocious ways one can’t even begin to imagine, and so everybody joined hands in one communal aim.

The Battle of Eigri Mekel

It was one of the bloodiest battles, it took place in February to March 1999. Truth be told, Warsai pulled the trigger until their index finger would bleed, and I am not exaggerating.
The Eritrean Defense Forces’ army are well acquainted with the area, it is our country after all, and so our fortification was suitable for offense. As per the soldiers of the Ethiopian army…. I don’t know if they had orders to just run in front of our bullets! They came running like horses without a charioteer. That is why I said that Warsai pulled triggers ’til their index fingers bleed. I never knew living human beings could ever be annihilated until the battle of Eigri Mekel.

That is because I have seen it. You know at that time when we reached Barentu, we found the town in a real chaos, shops were unmanned, and houses burnt, buildings brought dawn to the ground, small kids’ flip-flops, grownups’ sandals and women shawls disseminated around the roads. It was a mess.
The enemy soldiers destroyed the martyr’s cemetery in Haikota and scattered their skeletons. Who does that really? It is a matter of humanity, don’t they have martyrs themselves?
We, were outraged. Furious. That is why we felt that our officials were being unfair to us when we were told to retreat. Most of us refused and declined the order in a pre-meeting, but then we were told that attacking in the most suitable areas has been one of the main war tactics of the EPLF, we were also informed that we would possibly avoid numerous disastrous causalities.

You were 23 at that moment. Too young?

No! No Eritrean is too young, ever. Our history witnesses it. Our independence was achieved by youth, so it is only innate for the youth of then to do their due part. Students left schools, they run away from home, fathers joined too leaving families behind to defend the country. And some might think that only men were involved, but no, our sisters were strongly by our side. We thought we were immortals.

So every Eritrean was involved?

Exactly! In the war time troops moved a lot, and through every city, town and village we went people welcomed us like heroes. They would prepare great feasts for us from the small they had. Even when we were on the move, people would throw fruits and snacks. Some would even come to the war zone to bring us water with small account to their lives. They would sneak in, because it is prohibited for civilians to come close to any of those zones. There were actual units that had the mission of insuring the civilian’s safety.

Can I tell you something that touched me deeply?

One day after a long day of battle in Tserona, our unit was rushing as we were on the move, and so a boy of not more than 7 was holding a packet of biscuits and then he saw us, so he opened it run towards us, took one for himself to leave the rest for us and then he run back. I remember it vividly till this very second.
I don’t know, if I need to say more.

At the end, what do you have to say on the occasion of Eritrean Independence Silver Jubilee?

Greeting to my people. We overcame so many obstacles, we still are facing some challenges but on the other hand we will keep striving to build our country, to make it advanced, to safeguard it by all means. Meanwhile,we will create a peaceful place for our younger siblings, where they honor the nation being elites and make it matchless.

Many don’t realize that is there is some sublime power keeping us together; our martyrs. Situations that threaten our people while hindering our development strives might be effective for some time but won’t last. So we Eritreans will keep marching to the pace of time.