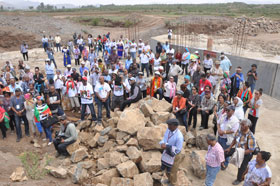 Eritrean nationals residing in the Diaspora and who are here to participate in the Silver Jubilee Independence Day celebrations visited historical places from 17 to 18 May.

Asmara, 20 May 2016- Eritrean nationals residing in the Diaspora and who are here to participate in the Silver Jubilee Independence Day celebrations visited historical places from 17 to 18 May. The historical places they visited include the Nakfa and Egri-Mekel trenches as well as Adi-Hallo Dam.

The nationals who came from the US, Canada, Norway, the UK, Germany, Holland, Ireland, Sudan, Saudi Arabia, Australia and others conducted the visit in three groups.

Upon arrival at the Adi-Hallo Dam participants of the tour were welcomed by President Isaias Afwerki and senior Government and PFDJ officials. They also received briefings on the programs to construct dams and other development activities relating with the construction of dams.

At the wreath laying ceremony conducted at Dubaruwa Martyrs Cemetery, the Administrator of the sub-zone, Mr. Abraham Teka, commending the initiative the Eritrean nationals residing in the Diaspora took to remember martyrs, called for reinforcing their participation for the success of the national development endeavors.

On their way to Nakfa the participants of the tour visited Elabered where fierce battle took place during the strategic withdrawal as well as Meshalit and Ad-Shrum places in which heroic feats were demonstrated in the offensive for the demise of Nadew Ez.

Upon visiting to the Egri-Mekel trenches where the Eritrean defense forces inflicted heavy human and material damage on the TPLF regime’s invading forces, they received extensive briefings.

The participants of the tour expressed appreciation for the warm welcome they were accorded in all the areas they visited. They also expressed conviction to reinforce their staunch resistance and organization in addition to play due role for the success of the national development programs.

Photo exhibition depicting memories of referendum and feelings of independence

Independence Torch in its second week in Central region