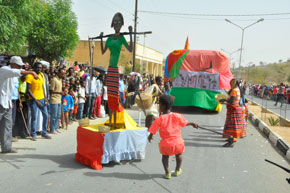 The Silver Jubilee Independence Day Anniversary was colorfully celebrated in the Gash-Barka region on May 20 in the town of Barentu at a regional level.

Barentu, 23 May 2016- The Silver Jubilee Independence Day Anniversary was colorfully celebrated in the Gash-Barka region on May 20 in the town of Barentu at a regional level.

Senior government officials and thousands of the residents of the region took part in the celebration.

The celebration was highlighted by camel race, marching band, military parade, cultural and artistic shows as well as children’s performances.

In a speech he delivered during the event, Mr. Omer Mohammed, work manager of the region, pointed out that the residents of the region have accorded warm welcome to the Independence Torch during its arrival in the region. He also expressed appreciation for the efforts the residents conducted to enthusiastically mark the special event.

The work manager also indicated that in the past 25 years of independence the Eritrean people have registered tremendous economic developments despite the different enemy conspiracies.

The Chairman of the Holidays Coordinating Committee, Mr. Bereket Tekeste underlined that the Independence Day has a great value in the hearts of the Eritrean people and that the special day also reminds every citizen to renew the pledge to the martyrs who paid their lives for the Eritrean people to live in peace, harmony and prosperity.

In the same vein, a carnival show in continuation with the Silver Jubilee Independence Day anniversary was staged in Barentu on 20 May in which the 11 sub-zones participated.

The carnival showcased the development programs implemented in the region in the past 25 years of independence and the beauty and diversity as well as the multi cultures of the Gash Barka region.

The coordinating committee of the program indicated that the carnival show was prepared by the internal capacity of the sub zones in the region.
The carnival show has received broad admiration from the residents of the Barentu town.