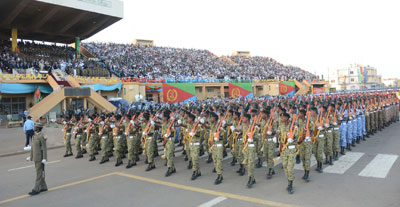 It is Tuesday morning, after a long night celebrating the eve of the Independence Day, the streets of Asmara are quite, people take the time to finally meet and enjoy breakfast together. Soon after, men and women start to get ready for the official ceremony of Eritrea’s Silver Jubilee Anniversary. The 25th anniversary finally arrived. This special anniversary has been celebrated for the whole month of May in great zeal throughout the country, featuring art performances, music, drama, carnival, sport competitions as well as social gatherings in all cities.

This sunny Tuesday, the Independence Avenue is closed, allowing only people to walk by. It is now about 3pm, Eritrean women wearing their latest traditional outfit with some silver colored print while men look elegant in their suit and tie representing the Eritrean flag. People start to slowly get their seat at the official ceremony in Bahti Meskerem.

Protocol, organizing committee as well as the media are making the latest arrangements. Flags are up and waving in the air. Members of the expat community, as well as children and parents are getting their seat while scrutinizing the program booklet. Young Eritreans in blue and white representing the National Union of Eritrean Youth and Students (NUEYS) are part of the hospitality team and showing a high level of organization.

Seats are quickly filled up, long lost friends from the diaspora greet each other by saying ‘elelelelel’. Government bodies, military officials, PFDJ Officials, diplomats and members of the international community and religious leaders finally arrived. A show of helicopter and a musical background already started to entertain the crowd patiently awaiting for the opening ceremony. President Isaias Afwerki arrived with standing ovation. He greeted the crowd before taking seat.

The ceremony started with a minute of silence in memory of Eritrean Martyrs. The torch, ‘shege’ in Tigrinya, is finally arriving after a long journey nationwide which started on the 15th January 2016. Zeresenay Tadesse, Eritrean Olympic athlete is the lucky one holding it and illuminating the last destination. Crowd is standing, dancing to the Eritrean beat, waving the flag and dancing with one another.

Ambassador Zemede Tekle, Head of the Commission of Sport and Culture gave his welcoming speech, in which he highlighted how the people of Eritrea have worked hard and with positive spirit to make the silver jubilee anniversary a success. Artists, sportsmen and women, staff from various departments worked day and night in preparing this special day, he added. Following his eloquent speech, President Isaias Afwerki took the attention of the crowd during his official remark on the occasion. He stressed the long journey and resilience of the people of Eritrea dating back from 1941 and how Eritrea faces constant challenges even during the independence, thus, the theme of a quarter of resilience and development goes in line with the Eritrean reality.

The symbol of resilience was then beautifully portrayed with the march opened by camels carrying materials and people. The camel, the symbol of Eritrea’s resistance and resilience was portrayed while men in traditional Tigre clothing carried the EPLF flag. The ceremony continues with the march by members of the defense and police forces with such eager and zeal. Young women leading their march amazed the crowd and close-up camera on the two giant screens installed for the occasion make everyone closer to this youth. This young women, the face of the Eritrean youth, the youth of the silver jubilee make the elders proud of this continuing legacy.

The song, ‘Asseye, Assena’ by Filmon ‘Queshat’ then take the feeling of participants and quickly the whole stadium is standing and dancing in unison.

The march continues of people from the Diaspora waving both the Eritrean flag as well as their respective countries, passing by Canada, the U.S., Saudi Arabia, Sudan, Switzerland, and Germany among others. Following the Diaspora, all the nine ethnic groups are then showing off their cultural heritage through dances and cultural outfits.

The singer Kaleab Teweldemedhin arrives singing probably the most hit song of the year, called ‘shigey intay riekhi’ or my torch what have you seen. The metaphor used in the lyrics as the torch reminds of the long journey and how through resilience it reaches its destination. The beats gets everyone into another world, women in their silver outfits from head to toe, capturing the attention of everyone including the cameras. Banners written ‘Eritrea Never Kneel Down’ are proudly displayed up in the public. Young men from NUEYS are showing off their dancing skills, while older women are joining them, bringing different generations together. Kaleab singing ‘Neaki mber shigey’ to you I am living my torch, while young dancers hold a torch throughout their performance.

The show continues with a song in hedareb ‘sahleb ebal’ by Humed Mahmud Tita, followed by Bilen language by Hadjait Mendal called ‘awdi’ including a scene of the everyday life throughout the performances.

As Eritrea put great effort in including artists from the international participators in its program, a collaboration song by artists who have been performing for the last three weeks in the country come together. The harmony and peace is clearly the message behind. Young artists from Germany, passing by Uganda, Latin America and the U.S. took part in this fantastic collaboration singing Natzenetey or my independence in chorus. A song written in English by Sophia Tesfamariam, called Shadows in the Mountains, looked back at the struggle and the decades spent in the trenches for the respect of the rights for independence and identity of Eritreans. Four Sudanese talented singers continue the performance through three wonderful songs and illustrating the strong relations between the two countries; the Sudan and Eritrea.

Wedi Zagr arrives singing ‘niberi, niberi’ or live, live. A message to Eritrea and Khadija Admay and her powerful voice continues the show in Tigre with ‘Wed Gebil’ and wearing a reddish lewiet by dancers adding a touch of silver on their scarf while the torch keeps illuminating this early evening.

Children at the back with their shiny color are getting ready for their tremendous performance. As the President mentioned during his speech, he firstly thanks children and youth for their hard work and indeed, the unforgettable performance of this year’s anniversary is surely the great involvement of children. Indeed, under the theme of resilience and development, a great live representation of both meaning was represented by hundreds of well-organized children from the age of 7 to 15. Wearing the colors of the flag and with the impressive lighting and sound system, the audience is attentively listening and watching the performance.

While youth performed representation of Eritrea’s history for independence, a video show including historical images of the struggle all the way to the arrival of Tegadelti to Asmara in 1991 and the referendum of 1993 were all carefully watched by the guests. The show continues with a young girl standing inside a giant turtle. The Turtle, the symbol of Eritrea’s development policies where it believes that development and prosperity, even if it takes steps as the turtle marches, it is worth taking it by avoiding ‘short cut’ through aid for instance and preserving its vision of self-reliance. The young talented girl addressed the thousands of people gathered together with confident through jokes and powerful message while the song ‘Lemat iyu timirti, Berhan iyu timirti’ or development is education, the light is education.

Beats of Fihira songs mixed with modern beats heat the crowd. A young artist, Luam Teklit, then concludes the show with her song named ‘yebelki’lo hizbi’ the people is telling you, where she said how culture is a way of promoting our identity, our very existence. Sport is one way of such promotion, thus, group of cyclists and athletes then take part to the show.

The little girl comes back by saying how the turtle takes a long challenging journey but at the end it is worth it. She continues by saying that she can’t wait to be a grown up and celebrate her silver jubilee which it will be the country golden year in the coming 25 years. She concluded by saying adjokum adjona’ or courage to you, to us all and a united elelelel is heard in the audience.

The beautiful official ceremony of Eritrea’ silver jubilee anniversary is synonym of success, steadfastness as well as impressive organization. The month of May was home to numerous amount of performances and great participations and responses from the public coming from all over the country, the diaspora as well as tourists. While the National Anthem put an end to the ceremony, it is also the time to reflect to the peaceful celebration and the high quality of activities that clearly is putting the level high, for Eritrea’s next 25 years towards development through resilience.