A Shining Night before a MoreShining One! 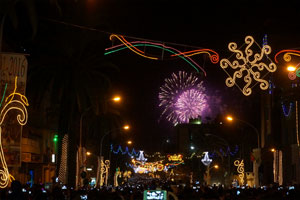 The Independence of Eritrea was achieved only three months before I was born. I was only conceived when all Eritreans inside the country and abroad were celebrating their first marvelous day. In that respect, over the twenty five years of independence, every Eritrean has keenly devoted every endeavors to the country’s prosperity and have ever since been revering the month of May, especially the 24th, which gave them the real feeling of freedom.

May the 24th marks the turning point of the people of Eritrea into the Government of Eritrea. It is like a national pilgrimage. No one remained in the house; the children up to the elders were there, to make the Silver Jubilee of Independence Day more beautiful and attractive and to leave a meaningful impression.

The concerned parties who have been assigned to lead the events of the occasion have been participating the whole week. The eve night was among the many days, where everyone went out to the streets till midnight and over, waiting to see the glamorous fireworks. I was amazed to see people of all ages flowing into the downtown streets of Asmara late after 10 pm when I was running back to my place after a very hectic day of work. Then I realized it was the big night that all the Eritreans waited for the matchless independence night, and there I was, realizing the 25th Independence Day of Eritrea and my 25th birthday as well was due in three months. Hence, here I am putting words for the birthday of my country and my self being on the verge of my 25th birthday.

May 23rd night, was a day before a great day. Soon after the fireworks, the skies were off limit brightened with rocket pyrotechnics along with full moon taking the majority part. More than half an hour of spectacular lights renewed the hearts of the people and puffed up the 25 years of Independence. It was a moment of ‘Wow!’ to anybody who was watching it from different corners of the city. Women expressing and applauding their joy with traditional ways of ululation, ‘Ellllll….Elllll’, every now and then the lights go up into the skies and look more colorful to welcome the great day. When all of these was happening, I was in the rooftop of my house, so I could see everything.

I could see how everybody was excited and waiting the night while breathing the fresh air of peace being in the homeland. Eritreans residing abroad taking

their photos, foreigners asking citizens for the meaning and history of landmarks inside the city, entertainment groups showing their presentations, children having fun with the shining colorful lights, security watching over surroundings making sure the safety of everyone, gave the environment a genuine atmosphere of celebration. The main avenue from Nakfa house, Tegadelti street, Semaetat and Harnet Avenues, all the way up to Bahti Meskerem Square was full of citizens and visitors who were out there in honor of the great day of liberation. It was easily noted what peace means to Eritreans. The heavy price that has been paid during the revolutionary struggle, and to safeguard the nation’s sovereignty after independence was all to secure this historic land, so as its people to live in peace and tranquility.

When I happen to arrive at the Bahti Meskerem square to be part of the remarkable day, the stages were full to capacity with thousands of people; women wearing their stunning Zurias and men with their traditional and formal outfits, along with the special hats and t-shirts of the National Union Of Eritrean Youth and Students (NUEYS). The atmosphere was a lot more than these words can tell, foreigners and citizens waiting for the programs of the day to launch and express their deep feelings by the art performances due to be presented in the event. Before the senior officials and guests of honor arrive at the square, I got the chance to talk to some individuals from abroad and inside. A surprising coincidence, I met two different foreigners who happen to have Eritrean spouses. Mr. Hans van der Splinter, a Dutch, with an Eritrean wife and Mrs. Edith Gilemariam who has visited Eritrea several times with her Eritrean husband.

Mr. Hans told us that he has seen many changes since the last years, and mentioned some out of the many, he had witnessed like the Harat buses progress, new health centers constructed in the country. Mr. Hans further described the people of Eritrea as peaceful, generous, and hospitable and that he feels perfectly safe in the country with them. When asked concerning the theme of the 25th anniversary, “Quarter Century of Resilience and Development”, he said that it expresses Eritreans built their country through self-reliance, which means everything. Moreover, Ms. Edith said that on top of their full devotion to their homeland, Eritreans they are an inspiration to African people. A young lady, Feven Woldu from Berlin, Germany, on her part added that she is really proud of being an Eritrean, to see the nation’s progress, and described the event as “family get together” as it was a moment that brought together all Eritreans into one field. Mrs. Nazreth Berhe, who lived in Switzerland for 26 years was overwhelmed on meeting the military forces that are watching over the nation day and night, war disables. She also said that she is even more fascinated with the rapid infrastructure development of dams in Adi Halo and Gergera.

freedom in the streets of Asmara. The silver jubilee has indeed been shining all over the month throughout the country. The Independence Torch, ‘Sheg Natsenet’, had travelled more than 3000 kilometers to finally make it into the Harnet Avenue. The military parade was one of the eye catching moments of the event, when you see all of the highly trained youngsters perform quite beautifully in the field with their straight lineups and resilient voices. As the time runs into the late afternoon, the programs along with the lighting systems got more appealing.

To witness all of the day’s happenings, I positioned myself in the bottom of the seats and watched over the joy and how the people were determined to their freedom and that defines freedom in all weights does not have a counterpart. Hence, just as the 25 years of resilience and development have witnessed unmatched development activities founded on self-reliance, the years to come have more prospects than it ever did. Indeed, the nights of the independence shined and made the hearts of everyone shine.

“…A perfect example across the world”