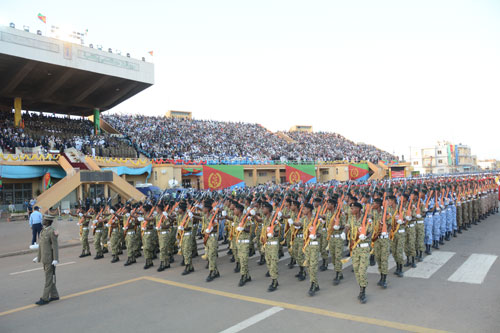 In this month of May, Eritrea is celebrating its Silver Jubilee of Independence, which is a sensational tribute to our fallen martyrs. It is a historic record, where Eritreans fought against giant forces for more than half a century, to define their self-determination. The struggle for independence is a testimony to the strong resistance of Eritreans against relentless and all kinds of fabricated aggressions. Eritrea`s heroes/ heroines gave their precious lives for the possibility of this nation, under a strong and vigorous leadership. The sacrifices and commitments of these fighters alongside the fearless people were historically unique and a big lesson to the giant oppressors.

The struggle for independence was unbearable; however, there was a dream that one day this nation would rise up and prosper. A dream which has turned to reality through mass-participation on the 24th of May of 1991, 25 years to this day

Now, 25years later, a distinguished national event of our independence is being celebrated nationwide, in strong vibes and sentiments based on a deep-rooted culture of pride of its citizens. The jubilance magnifies the home-grown traditions of commonality, resilience and sacrifice, grasped during the long course of the struggle for independence. Eritrea and its people are celebrating in a strong zeal, enthusiasm, and pride, in exclusively public centered festivities. The celebrations may look like simple music concerts for many; however, the meaning is beyond imagination.

It is a sign of triumph that maintains the solidarity of its people by orchestrating the unique sense of togetherness of its people towards a nation building process. We Eritreans celebrate our nation as being exceptionally ethical and confidently contend that dignity; fairness and a unique sense of nationalism are what differentiate us from other societies.

The celebration of our independence is valuable as it is bounded by extraordinary reminiscences which are not yet known and /or narrated to the world. The long year’s battle for freedom had left an unforgettable impact on the Eritrean society. It is not possible to disclose the miraculous history of the Eritrean struggle for independence in this short paper; meanwhile, it is worth mentioning some bold points. The Eritrean struggle for independence was: (i) involving every family, ethnic and religious group, who represented the entire Eritrean society without discrimination; (ii) a struggle, based on exclusive mass-participation and dynamic leadership, (iii) a struggle that whitewashed the World Community denial to Eritrea`s independence; (iv) a struggle, that culminated the hideous religious discriminations introduced by opportunistic colonizers; (v) a struggle, that women affirmed and secured their equality for the first time in the country`s political history; (vi) a struggle, with 99.83 % vote in favor of independence that assured the well-built solidarity and self-esteem of its nine ethno-linguistic groups.

Within the last 25 years of post-independence, Eritrea`s sovereignty has been unequivocally violated. For a decade and a half, Eritreans condemned the continued military presence from the neighboring country (Ethiopia) in our sovereign land, after signing the final and binding Algiers Peace Treaty on 18 June 2000. However, despite Ethiopia’s violation of the rule of law, the International Community (UNSC) and its allies intimidated Eritrea`s sovereignty with fallacious allegations to deviate the right path to development. But, this has not been unanticipated to the Eritrean people, who have been spent more than half a century fighting evil atrocities and fictitious accusation.

The Eritrean people melted together into a harmonious whole with a common cultural struggle and fought vigorously for their identity, peace and sovereignty. They cultivated a home-grown brand of democracy, by the people and for the people. This democracy fostered self-reliance, mutual cooperation and secured sovereignty, peace, and development which is incomparable and provides an exemplary historic record for the region.
However, this kind of democracy was a threat to the aggressors and their allies. They tried to demolish ours and plant their own conjured democracy, in order to throw the Eritrean people again into never-ending hardships and poverty. The corrupt political agenda in our region was unquestionably deceiving our people and sadly it is not organic. This baloney political agenda is manufactured and politically imported by cold-hearted superpowers and manipulative societies, lately obediently implemented by treacherous allies in the region. However, once again the Eritrean People is re-affirming, “If war with Eritrea was difficult yesterday, it is impossible today”.

Eritrea`s crystal-clear resource is its people, and historically it is proven. The Eritrean people died more than once for the country they loved, and defended their identity with sweat and blood. During those hard times, that is, when even the stones were burning, everything was against us; likewise the same people are now challenging superpowers. At this very moment, these people are celebrating their Silver Jubilee of Independence with pride and dignity. The people are expressing their jubilance, remembering the valuable prices paid in each second of every step they take.

The struggle is still continuing with the same vibe of solidarity, vigilance, and resilience against continuous repulsive fabrications, in order to create a better Eritrea and to sustain the well-being and quality of life of its people.

A Shining Night before a MoreShining One!