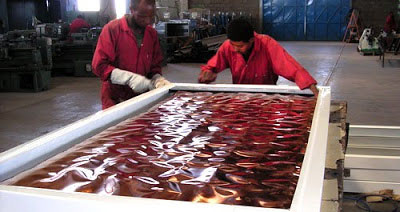 The energy sector represents a very substantial portion of Eritrea’s national infrastructure development. The recently constructed Hirgigo power plant and grid expansion project that has increased installed electricity generation capacity to 130-200 mega watts at an investment cost of at least $160 million over about five years. This represents more than $30 million per year of capital investment expenditure. In 1997 capital expenditures by the Eritrean government were 19% of gross national product, and capital investments by the private sector were 829 million Nakfa or 14% of GNP.

Energy sector investments are at least 5% of GNP and represent more than 15% of national capital expenditures recently.

The macro economic data described above shows that the energy sector has a very substantial role in Eritrea’s development. Energy sector investments are very important for long term economic strategy for several reasons. One reason is that the size of the energy import expenses and the drain that they provide on national balance of payments. The second reason stems from the importance that access to electricity has in economic development and improved standards of living. The effectiveness of electrification in enhancing productivity means that the pace of electricity demand growth will continue at its current rapid rate. The current electrification rate (fraction of people with access to electricity) in Eritrea is about 40%.

The third factor that makes energy sector development a crucial strategic issue is the fact that current and future biomass consumption is a potentially growing drain on Eritrea’s ecosystem. There is rather limited biomass in Eritrea because biomass production is limited by scarce rainfall. Therefore energy sector investments that decrease biomass consumption or increase the biomass productivity of the ecosystem (e.g. reforestation programs) will have a large impact on Eritrea’s future environmental capital.

Energy sector investments in the near-term will have a dramatic impact on future energy sector expenses and environmental sustainability. If there are no efficiency improvements in the energy sector, then the rapid growth of energy demand will degrade Eritrea’s environmental capital and expand Eritrea’s already large international trade deficit. On the other hand if aggressive investments are made in all subsectors of energy development, I believe that substantial environmental rehabilitation can be achieved, and Eritrea’s trade deficit can be improved with enhanced national capital accumulation.

First and foremost, the sufficient, reliable and sustainable production and supply of affordable energy throughout Eritrea is the main objective of the Government’s policy in the energy sector.

The general policy is to provide the energy services based on a diversified supply of energy sources. The specific objectives of this policy are two fold. Firstly, it is the intention to facilitate the economic growth through the provision of adequate, reliable and sustainable refined energy at an economic price and at appropriate locations. Secondly, the policy is aimed at improving the living standards of the population through the provision of affordable energy. The implementation of the policy must be mindful of the desire to halt, and in some cases, reverse the recent trend in environmental degradation, and of the need to make the most effective use of limited resources, particularly in the initial stages of development.
To achieve the above mentioned objectives, the Ministry of Energy and Mines is entrusted with the task of designing and refining policies, strategies and regulatory issues in the energy sector, approving the corresponding plans and programmes formulated in the sector and supervising their implementation.

Part of growing Eritrea’s energy sector has been to fully concentrate on how to promote renewable energies and it has been indicated that biomass energy source cannot be sustainably harvested at the present rate of take-off relative to the stock. As it will continue to be the major source of energy for rural areas, proper management practices have to be introduced. Development of biomass resources either on a large-scale levels (reforestation, afforestation), community level (community woodlots) or individual level (agroforestry/farm tree planting) when assisted by the removal of barriers to proper tree management like water and soil conservation, tree species selection, land ownership, ownership of planted trees, alternative uses of land etc, could lead to a success story in regenerating the dwindling resource. The Alighider Farm Estate has the potential to supply raw materials (cotton and sorghum stalks, elephant grass, banana leaves etc.) for briquette production for at least 15 plants each of capacity 4000 tons per year. Briquettes, a chopped and compressed agricultural waste, are excellent replacement for fuel wood and charcoal. Alternatively, the Agricultural waste could be used to generate electricity thermally.

In terms of solar energy, preparation of solar radiation maps for Eritrea is in progress. This work is carried out by the Energy Research and Training Centre of the Ministry of Energy and Mines and is based on satellite data and ground station data measured at 10 automatic recording meteorological stations. The average annual global radiation is found to be in the range of 5-6 kWh/m2. There is no doubt that Eritrea has a very high potential for utilization of solar energy. Possible uses are solar photovoltaic systems, solar water heaters and sterilizers, solar crop dryers and tobacco curing, solar desalination plants, solar cooling and refrigeration, solar thermal electricity generation and are among the investment opportunities. A local partial manufacture of solar photovoltaic panels and associated batteries is highly beneficial and attractive to reduce costs.

As a result of meticulous search and investment, solar panels have subsequently been installed throughout the country, and they now power public buildings, streetlights, clinics, hospitals and schools. In 2008, the Ministry of Education began the Solar Powered Instructional Computer Technology (ICT) in Rural Schools Project, which sought to address the problem of lack of reliable electric power supply in many rural schools. The first pilot project was implemented in Gogne junior and secondary school, a remote school in the western lowlands of the country (within the Gash Barka region). With the pilot’s broad success, the project soon expanded and witnessed the installation of solar powered ICT labs in 24 schools.
Another form of renewable energy is Wind. The historical and recent data that exists suggest that the southern coastal region has very good wind conditions for electricity generation. In fact the measurements as reflected in the wind-class classification shows Assab and Gahro, close to the border with Djibouti to the south, have among the best potentials in Africa. Windy passes that are suited for electricity generation also exist in the northern mountains as represented by the Dekemhare and Gizgiza stations. The critical average wind speed for wind pumping of about 2.5 m/s is available throughout Eritrea. The recently completed Global Environmental Facility sponsored feasibility study for wind energy applications in the southern coastal areas has shown that a 2.4 MW wind park in Assab and many off grid wind stand alone, wind-diesel or wind-solar hybrid systems are very much feasible and quite economically attractive for investors. Wind pumps for irrigation or watering villages and their livestock have very good potential practically in all locations in Eritrea.

In addition geothermal steam is another endowed renewable energy, though in its early stages of studies, part of Eritrea shows that it is situated in a volcanic area. Measurements at the volcanic mountain Alid indicate an underlying hydrothermal reservoir with a temperature in the range of 250 – 350 oC. Studies have concluded that the water to rock ratio in the reservoir is high enough for a developable hydro-thermal system. It appears as possible to install one or several power stations in this area. The distance to the existing transmission line between Massawa and Asmara is not more than about 100 km, which makes the site even more interesting for development. More detailed studies are however necessary for an assessment of the financial and environmental feasibility of exploiting this geothermal resource.

Many of the aforementioned developments suggest that Eritrea has improved its energy capabilities. According to government officials, whereas during the initial period of post-independence, the entire power generation within Eritrea was at a feeble 15 mega watts, today it hovers at 200 megawatts. However, that figure is still miniscule, and the energy sector must continue to remain a key focus. Most immediately, government officials point out that Eritrea has ordered generators that produce an extra 50 megawatts, and improvements continue at the Hirgogo plant as part of a multi-million dollar deal signed with China’s SFECO Group company. Furthermore, the recently signed multi million deal with European Union to rehabilitate Eritrea’s energy sector proves Eritrea is in the right track to energy development.

Additionally, the development of a second power plant is currently in the research and planning stages. Eritrea continues to invest in expansions and enhancements of its solar power capabilities; a capacity of close to 10 megawatts of solar power is to be added to what has already been installed, beginning in early 2014.

In summary, for an emerging, developing country such as Eritrea, alternative, renewable sources of energy represent an extremely effective component within broader national development goals, and they directly and positively impact the lives of individual citizens. The international community and developmental organizations can play critically constructive roles by supporting new projects or augmenting existing ones, working cooperatively with Eritrean companies and ministries, and – quite importantly – promoting peace and stability in the region. In particular, solar energy is a game-changing prospect for Eritrea.

The nation is accelerating and encouraging the domestic development of renewable energy.

The Eritrean government is legislating favorable policies on permitting process and providing start-up capital to promote the growth of solar energy.

State and central governments are providing initiatives and other supports in order to increase solar power plant capacity. Renewable energy and especially solar energy is a win-win situation for Eritrea and the environment, and has the potential to power Eritrea’s economy, create millions of new jobs and change the face of Eritrea as a green nation.