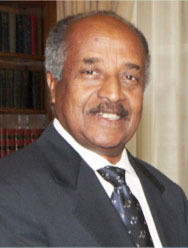 It gives me a great pleasure to address this meeting on “Sustainability of Migratory Phenomenon; towards a new Model of Dialogue”. Immigration has a long history and currently constitutes a mighty force globally with deep ramifications in the economic, social and political landscape of countries. The directions of flows are asymmetric; the broader pool has heterogeneous traits and is linked to human trafficking and related crimes…..

Migration is not peculiar to Eritrea and it assumed different forms at different times of its history. The migration flow in the last decade in particular demands understanding of Eritrea’s concrete reality….

Eritrea’s development efforts since independence in 1991 has focused on nation building to reconstruct the tattered economy, institutions and infrastructure inherited as a result of colonial policies and the protracted war of occupation….

In this situation, illegal migration has also become a politically motivated agenda serving as part and parcel of a larger campaign to vilify, isolate and destabilize Eritrea. It is undeniable that economic challenges in the situation of the last 18 years became a reason for some to migrate in search of improved opportunities..

The youth has been the main target of the migratory conspiracy and protracted psychological warfare to lure them away from national defense and development responsibilities by attracting them to a promising “heavenly life”….Moreover, false and manipulated asylum cases have been orchestrated and used to project a false image of impending crisis so as to accuse the Eritrean Government…. President Obama’s statement in reference to Eritrea at the Global Clinton Foundation Summit in September 2012 in which he stated“ … we are partnering with groups which are helping women and children to escape from the grip of their abusers, and also helping countries to step their own efforts..”, corroborates the conspiracy perpetuated to use Eritrean migration as a political tool.

Sensationally manipulated statistics and the perceived number of Eritrean migrants, frequently quoted by the UNHCR, also became a tool of political disinformation meant to tarnish the image of Eritrea. … “UNHCR Eligibility Guidelines for Assessing the International Protection Needs for Asylum- Seekers from Eritrea” has served to compound the problem. These reports were strongly refuted by Eritrea in a document submitted to the organization in February 2016 and a joint Eritrea-UNHCR meeting on the document is anticipated soon.

Eritrea strongly believes in the Development-Migration Nexus. Hence the fundamental issue is to address the essence of the problem by ending the external threats mentioned earlier. … Furthermore, Eritrea continues to advocate for a critical appraisal of the asylum system of recipient countries to redress the effects of pull factors.

Addressing the critical human development effects has also constituted an important part of development-migration nexus in migration governance. The retention of the human capital is one of the critical challenges. Hence, continuing education and training, strengthening career structure and social mobility and transforming attitude and responsibility have been emphasized in the ongoing effort.

From the outset, it must be noted that any Eritrean citizen has the inalienable right of coming back to his country…This does not require any proxy and the Eritrean government shoulders its legal obligation of respecting and fulfilling this right. …Thousands have already returned voluntarily in the last few years thus exposing the myth and perception on the “fear of return and persecution”.

Repatriation in general should be voluntary, the modality followed being on a case by case basis that avoids mass deportation and that is handled through bilateral engagements. In any event, note is also made that legal identification of Eritreans is the sole responsibility of the Eritrean Immigration and Naturalization Department of the government.

The worst revelation in illegal Eritrean migration is the establishment of the burgeoning human trafficking global networks scattered across many regions, countries and cities. In the last 15 years these networks have been targeting Eritreans…. Diverse forms of illegal activities including illegal trade, money laundering and other criminal activities have been integrated into this migratory phenomenon that targeted Eritreans.
Eritrea has being fighting against this crime and the Eritrean Law criminalizes h u m a n t r a f fi c k i n g a n d transnational crimes of p e r s o n s . Many direct and indirect beneficiaries of this scourge have been brought to justice. It must be noted, however, that this criminal activity has the involvement of some countries, organizations, surrogate anti- Eritrean groups and pseudo-human right activists…

In the above complex situation, acknowledging and facilitating the dynamic role of the Eritrean Diaspora is an important dimension. There is visible presence of Eritreans in many counties who migrated through various means and modes. It is however, essential to acknowledge that this potential is a critical element of development both in their host country and in Eritrea and the following pertinent issues of development need to be considered:-

Their participation in national development is considered as an asset

The presence of a strong, successful and competitive network of Eritrean organizations is vital as a bridge for people-to-people relationships

Excellencies, Ladies and Gentlemen
Official visits to Eritrea in the last two years from Denmark, Norway, Germany, the UK, Switzerland, Sweden, Netherlands, Austria, Canada, etc., and by various UN agencies and several international organizations is a testimony to the growing engagement and cooperation on many issues; including on migration.

On the other, hand coordination with neighboring and transit countries has been growing. Eritrea’s effort and its on-going contribution in regional and international migration cooperation processes is also significant. Eritrea reiterates its commitment to further strengthen its contribution to the regional dynamics under the Khartoum Process and the ensuing Valletta Declaration and Plan of Action. It has also recently signed the Protocol on Transnational Organized Crimes and Trafficking of persons and will strengthen its international obligations to fulfill its duties in synergy with its national laws. In conclusion, Eritrea reiterates its commitment to further strengthen its development diplomacy on the basis of partnerships. Furthermore, it will strengthen its engagement and cooperation at regional and international levels on the basis of pragmatic migration governance that upholds collective efforts to fight illegal migration and human trafficking

I thank you Excellencies, Ladies and Gentlemen