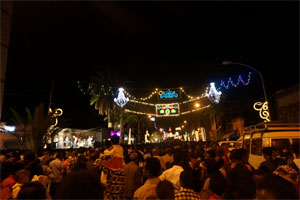 Was May of last year as hot as May of this year! People have short memories when it comes to weather. If you find certain days in Asmara unduly hot or cold and you are from Asmara, then you must have changed a lot.

“Hi, where are you coming from?”

“I am just coming from Bahti Meskerem?”

“Don’t you know that Independence Day festival has already started?”

We have great popular revolution that heralded independence days that fall on hot seasons. The American 4th of July and the French 14th of July are good examples. They say that popular uprising take place often during hot months. Heat makes people impatient and more irritated. That’s why tyrants don’t like summer time.

“Have you seen Gual General at Cinema Asmara?”

“A human avalanche was waiting outside to crash in.”

Some people try to associate mob resurrections with climatic changes. As much as the moon influences peoples moods and temperament so does the sun. But there is something mysterious about summer. Winter is the symbol of death and desolation. Spring herald resurrection and summer is the time boom and the appearances of perfections.

What about the Bolshevik revolution? That one took place on a cold October day, when prince Fgor was still in bed with Princess Tatiana. Some minds respond to cold weather.

Our independence day could have fallen on the month of November or December, where the sun sets at 6 o’clock and the cold Siberian wind causes everybody to hurry up after work to the warmth of home and the family leaving the streets of Asmara to people with cars and to those who enjoy their beers once in a while.

“Hi, Astier, it has been ages. Do you live in Asmara?”

“No have just arrived from Germany, to celebrate Independence Day?”

“She can speak Tigrigna. I have taught her myself.”

“Where is Haile (her husband).”

“He is coming in August for the festival.”

Maybe the trip was expensive for both. And Haile had to save money by working summer. After all he can celebrate Independence Day in Germany and Festival Eritrea here. And it would be the other way round for Astier.

Why Eritrea was freed in May and not in January or in February can only be answered by analyzing a lot of variables and paradigms. It is like cutting down a big tree. You go on hacking at it with an axe. But no one can tell precisely when the tree will fall down.

By the way, does it matter at all to know the exact time? Not much.

Rain can sometimes spoil the festivity, but I have never witnessed big festivals marred by rainstorm. It is said that it happened in America one 4th of July. The rain came and spoiled everything. The next day, certain newspaper ran this headline. The Most Unfourthnate July!

I think neither rain nor storm, nor should heat or cold be allowed to dim the enthusiasm and zeal in celebrating independence days.

Of course, the dancing and merriment cannot be the same in the rain under a clear and starry sky. But, since dancing us outward expression of inner joy, the latter can never be dampened down by rain or hailstorm. At least for the majority.

“Hi, Rajul so you are taking a stroll like everybody else?”

“There is festive mood everywhere; it makes me happy to see smiling faces.”

“Are you watching some of the performances?”

“Yes I think Independence Day is celebrated in a very unique manner in this country.”

“Indeed. Besides don’t forget it is the 25th Anniversary.”

By the way, most of the 14 of July dancers in Paris have only a vague knowledge of the revolution, and if they danced at all, that was because they were programmed to dance on that day. That’s what their ancestors have been doing for the last two centuries.

However, most dancers in Bahti Meskerem or Harnet Avenue know about their revolution first hand. Some had taken part in it and have lost a limb or an eye as a result.

“How do you think they celebrate in Dekemhare or Massawa?

“The same as in here. There may be more facilities and varieties here, but the enthusiasm is same everywhere?”