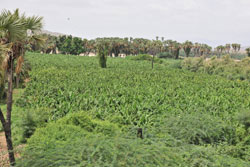 In the past 25 years of independence commendable projects that could have significant contribution in the efforts to ensure food security have been implemented.

Asmara, 27 May 2016- In the past 25 years of independence commendable projects that could have significant contribution in the efforts to ensure food security have been implemented.

The D.G. of the Infrastructural Development in the Ministry of Public Works, Mr. Kidane Berhane indicated that in accordance with the policy of equitable distribution of resources the dams of Toker, gerset, Fanco-Tsimu, Fanco-Rawi, kerkebet, Ali-Gidir, Bademit, Mislom and Logo have been constructed and are contributing in the supply of potable watery and irrigation farming activities.

He further pointed out that water diversion schemes that could cultivate about 14 thousand hectares of land were constructed in the Gash Barka region. He also said that irrigation infrastructure that could a big impact in the agricultural development have been put in place in Hazemo, Ali-Gidir, Gerset, Fesco, Afhimbol and in other areas.

Mr. Kidane further indicated that commendable achievements have been registered in the construction of asphalt and dirt roads and sighted as an example the roads linking Tesenei-Arbate Asher, Massawa-Foro, Aqordet-Bisha, Alebu-Gash as well as the expansion Sigalet Ketan.