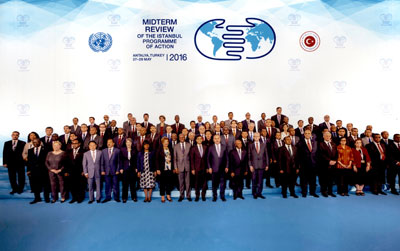 Let me at the outset extend my delegation’s deep appreciation to the People and Government of Turkey for the warm welcome. I also wish to thank the United Nations Office of the High Representative for the Least Developed Countries, Landlocked Developing Countries and Small Island Developing States (UN-OHRLLS) for organizing this event.

Eritrea aligns itself with the statements made by Bangladesh on behalf of the LDCs and Thailand on behalf of the Group of 77 and China.
Four days ago on 24 May, Eritrea celebrated its 25th anniversary of Independence. Eritrea with 1200 kilometers of coastline and more than 350 islands, nine ethnic groups and 50% Christian and 50% Moslem population, located in the strategic Horn of Africa and the Red Sea Region, is enjoying internal peace and social harmony.

Eritrea is working diligently to graduate from LDCs through the implementation of an inclusive, sustainable and poverty eradication development strategy. The Government is fully committed to further consolidate the political, social, economic, cultural development of its people. With grassroots participation approach and dedicated political leadership as well as through effective mobilization of domestic resources and in cooperation with international partners, Eritrea has registered commendable results in the areas of food security and social services.

The main tenet of Eritrea’s development policy is ensuring equitable access to basic social and economic services and opportunities all, so that no Eritrean is left behind. In Eritrea, education is free from kindergarten to tertiary level. This includes the expansion of vocational and technical schools. Remarkable progress has also been achieved in the health services. Today 60% of the Eritrean population enjoys access to health facilities within a radius of 5km while the rest are within 10km radius. Eritrea is one of the few countries that have achieved the Health MDGs, 4, 5 and 6. Eritrea is also declared by WHO, polio and measles free country.

Identifying food security as a national security issue, Eritrea is improving the productive capacity of its agricultural and fisheries sectors. Modern irrigation system is introduced, dams and feeder roads are continuously built. With the potential yield of 80,000 metric tons of fish per year, the fishery sector has become an integral part of the food security program. Eritrea has reduced the proportion of households without access to safe drinking water from 89% in 1993 to 32.5% in 2015.
Climate change concern is an issue that the whole population is engaged. For example, during the summer break, high school students are actively engaged for one month in terracing and afforestation programs.

Given the country’s location in the Horn of Africa and the Red Sea Region, with unpolluted beaches and virgin coral reefs, and its rich historical sites as well as close proximity to the European and Middle Eastern market, tourism is an area the government of Eritrea is making substantial investment. With 60% of the land mass endowed with all types of mineral resources, the mining sector is also expected to contribute significantly for the economic growth of the country. So far more than 17 international companies are operating in Eritrea.

Empowerment of women and mainstreaming gender issues across all sectors is being implemented diligently. Female genital mutilation is criminalized, equal pay for equal work is guaranteed by law, and women are allowed to own property including land. The National Union of Eritrean Women, with more than 300 thousand membership inside and outside the country is the main driving force for the empowerment of women in Eritrea.

In conclusion, Peace and security is an important pillar for the achievement of sustainable development for all countries, in particular to the LDCs. We need to recognize the particular challenges faced by some least developed countries such as Eritrea when we are implementing the Istanbul Program of Action. In the case of Eritrea, Ethiopia’s occupation of its sovereign territory, including the town of Badme, in violation of international law and Eritrean-Ethiopian Boundary Commission (EEBC) final and binding delimitation and demarcation decisions as well as the politically motivated and unjustified UN Security Council sanctions are impeding its effort to ensure inclusive and sustainable development activities.

It is, therefore, high time for the international community to demand Ethiopia to unconditionally withdraw from sovereign Eritrean territory it is occupying. Also in the letter and spirit of 2030 Sustainable Development Goals and Targets, the unjust sanctions imposed on the people of Eritrea on the bases of fabricated allegations that is today proven to be non-existent must be immediately lifted. The motto “No one should be left behind” must be practiced by all of us.