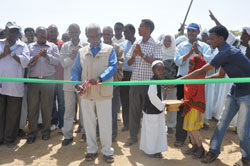 Keren, 01 June 2016- The residents of the Berekentya, Hamelmalo sub-zone have become beneficiaries of potable water supply. The project worth of 3 million Nakfa has become operational from 30 May 2016.

According to Mr. Yakob Idris, Administrator of Halelmalo Sub-zone, the residents and particularly mothers and children used to encounter a great deal of a problem in travelling a long distance from their villages to fetch water and that with the supply of water from their backyard their problem has been alleviated.

Indicating  that all development activities so far implemented are not to be viewed lightly, Mr. Ali Mahmud, Administrator of Anseba region, on his part said that the Government has been giving priority on putting in place social service provision institutions in the remote areas of the country.