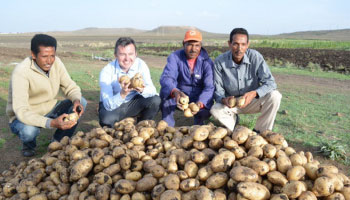 In 1994, Eritrea released the Macro Policy Paper (MPP), articulating a broad national development policy with a special focus on agriculture. Specific points raised in the document include: the need to create of a modern, technologically advanced and competitive agricultural sector; the importance of producing high value agricultural commodities through the development of irrigation and water collection systems; how to better utilize water for irrigated agriculture and new irrigation schemes; and the need to promote research and extension. Since the publication of the MPP, Eritrea has undertaken a series of important steps toward implementation and enactment of tangible, positive change, including the fostering of numerous development-related ties with international partners and organizations.

As an instructive example, consider growing Irish-Eritrean ties. Over the past several years, Ireland and Eritrea have developed an increasingly strong partnership, particularly within the areas of agricultural development and general capacity building. A number of initiatives and projects across Eritrea have involved the participation, inter alia, of Irish Aid, Irish development partner Vita, and Teagasc, the agriculture and food development authority of Ireland, which seeks to support science-based innovation in agriculture and bio economy.

Of note, Irish developmental support to and collaboration with Eritrea have been influential in the distribution of unique fuel-efficient cooking stoves. Significantly, the stoves, which are now utilized by tens of thousands of households across Eritrea, reduce the consumption of wood for fuel by up to 50% (which is absolutely vital for Eritrea, since environmental degradation through deforestation has long been a critical problem), improve ventilation and working conditions, and may prove extremely beneficial toward producing a variety of positive socio-economic development outcomes (e.g. through reducing time spent on searching for wood).

Another key area of Irish- Eritrean cooperation has been in improving potato farming and developing technology underpinning the dairy industry in Eritrea (e.g. research, extension, and capacity building of farmers and marketing). Last year, recently established dairy pilot programmes in Eritrea were found to have produced highly successful results, with a doubling of milk yields. Additionally, Teagasc introduced a world class seed potato, Electra, which can more than double the yield of local varieties.

Notably, although potatoes have historically not been widely cultivated in Africa, nor included in food security discussions, they provide high nutrition and are adaptive to many climates. Moreover, they use less water per nutritional output than many other crops, are high in calories and essential nutrients, and are a great cash crop for small farmers because they can be stored for long periods of time until market prices are favorable.

These multifaceted initiatives by Irish and Eritrean partners are particularly significant to supporting sustainable livelihoods, improving food security, and helping transform the lives of thousands of farmers, families, and communities across Eritrea. Hunger and famine, as convincingly shown through numerous detailed studies by Amartya Sen, the Nobel prize-winning economist, are often not caused by flooding, drought, or other “natural disasters,” but through social, economic, and political conditions. Guaranteeing the right to food requires not only genuine political will, committed leadership, and firm commitments, but also strong support from and collaboration between local communities, international partners, development organizations, and civil society.

Ireland’s cooperation with and support to Eritrea also involves the development of unique drip irrigation schemes, dams, and water collection points, crucial since water is precious in Eritrea; average annual rainfall is only approximately 380mm and farmers have to cope with regular droughts and crop failures. As well, Irish-Eritrean ties extend to efforts to address environmental degradation, a problem dating back to Eritrea’s period under colonialism and foreign administration. Remarkably, due to universal land systems, agricultural expansion, and deforestation policies successively implemented by the Italians, British, and Ethiopians, Eritrea’s national forest cover decreased from 30% in the late 1800s to a meagre 5% of the country by 1960 (Fiore 1952; MoA 1994; Renato 1911). Other influential factors for widespread degradation include the long, destructive war of independence, harsh climatic conditions, and various population practices (such as the mass utilization of wood as fuel for cooking purposes).

Overall, Eritrea’s close partnership with Irish organizations and government institutions is proving extremely beneficial to promoting sustainable livelihoods and establishing a strong agricultural sector, as well as ensuring that Eritreans, in particular the poor and vulnerable, have access to sufficient and nutritious food.

“Over the past 5 years Ireland has committed over 500,000 Euros to projects in Eritrea [in outlays for Irish experts and provision of genetic materials] Mr. Hayes notes: “It is great to get the opportunity to visit Eritrea and see first-hand these programmes in action. I believe that enabling sustainable livelihoods is a critical factor in determining Eritrea’s future.”

“What Irish Aid, Teagasc and Vita are achieving with the Ministry of Agriculture in Eritrea is as far removed from traditional aid models as it is possible to get,” says John Weakliam, VITA CEO. “This is about investment and technology transfer, supporting Eritrean farmers by using the very best of Irish research, agronomy and commercial experience.”

The Minister of Agriculture in Eritrea, Mr. Arefaine Berhe, says “The Ministry of Agriculture of Eritrea believes that the bilateral cooperation with Irish agricultural institutions and development agencies in the areas of agronomy – mainly potato and livestock with special focus on dairy is exemplary, effective and addresses the cardinal issue of productivity at a community level.”

Larry O’Loughlin from Teagasc is accompanying Brian on the trip. He represents his organization firm belief that progressive, smart agriculture will create the level playing field that Eritrean farmers need to thrive. “We have so much expertise and skill in Ireland and in Teagasc we recognise the contribution we can make by combining science, experience and investment. Eritrea, with its wealth of opportunity and a people noted for their work ethos, is a natural development partner for Ireland.”The trip [took] place from May 14 to May 18 and the group [also] met with the enterprising women of Eritrea, over 42,000 of whom have transformed their lives by building the award-winning fuel efficient stove in partnership with the EU, Vita and Gorta Self Help Africa.