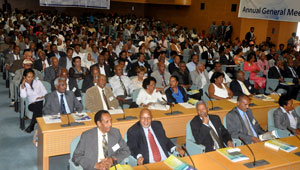 The National Insurance Corporation of Eritrea (NICE) held its 12 regular meeting of shareholders at Hotel Asmara Palace on 4 July.

The Board Chairman at the Corporation Mr. Girmai Gebremeskel, said that the NICE recorded notable growth last year by implementing unassailable strategies and course of actions. He also briefed the participants of the meeting on the general function and activities of the Board.

In an assessment report he presented at the meeting, Mr. Zeru Woldemichael, General Manager of the Corporation, said that the NICE has managed to minimize risks in 2015 compared with that of previous years.  He further pointed out that the Corporation has made 79 million Nakfa profit from the total insurance sales last year that amounted to 272 million Nakfa.

He added that members of the Board passed a recommendation symptomatic of the distribution of 71 million Nakfa of the profits made to stakeholders, which will designate the year, the most profitable for stakeholders in the history of the corporation.

Following extensive discussion on the reports presented by members of the Board and the General Manager, the participants of the meeting reached an understanding to subscribe life insurance from their shares of profits last year.

The participants of the Annual General Meeting included stakeholders from different parts of the world for the nation’s Silver Jubilee Independence Anniversary celebrations.

A Future Abundant of Intellectuals: Eritrean Institutions of Higher Education