A Future Abundant of Intellectuals: Eritrean Institutions of Higher Education 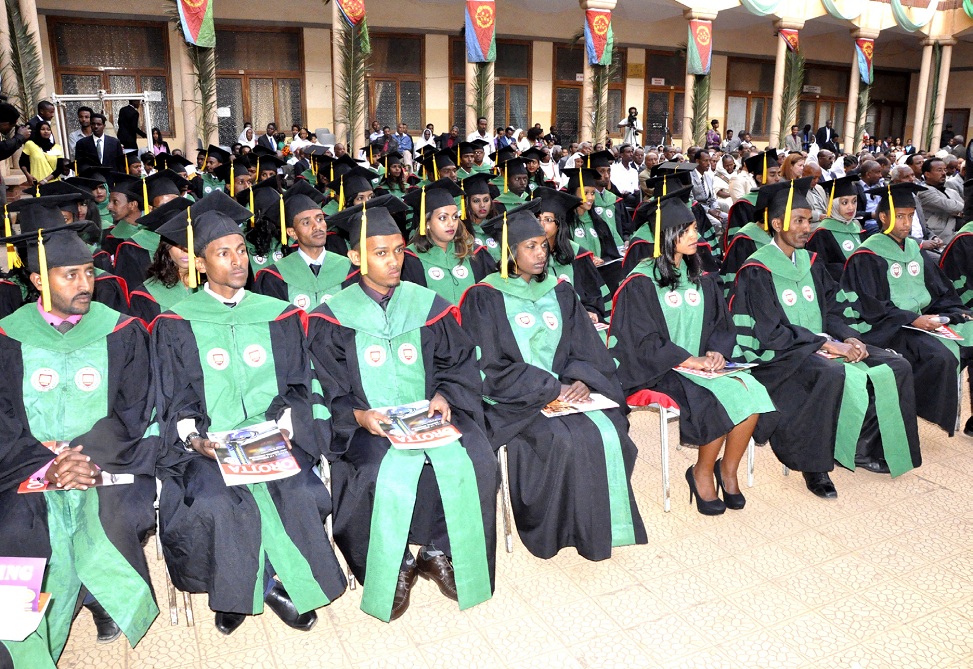 Eritrea has strongly relied on the resource of its people since the first arising steps of its history. With the passing of each day like ever and more than ever, the people and Government of Eritrea to the best of its capacity, strives in supplementing buoyant grounds for a future full of young elite intellectuals assisting the national development to prosperity.

As such, with the dawn of independence in 1991, education became one of the major domains, where a great deal of focus and massive investment was made on. With big investments, collaborations and contributions of different parties, at the moment, more than 14,000 young Eritrean students have become beneficiaries of pursuing their studies at higher level of education in the nine colleges nation wide.

Only 12 years ago, there was one university in Eritrea, the University of Asmara (UoA), originally established in 1958 by Italian missionaries. With its very limited capacity, the university accommodated 1,200 students on the highest record of its history.

The incessant will of the Eritrean people and government to improve higher education augmented with the increasing number of students. As a result, major activities for expanding the University of Asmara to nine colleges countrywide was put in action.

With the advent of these Institutions of Higher Education nationwide, notions such as exchange of ideas amongst students while amplifying their knowledge through theoretical and practical schooling, started owning to tangible and successful form rapidly.

These seven Institutions of Higher Education are: the Eritrea Institute of Technology (EIT), in Mai Nefhi area embracing three colleges: College of Education, College of Engineering and Technology as well as the College of Science. There is also the Hamelmalo Agricultural College (HAC), in efficient fact situated in the Hamelmalo area, one of the most verdant zones of the country.

For health and health related studies, there is the Asmara College of Health Sciences (ACHS), graduating a number of health professionals every year. There is a second one with the same purpose and promising outcomes too: the Orotta School of Medicine and Dental Medicine (OSM&DM). They both are located in Asmara.

The beautiful port city of Massawa on the Red Sea coast line, is home to the College of Marine Sciences and Technology (COMSAT).

Money matters, economics, financial equations, numbers, graphs, rules and much more is provided to future exceptional economists at the Halhale College of Business and Economics, in Halhale.

Last but not least, in one of the ancient historic areas of Eritrea, Adi Keyih, there is the College of Arts and Social Sciences (CASS).

Since their establishment, Eritrean colleges have been gaining more attention from students. As a matter of fact, official scale of the National Commission for Higher Education (NCHE) shows that enrolment of students increased greatly. At the very moment, more than 14,000 are studying in higher institutions at degree and diploma level. Education in Eritrea is free. Undeniably, this stands as a chief paradigm of the Eritrean higher education’s root policy; with impulses of germane higher education system of quality and sustainability, amplified by continuous committed effort invested in enhancing the eminence of educational edification they offer, to which every national has rightful access to, in equity without any discrimination.

The government has applied major investments, in association with collaborators such as the African Development Bank, in the expansion of infrastructure to accommodate fineness in teaching, research and public services. Internal and external linkages have been made possible to strengthen partnership of versatile nature not only with governmental and non-governmental organizations and associations of the country, but also several international entities.

According to data from the NCHE, students’ performance can be labeled as ‘Good Standing’, with the most recent scale of graduates 81.7% in degree and 74.1% in diploma, while the attrition average rate is of reaching 8.0 % for degree students and 13.0% for diploma students. Of course, this is not being seen lightly so Institutions of Higher Education along with NCHE is operational in reducing the rate of attrition.

In fact, with the aim of supporting Eritrean Institutions of Higher Education, recently, the Eritrean Research Fund (ERF) was founded with now an overall number of 42 research projects being funded by the ERF; 19 of which have been already seen to completion. NCHE promises that there will be more ground for such researches pertinent to development, environmental issues, energy, technological renovations and advancements, health, culture and agriculture amongst many others. Surely, this is a reflection of the NCHE policy in supporting student’s creativity and academic freedom.

In Eritrea, a young country of only 25 years of independence and little more than ten years with self-realized Institutions of Higher Education, at the moment, in all of the nine colleges, 99 courses are present. Three of which are of PhD level, 9 of Masters, three MD specialization courses, 53 of first degree and 43 of diploma level courses and the very first Masters program in Geo-informatics launched just this year, which for the moment is including graduate assistants (GAs).

Needless to say, this would be too small to sum up everything that the people and Government of Eritrea and especially the Ministry of Education realized in the past 25 years based on almost nothing but ambition and a vision of a country which largely relies on its human resource.

With the aim of intensifying a population equipped with the necessary skills, comprehension and educational ethos for a self-reliant society, the Eritrean people and government, targets to fight poverty, ignorance and backwardness while marching towards an all sided conscious development.

It is certainly not an easy task, and still, though, some shortages might appear on the way the Institutions of Higher Education, NCHE and Ministry of Education at large, keeps working on upholding instigating principal essence of equity and quality education to its most efficient manifestation!

Challenging Assumptions: A Note on Recent Coverage of Eritrea