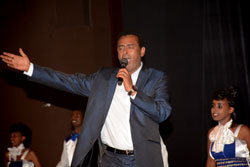 Whenever I look back to the time where I was not part of, but have heard so much that I feel I was there, I empathize with my people. I sense their suffering and at the same time I admire the hard but fruitful struggle they faced to achieve Independence. Especially, the stories of the armed struggle and the heroic deeds of the freedom fighters never fail to inspire and make me proud.

As a result, since the day I started writing, I’ve been searching for the right words and expressions that can express my gratitude towards all freedom fighters. But, for a reason I don’t understand yet, I have never written any piece that shares half of what I wanted to portray.

I have always thought, if man is the best creation of God then music is the best creation of man. What speeches and articles cannot do, the magic of music can do easily and naturally. Music, not only touches the heart but also moves the soul and stir deep down emotions. And this proofed to be true in the past weeks. I have found a great song which utters the sounds of my heart and say it all beautifully: Aklilu Foto (Tefono)’s new single “K’bret Yhabeley” or thank you.

While Tefono was presenting his song, in one of the cultural shows held on the occasion of Eritrea’s silver jubilee anniversary independence at Cinema Roma, I was there among the multitudes shouting their joy, clapping to show support, even some of the crowd stood by the stage and never stopped waving their hands in the air until the end of the song. Every one of us was moved, filled with happiness and nostalgia.

The song, as its title indicates, expresses gratitude to all freedom fighters for their great do’s and the colorful sacrifices they made to achieve our independence. It emphasizes the role of freedom fighters (Tegadelti) on creating the moment we are living now. Listening to this song not only made me overjoyed but reminded me to look back and think over the important role they played.

Back in the years of the struggle, every youngster who joined the struggle surely had his/her own dreams, goals to accomplish, and families to take care of, among long list of other personal needs. But they put aside their personal desires and responsibilities, for the bigger national dream: Freedom! While struggling, they never feared for their lives, never felt sorry for the opportunities they were losing and the irreplaceable young age they were spending, for they had already endowed it, for the greater good of their people and the coming generations. They loved their people and country more than their lives. As presented in some part of the lyrics “bestowing your opportunities you have created mine”, they indeed be gifted their golden times for us to have one.

In addition, to all freedom fighters contributions and sacrifices, many women fighters have made an extra unique sacrifice. Afraid of losing a chance in joining the battle field and add a burden to their comrades, they refused to have children and lost once and for all their natural time to bear a child, let along children. As a girl, I can easily imagine how hard that choice must have been to make. I can also feel, the emotions of loneliness and the void of having their own child. But they heroically paid that price. The song succeeded in expressing these profoundly.

Not only does the song expresses gratitude but also reminds us, how valuable remembering the past is in order to enjoy the present, and treat it with the respect it deserves. And most of all to remember those who paid their only and irreplaceable lives to make Independence possible.

Though the song’s beauty was enough for me to be satisfied, the very idea of a freedom fighter singing such a song fascinates me most. Tefono himself joined the armed struggle in 1976 and after completing his military training joined brigade 70 and took part in many battles, including, the battle of Keren, Adi Hawesha, Massawa (battle of Salina 1977) and more, until he was transferred to ‘Maekelay Bahli’, the EPLF cultural troupe, in 1981 and served as a singer-songwriter and musician until the days of independence.

During these times, he produced very memorable songs which stood the long period of time and still are played to this day. Same as every freedom fighter, he endured the struggle, he fought, was wounded several times during battles, and together with his fellow artists made wonderful artistic contribution in creating songs of resistance. And this is why I was fascinated by the song he chooses to sing.

Although I know artists don’t usually represent their feelings and express themselves only, and the first two lines of the first stanza of the song explains it all, I was curious enough to find Tefono and ask why he decided to choose the theme of his song. When I did, he humbly answered:

I never grew up with my brothers and sisters. I Hope not to make them angry, but the love I have for my comrades is much greater than theirs. My comrades are my family, the ones who shared the ups and downs of the struggle with me. The ones who laughed and shade tears with me at moments when the pain caused due to the loss of loved comrades become unbearable. They are the ones who took extra care of me while I was in the front (hailetat) and still they all love, respect and care for me like the old times. So, I respect them greatly.

Who else would deserves my respect if not them? I never fail to express my respect and love to them in all my songs. Symbolic or direct, all my songs are about them and for them. No one can be loved and respected more than those who care and love our country. Since these are my only true feelings towards them, I shared my ideas with Hailemichael Haileselassie (lingo), he wrote me this lyrics, and I wanted to thank him for that.

In addition to the impact his song has on me, his response inspired me more, and deep down I felt my love and, respect to all fighters, grew even stronger. To sum up, the song, with its touching lyrics, sensational melody and of course angelic voice of the singer, is a wonderful contribution for expressing the appreciation that all freedom fighters deserve.

“The Melody of Music can speak for itself”