“No restrictions in terms of who, when and where to speak to” 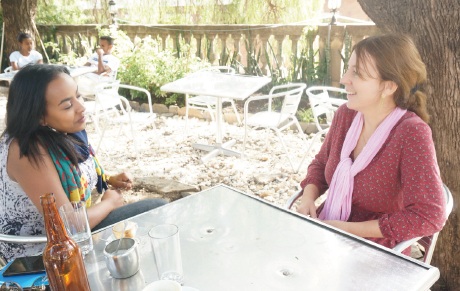 The long standing not so pleasant narratives of Eritrea in mainstream media are often revived by visiting journalists, however, around this time, there seems to be signs of more nuanced reporting and among the few is our guest today, who’s being reporting and documenting from Eritrea for the past two weeks.
We give you Mary Harper from London, Africa Editor for BBC World News.

I am quite certain that at times you came across not so pretty answers.

Yes. There was a mixture, and I believe I had honest answers from different point of views. To most people, we did introduce ourselves and told them that we are from the BBC, and we politely asked them to talk to us. And these were people that had no idea that we were coming here, clueless of what we were doing and nobody knew our plans as we had nobody accompanying us, it was just me and my cameraman. We didn’t have any official coming with us and as such people, almost in every place we went, they agreed to speak to us and mostly gave a positive image of Eritrea while at the same time indicating some of the challenges the country faces, particularly with regards to economic aspects.
So it has been a range of views but I noticed that people are very positive and highly proud of Eritrea.

No, absolutely not. I suppose in the way I do my journalism, I avoid starting with prewritten stories so I prefer to speak as many people as possible from all age groups; men, women and children even if they want to talk to me. And many children in fact wanted to talk to me during the celebrations.

I interviewed a great range of people; I spoke to the youth and people from the diaspora that came back for the holidays of Independence celebrations, and a number of diaspora that came back to Eritrea for good to stay, live and work here. I spoke almost with everyone, from ordinary people, to ministers and seniors in government posts.

Many foreign journalists that pay a visit to Eritrea insist that they have a ‘government minder’ overseeing them. Did you have similar thoughts or experiences?

If that is the only way a journalist can work, and I had the same experience one time in Sudan, you have to say it straight out… if there is someone from the government minding you in many ways I prefer not to work under such circumstances.

On the other hand here, I have been very encouraged and relieved not to have anybody with me in this trip or the trip before. I have been able to organize my day how I wanted to. Normally when you go to a country to report, you’d have a local journalist called a ‘fixer’ helping you around, whereas here it has been just me and the camera man. I had to be the fixer and arrange everything by my own… luckily I was here before. So generally I have been very free.

Most of the time, my cameraman and I were on our own, we would go around and collect information randomly without a prearranged tour guide. It was difficult but full of surprises, and I think that is what we call honest journalism.

So you did go outside of Asmara?

I actually went to different places such as Keren, Bisha and small villages and towns.

I noticed that housing is encouraged in the country as I saw new building blocks in Massawa for example and even in rural areas. Furthermore, I saw the huge investment in farming and agriculture and many attempts to encourage farmers. I admire that rural communities are not abandoned; I saw many schools, and even in the smallest community there must be at least one school.

All in all, I get the feeling that in Eritrea despite many difficulties there is a sense of eliminating partiality when it comes to growth. As a matter of fact the gap between the rich and the poor here is so little, so unnoticeable. While let alone in Africa but even in Europe that is a problem that I don’t see much of here. For example in Angola, there is plenty of resources but the wealth is in the hands of few billionaires, and it’s upsetting.

Your country’s ideal is admirable.

What is the general idea that you have now of this specific trip?

That is a difficult question to answer. But of course Eritrea like every other country is very complex. This is only my second visit, so I am a new comer here even though I am an experienced journalist in terms of reporting on Africa.

However, Eritrea is a totally unique experience for me; it is distinctive for the reason that it is the only country of which, what is told of on social networks, is much different from its reality.

As a matter of fact, before my first visit in March, I read reports in addition to everything I could find about Eritrea. Most of which were reports by human right groups, COI along with other UN reports coupled with some media reports, and they were all overwhelmingly talking harsh of Eritrea.

According to those reports Eritrea is a place empty of its youth, were its people are tortured and are all in prison. All the more so, there was a report on people being forbidden to think let alone to speak. So when I came here I realized that of course Eritrea has its own problems but it has many more stories that could be told outside all of the negativity.

Moreover, I have not been restricted in terms of who, when and where to speak to; I have been both in rural and urban areas, and I would say that even though Eritrea is being accused of many bad things, in a way, I would say that Eritrea has its own way of doing things in determination and resilience.

And I do find it strange that some in the international community have chosen Eritrea, sort of picked it out, as an easy target. Lots and lots of other African countries in which human rights abuses are far worst, they really are not focused on in the same way. And I am confused, very confused about it. I can’t understand why Eritrea and its one very repetitive story of abuses.

Is there a story that you would tell right away of Eritrea based on your experience?

I suppose that a story would be of how before I came here most of the reports that I saw or read, talked about people not wanting to speak to journalists, but I was surprised as almost every single one was willing to talk to us. I was even more surprised because we were filming too, and filming is aggressive and intimidating, but people agreed either ways and were happy to talk, and that was definitely unexpected.

Another story is that, if you compare Asmara to the other capitals of Africa, the ones I know anyway, Asmara is incredibly clean and very safe day or night. My cameraman was astonished when we saw children and women out for their walks in the evenings at 11 or 12 walking home without no fear and that is very unusual!

What astonished me is Asmara’s incredible architecture. Other African capitals has skyscrapers going up everywhere and of course places have to move on but there must be a sustainable way. Hence, I find Asmara astonishing and unique, I hope it keeps this unique trait protected, and be a touristic revenue in the future.

And one final story that I would  tell right away, is one of the policy. From what I understand Eritrea has the policy of an evenly balanced development; I have seen how many things are being outside of the main cities. Therefore, instead of having the few cities extremely advanced while totally forgetting of the rural area, in Eritrea; growth is well distributed, which is rare in other African countries.

Eritrea just came about from celebrating its Independence Silver Jubilee, can you tell me how did you find the celebrations?

The atmosphere … It was a mixture, of Eritreans being happy and reminiscing of the fact that Eritrea has been independent for less time than the length of time they had to be in war for its independence. I realized that nobody is forgetting any of it.

The exhibition depicting Eritrean history at the Expo Hall and it was incredibly powerful. I loved the history and remembrance, you all have got it so serious and heavyhearted because several thousands died for your independence.

So combining such opposite feelings; commemoration with joy, at the same time is truly overwhelming and powerful. I sensed sensitive balance in the Eritrean society.

I started off 20 years ago as a journalist in BBC and BBC has been extremely helpful to me in having a certain value to what I do.

I know BBC heavily criticized Eritrea but it is your job to promote the fair and real image of you. So be accurate and never forget to do attributes, you always have to say x said x about x. This helps to make sure to protect yourself, because you can’t avoid confrontations. Secondly, be balanced and give us as many views as possible and defend yourself and your thoughts, be humane.

Not overly emotional or irrational, but thoughtful and fair towards other even though we have to keep our distance. And finally be interesting! If you base your journalism on such principles you should be able to do your work without fear or favor.

And I think that this is the best way for the story of Eritrea to be told on its most original form… for young journalist to tell their country’s stories. Sort of in a crafted way, I don’t mean to be misunderstood when I say crafted we’re not talking of inventing, rather making your stories interesting and winning the attention and responsiveness of the global community.

Eritrea has a serious image problem, but if you work in the best of your abilities, beyond your humble and modest tradition of not bragging on your own, you will definitely be able to portray factual and progressive images of you.

Challenging Assumptions: A Note on Recent Coverage of Eritrea