“The Melody of Music can speak for itself” 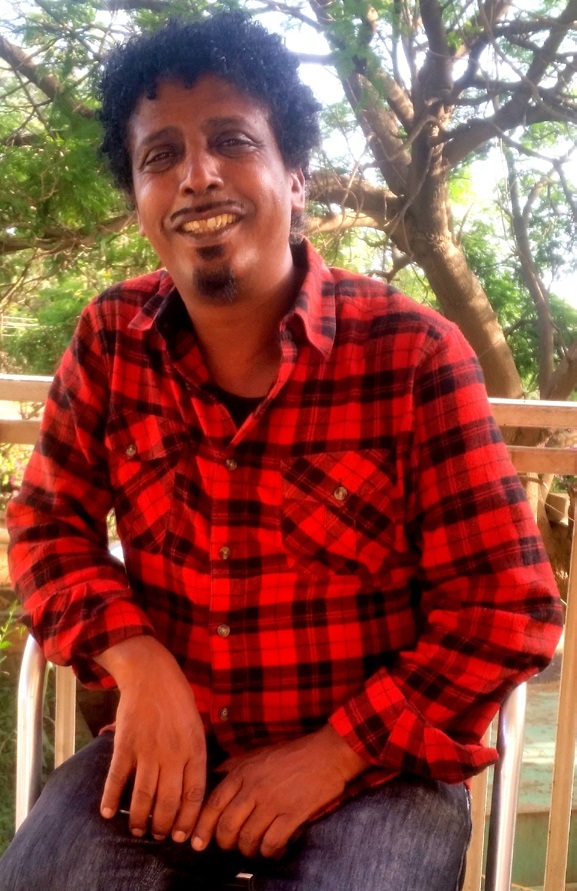 Today one of the legendary and admired artists of Eritrea Mulugeta Beyien (aka Wedi Zagir, he is a musical legend that created magical harmonies ever since his freedom fighter days; as soon as he joined the armed struggle for liberation.
His very famous song released on the instance of independence in 1991 has become the logo of his music. Also his very latest “A quarter century child” which he sang at the 25th Independence celebration on the May 24th in the Bahti Meskerem square.

Tell us a little bit of your background?

My name is Mulugeta Beyien known as Wedi Zagir. In 1977 I learned to play the “Kirar”, in 1978 I wrote song lyrics for myself and many other singers and also worked as dancer and keyboardist up until the independence in 1991. Currently, I am proceeding on writing new lyrics for more songs.

What about your singing experience during the armed struggle?

Singing in those times was not an easy task because we’d start with little or no musical background. For me, it started there and then. It demanded hard work. We used work on songs reflecting the spirit of the struggle. We believed that we were going to make possible even the impossible, our mind strength was just beyond normal… and now looking back we even are astonished by our own achievements, sometimes find it hard to believe it.

What is the significance you attribute to music?

Its massive power of bringing people together. If we take our society for instance we are nine ethnic groups, yet we have a harmonious culture that brings us together. Ever since the armed struggle we Eritreans have the feeling of identity and nationalism that brought a common attitude. If something results into a common understanding the only difference remains to be language. I was in Nakfa performing in the past four days. The people of Nakfa are from the Tigre ethnicity but were enjoying our concerts equally with the Tigrigna population among them. They might have not understood what the lyrics were about but with the beats they were dancing to the rhythm despite the differences in both ethnicities. So yes music is indeed a source of peace.

How did you feel to sing your 1991 song, “Tsehayna Beriqa” at the city park concert during the eve of the 25th?

Well it was hard for me to put what I felt in words. To see my work be part of history’s archive and to come back again after 25 years and sing in the same occasion and location is beyond compare.

Well, my first CD came out in 1999, and I gave a song for a social occasion once. I released a song during the TPLF war of aggression, called “Zekreny” meaning “Remember me”, and I also contributed one for the 20th independence anniversary called “Hilmey Hilmikhi” meaning “My Dream is Yours”, and the new one you just heard on May 24th.

I called it “Qol’a Rib’ei Zemen” or the “A quarter century child”, because there is a way of saying that age is wealth and you come to see things you would never imagine before. In most honesty, back in fields, my compatriots and I didn’t think we’d see the independence let alone the Silver Jubilee. We were ready to sacrifice ourselves for a better future for Eritrea’s youngsters. And I never thought I would live this long.

So with that song I stress on the fact that Eritrea is a child of a quarter century because it was only born in the recent past. As I wrote the song  I envisioned what our nation passed through both post and pre liberation. So in the song I speak about the struggle for independence and the effort in nation building within 25 years. It is my way of telling my country that it had passed the worst and the yet to come is definitely going to be much more simple as its people remained unbelievably resilient in the past years of independence.

What is your opinion about nowadays songs?

We have many great modern artists and producers. When it comes to the originality of the songs and music the old definitely overthrew the modern with its purity and the fact that it is not technologically mixed. One little bother for me is the monotony of similar beats and rhythm of the melodies. However I do stand optimistic because what seems unpleasant to hear, through time it might gain acceptance, the same case of many songs that were rather rejected by contemporaneous people, but highly regarded by later generations… the production of songs is like wine when it ages it tastes better. Needless to say every artistic production has a value and accolades during their time of release, be it in the old times or now, and to that we must take the time to appreciate before we judge.

To me “Kirar” is the best musical instrument I have ever encountered. We can use it to play a whole song. It is an instrument in which the musician has access to full control over the rhythm. On the other hand it can do what other instruments like the guitar can’t do: playing both rhythm and melody. Some people of the new generation fail to see its value because it’s an antique cultural instrument, they tend to miss the fact that it is an Eritrean instrument made from Eritrean culture and is our archetypal identity. Therefore to watch people cease to put it in use, sadness me deeply and I am urged to do more to refresh its role in music.

Since it’s my first time being on Eritrea Profile’s pages it gives me great pleasure and honor. I think art in general is not an easy task, for there are a lot of great artists, legendries that deserve the opportunity to be given the coverage I was given. So thank you for that. I also want to remind media outlets to encourage new artists, as it can prompt them to be a highly contributors in enhancing Eritrean culture artistically, while at the same time preserving traditional traits as to pass them down to generations.

I am pleased to see younger generations prospering and becoming industrious, it is a golden opportunity for me to see the big steps our youngsters are taking not only in music but different aspects. It’s a feeling beyond compare!