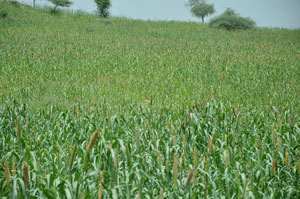 Maize (Zea mays) also called as efun in Eritrea is an important cereal crop belonging to the family Poaceae. It contains both corneous and soft starch 61 per cent with high content of essential amino acids. Corn kernel contains 13.5 per cent moisture, 10 per cent crude protein, 4.3 per cent oil and 70.3 per cent carbohydrate. It has a great potential for efficient input use, crop diversification, foreign exchange earnings and greater employment generation through agro- industries and food security especially popcorn.

In Eritrea, the grains of this crop are used as an excellent source of human diet in the form local foods (Bread), Ferment of maize (bukil), boiled maize (Tutuko), Roasted maize (Colo), local beverages (Suwa) and industrial products (alcohol, citric and lactic acid). Inner portion of the cob after removal of grains are used as fuel and as a source of charcoal. The green or dry Stover is used as livestock feed in the form of forage or silage mixed with some nitrogen and urea fermented for making it digested. In addition to these the extracted starch, sugar and oils from grains can also be used for manufacturing syrup, soap, and beer and whisky.

Maize has the highest production potential among the cultivated field crops and is known as “queen of cereals”. In Eritrea it ranks 5th in area followed to sorghum, pearl millet, barley and wheat covering an area of 19,621 hectares with annual production of 29,053 tones and average productivity of 1480.7kg/ha. The average productivity of maize in Eritrea is much less than that of Africa (1605kg/ha) and that of world (4472kg/ha). Since it is being produced on marginal lands of highlands of Eritrea, the production is also not sufficient to meet demand of all the consumers. Even though most of the small-scale farmers do not obtain adequate maize production to meet their household needs, they still sell part of the lack of high yielding varieties, moisture stress at critical stages of growth due to low and erratic rainfall, inappropriate tillage and sowing system, low soil fertility, competition by weeds and non-availability of the fertilizer and pesticides to the farmers at appropriate time. Therefore based upon field experiments conducted by the authors under semiarid conditions of Hamelmalo Agricultural collage and elsewhere, the following agro-techniques are suggested to be adopted by the farmers to increase the productivity of maize in Eritrea.

In semi-arid region (SAR), rainfall has extreme temporal and spatial variability and generally occurs as storms of high rainfall intensity, resulting in agricultural droughts and intra-seasonal dry spells (ISDS) that reduces the yield of rainfall crops. Rain fed agriculture in Eritrea is becoming increasingly unreliable due to erratic nature and meager amount of rainfall. Sometimes the rainy season starts early in the month of June and stops at the end of August or in the beginning of September when the crop is still at its stage of peak soil water requirement as a result yield potential is highly reduced. Sometimes, rainfall starts late until seedling become irrecoverable due to water stress. All these have a permanent impact on crop production potential. Method of moisture conservation like tied ridge, open ridge and flat methods under compartmental bunding if adopted by the farmers can help to collect, Infiltrate and retains the runoff rain water.

Tied-ridging also known as boxed-ridges, furrow damming, basin listing, basin tillage and micro basin tillage. In this method, ridge and furrows are blocked with earth ties spaced at fixed distance apart to form a series of micro catchment basins in the field. The created basins catch and hold rain water, minimalizing surface runoff, improve down ward infiltration of water. The aim of this method is no longer just erosion control but also rainwater harvesting. The aim in such cases is to ‘harvest’ the limited rainwater and store it in the maize root zone for use during dry spell periods. In a wet year, tied-ridging can result in water logging which can be checked by draining the water at furrow ends as per slope.

Table 1.Effect of Moisture conservation methods on the moisture per cent in the soil, grain yield and

However, more benefits can be expected under low and erratic distribution of rainfall. Therefore farmers may adopt tied ridge method for more conservation of rain water and getting higher productivity of maize.

Maize varieties differ in their leaf area, rooting pattern, maturity duration and their resistance to moisture stress conditions The hybrid or composite maize varieties yield higher than the local land races as they have more photosynthetic efficiency; more response to the conserved moisture and fertilizers and are resistant to lodging and attack of insect pests and diseases. The study conducted by the authors at Hamelmalo Agricultural College during 2015 and by others during 2013 have clearly indicated higher grain and Strove yield of 04sdve hybrid variety over the early local variety (Table 2).

Hybrid variety 04sadve produced significantly highest grain yield over local variety because of its genetic potential which helped it to utilize available moisture and light more efficiently and thus producing higher number of grain per cob, number of grain and grain weight per cob, 1000 seed weight and grain yield. Farmers can select and keep the seed of composites from their every year but has to purchase the seed of hybrid variety every year from the seed companies.

Time and method of sowing

Fields should be ploughed and harrowed with the receipt of per-monsoon showers in mid of June and mix Farm yard manure at the rate of 20 tons per hectare in the soil. The sowing should be done by end of June or first week of July by keeping row to row spacing of 75cm and plant to plant spacing of 15cm. The study conducted by the authors at HAC during the year 2015 indicated that irrespective of the maize varieties Sown at 75cm row spacing, variation in plant to plant spacing influenced the grain and Stover yield of maize. The perusal of data presented in (Table 3) indicates that 15cm plant spacing resulted in significantly highest grain and strove yield over 25cm and 35cm plant to plant spacing due to less mutual competition for available nutrients, moisture, space and light. The study indicated maize should be sown by keeping 75cm spacing between rows and 15cm spacing between two plants in a row for better utilization of resources under semi-arid tropics.

Dry land soils are not only thirsty but also hungry. Therefore balanced nutrition play an important role in increasing the productivity of maize. Incorporation of farm yard manure at 10 tons per hectare in the soil before sowing helps not only in providing balanced nutrition to the maize crop but also improves the physical properties of the soil to conserve soil moisture. In addition to this drill 100kg DAP in rows at the time of sowing. In case of good rains top dress urea at 100kg/ha along the maize rows at knee high stages of the crop.

Weed wage a hidden war against the maize crop for nutrients, moisture, light and space by competition and allopathic effects causing 50-70 per cent reduction in productivity of maize. Therefore they should be managed by hand weeding in initial 20 days after sowing and by inter cultivation or second hand weeding one month after the first hand weeding. In case atrazine herbicide is available apply it @ 0.75 kg/ha immediately after sowing of the crop. It will check the emergence of most of the weeds and improve the growth and development of crop. In case the maize is intercropped with legume crops apply pendimethalin @ 1.5 kg/ha as per-emergence in place of atrazing.

As maize crop is highly sensitive to water logging, drain out the excess water in case of heavy rains. On the other hand if the long dry spell persists at tasseling or silking stages of the crop apply lifesaving irrigation, if available and check loss of water through evaporation by applying some mulching materials.

Harvest the crop when outer coverage of the cob turns brown and silks completely even when the plants re green. Sundry the harvested plants for few days before decobing. Shell the grain from the cob.