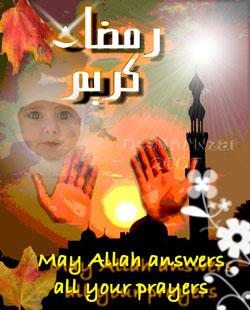 Religion is a system of life to many societies. Religion is something people rely upon as they go through their life. Many societies in the world practice different religions that their faiths in their communities respect, live and die for. Religion is simply a big part of people’s agenda where they focus in and worship insistently with their full heart and depend solely on their super natural phenomenon. Within a religion many pillars and commandments form the whole picture. Stating clearly, many do’s and don’ts create the soul of the religion. Hence it is time for the Islamic calendar to start the prodigious month of Ramadan, where the Muslim community throughout the world fasts for a span of a month.

Ramadan being the 9th month of the Islamic calendar is treated as a month of fasting. The ruling of the Islamic sharia indicates anyone who has reached the age of puberty and with a good mental health can fast this month of Ramadan, which is one of the main pillars in Islam.

Ramadan in Eritrea is being continuing in a sunny season, hot days and nights this time of the year. In my early teenage years, I used to refuse getting up from the bed at times of Suhur (a meal before dawn) because of severe cold. And in the day time, I was in the Quran recitation school and in the late afternoon, I used to go to the pitch with friends playing some football, while still fasting. But this year No!

Every year the starting day of fasting Ramadan is dragged back minimum ten days from the previous year according to the Islamic Lunar Calendar. This clearly is going to lead the Muslims and Christians to fast their respective fasting months on the same days in no later than couple of years.

I correctly remember that when Ramadan enters, the Muslim mothers and sisters make their ways into the kitchen, usually after 4pm, to prepare various dishes for the family to break their fasting when the sun sets. Not only that my mom used to send Meqlil and Sambusa for the neighboring houses every night, while we, the children, insist on taking to our friends. Day by day, the routine continues until everyone close and near to us have a taste of these foods we entertain for Futur (breaking the fast). The children in the family also hurry for the Sambusas and the sweets that are presented afterwards, especially when there are no guests. But if some guests showed up, regardless from where, we would look disciplined and polite to stare and count how much of the sweets left before dinner.

The first time we were in Sawa for our 12th grade education, I witnessed compassion from friends. I had to fast the Ramadan two weeks after we arrived in the place. The very first day of fasting, right at 2 o’clock and the sun is overhead, our Sergeant ordered we ought to travel around an hour journey to dig some holes for Lemon trees (Sawa is well-known for such trees). I managed to complete the journey but I couldn’t participate in digging since I was tired and too much starved, and didn’t want to be noticed by the Sergeant and my friends telling me to rest below the trees and they will do the task all by themselves. After all, time permitted us to leave to our house that I barely lifted a shovel. You can see in the acts and manners of your colleagues and friends towards the person who is fasting. They treat him well and don’t want him to get tired or take advantage upon. That is the sincere support that can be witnessed in every community of the society.

Today is the sixth day since Ramadan began and the Muslims fasting. This year’s Ramadan was surprising, when people were waiting the day to be started on Tuesday while turned out to be on Monday. You might wonder how this works year after year. Well… let me say something on how this day and others are decided. We at least know that the day of Ramadan is decided on the sighting of the moon. God made the sighting of the moon after its disappearance at the end of the month the sign of the beginning of the new lunar month and the end of the previous month. Thus the texts of the Quran and Sunnah (voluntary actions followed or performed),  make the actual sighting of the new moon the signal for the Muslims to start fasting Ramadan and stop when they see the new moon of Shawwal (next month after Ramadan in Islamic calendar), other dates as well are similarly determined.

At our early ages, we were advised by our parents to start and practice fasting so as to take part of the great rewards. I recall back in the days when I was refused to fast a whole day but insisted to do it and did it actually, unlike my younger sisters who were fooled in this days that they will be accepted if they can only fast until noon.  Despite my stubbornness to insist on fasting, one day I broke the fast by lollipops just before the fast breaking hours forgetting it was fasting days.

If one asked to mention a famous poor man who used to outshine and act as an all-time reminder of supplications, nobody would miss but tell you it is Ferejet. The late Ferejet was a pious old man who travelled all over the city all the times. This man had nobody in his side, yet he had spread various invocations in his time. He used to loudly utter “Ya Allah Ya Afu”, begging for God to forgive his sins on every step of the city he ever walked, and every kid repeating after him on the streets.  He reminds of the fast breaking hours to those who have been fasting the day, he asks something to eat (like Sambusa and Temri or Dates) to break his, he consoles the poor like him to trust in God, he keeps on reminding the rich to aid the poor, and he guides the wrong doer to cease wrong acts on his way. He did all of his efforts without a rest, from the early morning till the sunsets. He was a remarkable old man everyone recalls well.

Fasting remains to be an overall concept, where according to Islamic rulings one prevents himself from taking in what he likes and throwing out what is considered disliked. When one fasts, in the fasting hours his eyes, his nose, his mouth, his tongue, his ears, and hands…fast. Simply the entire body functions otherwise, unlike the other days. The modesty and discipline has to be reflected and respected in this month of Ramadan for the reason of Istimsak (Arabic term for ‘abstinence’).

It is a period when a disintegrated family comes in one table and share love. It is a period where someone supports the other, the rich to the poor and even the poor to the poorer than him. It is a time where one and all from children to young and old people become happy about. The children for the foods and drinks long as they are not well aware about the rulings of the month, and the matured people to get the utmost benefit.

Considering the infinity rewards this Ramadan holds, Muslims find themselves at their best in this month to attain as much as they can get of the countless benefits. Ramadan in our country has a boundless memory, and it will always continue to create one because it has become a bridge to the society’s solid unity and threat to the possible despairs that has and would come through time for long. Let it be a month we all are showered with blessings of the Kareem Ramadan.