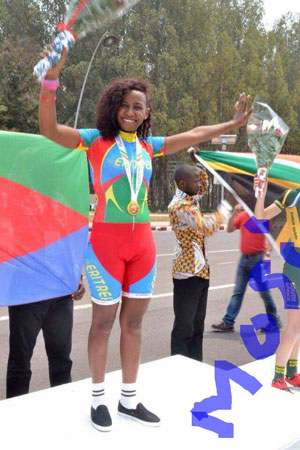 We talk today, to Mosana Debessai, a professional Eritrean cyclist. She is a sports star, which recently started shining, even though she has a long history in cycling despite her young age. She is known for bringing medals from international races, such as from the All African Games. Mosana Debessai is now riding for team Arag, a relatively new team, which has constructed a good reputation for itself with its many glories on local games.

‘Lady Luck’ was little assisting at first; but despite injuries, challenges of all kinds and more obstacles, young Mosana never questioned the fact that she was born to rock in pedaling her way to the top. Moreover she is also assertive and most certain of the fact that her fellow sports women cyclist, can make history if opportunities are provided to them.  “Sometimes even more than male riders” she says. Let’s see why and how.

I was born in 1994 in Asmara. My mother passed away when I was nine years old, so my family and I, moved to the countryside ever since. We grew up in a small village called Tseazega. My father took on farming, my brothers and I did our part in contributing in our household’s matters. We have a big house in the village and I, myself even, am impressed how my siblings beside our father built that house with our own bare hands. It took us years but we made it.

Determination, strength of mind and will power… are the things we learned growing up without a mother, a single father that encouraged us to pursue our dreams. In fact I am the youngest sister of Firekalsi Debesai, Mekseb Debesai (riding for Dimension Data) and Kindishih Debesai; all three great cyclist and, exclusively my sports hero.

-Since you come from a family of renowned cyclists, does that mean you had their support from the start?

Now that I have proved myself, yes I do have their support, but it was not always so. Women cycling is not that hot in Eritrea, as it is as men’s cycling. Sponsorship, promotion, funding, and training on international arenas… they have it all. And even fans: they have more fans than we do, but this one is a global problem. Other than that, I believe that much energy and resources are invested on men sports.

In my case, since my older brothers had prior involvement in the field, they knew that sports are a lot harder for women, as such they pushed me to just focus on my studies. My dad on the other hand advised me to be all sided; so I did great at my lessons and also spent so much time in training myself.

I love biking, I have always loved it. I remember how, ever since I was very young, I performed tricks and stunts of all kinds with any bicycle that I’d find.

In 2009 my teacher Samson Solomon (aka Dibbi), now a Commission of Sport’s official member, told us about races in which youngsters could join, so I joined. As always with the support of my dad, whom fixed an old bicycle we used for home errands and later I used for my early tournaments.

After that I just knew I was going to race with all of my heart. The only problem were my brothers; I had to hide from them. You know how for trainings, bigger teams would line up first on the start line, and the women team on the back? So I would normally wait until when my brothers attend for the start at the front. I used to hide behind some bushes and later on join the girl’s peloton. However every time the boy’s peloton overlapped us, they would see me even if I’d burry my face in between my arms as much as I could!

Ah… good times, it brings me back happy memories! Of course, in the long term, I proved them wrong and now they are my mentors: they tip me with so many advices and techniques.

-The challenges and obstacles before trophies and medals.

At first I had little luck. Like one time there was a race in Singapore. I had passed all the local qualification games but I couldn’t join because I was very young. I made the cut for the national team several times but then also I slashed off, again, because of my age. In fact it took me quite some time to join the national team. Another time, I was confident in bringing back home some medals from the Tour de Free State in South Africa, but I got into a car accident only three days before the race. Many other times the teams that I would join end up segregating and just more ‘unlucky’ instances, which made my journey much longer and harder. Nevertheless, I am glad I did not give up, but just kept on believing on myself. Now every victory I come across tastes even sweeter.

-You argue that a little is being done on women sports?

I do. It is unfortunate, but that is how it is, not only in Eritrea so is in many other countries. Women sports are not followed as much as men sports. But I can only speak of what I know of my situation, especially in cycling. Women cycling took so much time to reach to the little that we have now.

I strongly believe that Eritrean female riders have massive capacity, I have seen it with my own eyes. Every time we go for international races we notice how cyclists of other countries find us as strongest opponents; our will is a challenge that they have to face. And even so, we have almost nothing compared to the facilities they are provided with. They are provided with trainings around the world, they are constantly in good condition because they are always under serious surveillance. And that is how it is supposed to be. As per to our case; we’re not encouraged to do the best we could do had we been equipped with necessary tools.

I have noticed how in international games, other teams go in the tournament places beforehand and train to simply adjust to the climate and geographical composition, where as our team reaches the racing place only hours before. Truthfully there are so many things that could go better.

We need encouragement. Like for example in the latest Tour of Eritrea, we were not let ride behind, it could have been extremely useful exposure for us. On the contrary, an Egyptian female rider was allowed, since she is to join the Olympics in Rio! We were astonished. Why can’t we go there when we are much better?

I am hundred percent and surer that we could go far beyond African Championships and All African Games. I am so convinced that we can take by storm over continental teams and games, and even the Olympics! … Do you know why many female riders quit?

Mainly because majority of us are from towns and villages and we are required, at a certain age, to answer the call of marriages. At home, for almost every young sports woman, there is a conflict every day. Parents traditionally want a happy family for their daughters and since they don’t see tangible and fast progress in us while doing sports, they naturally tend to worry of their daughters’ future. So they say: “Hey. You dropped school for sports and you’re achieving almost nothing, so let us get Mr. Right to support you.”

And that’s it. End quote. Many talented girls end up dropping sports and start a family at certain points they see no near good future.

To my fellow sports women, I’d like to remind them that they need to be multi-faceted: go to school, learn skills and do whatever to support themselves and dreams. I want them to stand up for their goals, and to always be hopeful and confident.

And one more thing that I’d like to direct to the fans of sport and people involved in sport vocations: Your kind attention please, we young sports women too, can make massive history on international games. So, can you please assist us?!?!