Sub-zones awarded for their contribution 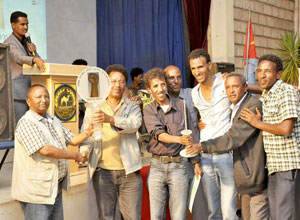 In the Southern region, sub-zones and individuals who made due contribution in colorfully celebrating the Silver Jubilee Independence Day anniversary have been awarded.

Mendefera, 16 June 2016- In the Southern region, sub-zones and individuals who made due contribution in colorfully celebrating the Silver Jubilee Independence Day anniversary have been awarded.

In an assessment event held on 14 June 2016 in Mendefera, the administration of the Southern region handed over awards and trophies to all who made outstanding contribution in organizing the different activities such as the welcoming of the Independence Torch tour, talent show, inventions and renovation as well as carnival shows.

Mr. Abrham Yohanness, Chair person of the regional Holidays Coordination Committee, said that the contributions of the governmental and private institutions as well as individuals were highly significant and thus all the events were colorfully conducted as planned.

Mr. Efrem Ghebrekristos, Governor of the Southern Region, on his part commended all parties who made contributions in all celebratory programs.

Segeneyti sub-zone, was ranked 1st in the assessment made as regards the carnival shows and the overall welcoming event of the Independence Torch.

Certificates and monetary wards were handed over to private institutions for staging colorful carnival shows and individuals for their outstanding performance in the different competitions.