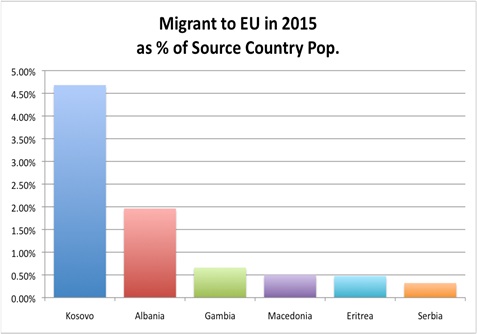 On 08 June 2016 the Commission of Inquiry on Human Rights in Eritrea (COIE) declared that it “has reasonable grounds to believe that crimes against humanity have been committed in Eritrea since 1991,” and recommended that the matter be sent to the United Nations Security Council for referral to the International Criminal Court (ICC). While many of the COIE’s conclusions (as well as its procedures) have been broadly discredited and widely challenged, one that has received less critical attention has been its conclusion about Eritrean emigration.

Summarily dismissing any and all alternative interpretations of the objective realities on the ground, the COIE concludes that the primary reason for Eritrean emigration cannot possibly be economic, instead attributing Eritrean emigration, like other often sensationalized, simplified, cursory analyses, to National Service and systematic, pervasive human right abuses. In its conclusion the CIOE states:

“[T]he fact that there is no similar exodus from other
economically deprived states that are not in a state
of armed conflict, the Commission concludes that
economic reasons alone cannot be the driving force
behind the large scale flight from the country.”

To buttress its shaky conclusion, the COIE trumpets, among other debatable facts and figures, alleged data on Eritrean refugees and asylum seekers, including contending that, “the global total number of refugees and asylum seekers from Eritrea stood at 444,091, about 12 percent of the population of the country.” However, although the COIE states that it relied on UNHCR data, the UNHCR’s data on Eritrean refugees and asylum seekers reveals that refugees and asylum seekers constitute only 8.68% of the population. This great discrepancy raises alarming questions and is highly reflective of the considerable methodological and analytical shortcomings of the COIE. Furthermore, the UNHCR’s data itself has repeatedly been shown to be highly inflated (see Phantom Refugees [2015]). Problematically, these statistical discrepancies are generally characteristic of most other analyses and publications about Eritrean emigration. For instance, The Guardian, which has taken an increasingly anti-Eritrea stance, has regularly claimed that about 3% of the Eritrean population has fled. Ultimately, the CIOE’s shaky assertions and conclusions, often based upon other inaccurate, poor data, can hardly be called the product of methodical, reliable, carefully-designed analysis and interpretation.

The discrepant emigration figures notwithstanding, the great responsibility borne by the COIE should not be glossed over. It should uphold high standards and it has a much more solemn task than journalists, who in most cases are paid publicists for “human rights” organizations. The implications and consequences of the COIE’s interpretations, analyses, and conduct hold the potential to detrimentally impact the lives of 6.5 million Eritreans, if not tens of millions more across the Horn of Africa as a whole, for generations to come.  For the COIE to resort to outrageous, rather vapid conclusions without satisfactorily checking data or disregarding that those conclusions could be easily refuted not only mirrors the conduct of some obtuse propagandist, but underscores the three-person panel’s profound lack of competence and their absolute contempt and utter disregard for simple, basic facts.

To return to the COIE’s conclusion about Eritrean emigration, two basic, yet important, questions can be raised:

1)    Is it true that “there is no similar exodus from other economically
deprived states that are not in a state of armed conflict”?

2)    Can “economic reasons” not be a contributing factor to large-scale
emigration (i.e. allegedly upon the scale of 3-12% of the population)?

First, consider the case of Mali, which for years before the rebellion in the north of the country, has experienced considerable emigration. According to Mali’s Ministry of Foreign Affairs, “Four million, or over a third of the country’s 11.7 million people, [were] located in other countries.”

To be precise, long before any conflict took place, 34.2% of Malians had emigrated. Conflict or no conflict, that general trend has not abated. In its February 2016 edition, the magazine Monocle, in an article titled “Perpetual Motion”, underscores the very same point. Malian emigration is not attributed to “human rights conditions” in the country, but instead understood as arising due to “economic factors” and a “culture” of migration.

Beyond Mali, EUROSTAT data for 2015, from which the COIE claims it obtained data about Eritrean asylum seekers in Europe, are also illuminating in considering whether there could be a “similar exodus from other economically deprived states that are not in a state of armed conflict.”

Perusing the dataset reveals a list of countries with characteristics that strongly challenges the COIE’s conclusion. For example, Kosovo, Albania, Macedonia, and Gambia – none of which was in a state of armed conflict – each had a higher rate of emigration, relative to their overall population, than Eritrea, while Serbia (which is not in a state of armed conflict) had a slightly lower rate. Table 1 presents data on the population and percent of population migrating to EU in 2015 for each country. According to EUROSTAT data for 2015, the number of first-time asylum seekers for the respective countries was as follows: Kosovo (87,565), Albania (56,795), Serbia (22,750), Gambia (12,205) and Macedonia (10,545) and Eritrea (31,055).

Importantly, had the fact that approximately 40% of migrants claiming to be Eritreans are actually not in fact Eritreans – EUROSTAT data here are taken at face value – emigration rates for Eritrea would be far, far less.

Table 1 suggests that not only is the COIE’s utilization of the term “exodus” to describe Eritrean emigration inaccurate, particularly when considering other countries, its conclusion and assertion that “there is no similar exodus from other economically deprived states that are not in a state of armed conflict” is patently false. Furthermore, the suggestion “that economic reasons alone cannot be the driving force behind the large scale flight” is not in any way supportable by facts on the ground. Each country presented in Table 1 is not in a state of armed conflict, except for Eritrea, which is enmeshed in a costly, draining no-war no-peace conflict situation.

If any legitimate, reasonable conclusion can be drawn from the data it begins with the understanding that these countries suffered from conflict in the 1990’s, resulting in mass migration. Subsequently, current emigration trends are largely the result of “pull factors” related to an existing large Diaspora, established networks and linkages, and current economic privations. Any other conjecture is solely just that and unsupported by the data.

Additionally, the assumption that if between 3-12% of a country’s population has emigrated then “economic reasons alone cannot be the driving force behind the large scale flight,” is completely false. When utilizing the UNHCR data the COIE claims it used to conclude that “about 12 percent of the population of the country” live outside of Eritrea, one finds that the data, in fact, reveal that only 8.68% percent of the population live outside the country.

Again the discrepancy notwithstanding, ranking all of the world’s 232 countries and jurisdictions according to the “percentage of the population” living outside of the country shows that Eritrea ranks in the middle of the pack (see Table 2 below). While Eritrea’s figure is less than 10%, the global average for all countries and jurisdictions is that 11.36% of the population lives outside their country. Simply, there is nothing remarkable about Eritrean’s emigration when compared to the global average and statements or questions such as Eritrea is “not at war, but up to 3% of its people have fled. What is going on in Eritrea?” or “economic reasons alone cannot be the driving force behind the large scale flight from the country,” are void and easily dismissible. They are vapid questions or statements raised by agents unaware of global realties or disinformation presented for propaganda purposes.

Rather, the fundamental point is that the COIE’s assertions, claiming that Eritrean emigration is the direct result of human rights abuses or that the length of National Service alone could produce those levels of emigration, are a result of utter ignorance or politically motivated malice and they cannot be corroborated by objective analysis or examination of credible data.

The sophomoric attempt by Eritrea’s detractors and some propaganda machines is to infer nonexistent causation by simple correlation. Although it may confuse the uninitiated, it is too puerile to merit additional exposition. Here, rather than alleged human right abuses, emigration rates are more strongly correlated with and are better explained by economic factors and the size of existing Diaspora communities and their various connections or linkages with countries of origin. Importantly, these findings are strongly supported by the established academic literature and numerous rigorous studies.

Just a cursory look at jurisdictions such as Saudi Arabia that lack even rudimentary human rights or democratic institutions reveals that only 0.78% of their population lives outside the country (which is one of the lowest rates in the world). On the other hand, bona fide democracies at the heart of Europe experiencing economic hardships, such as Portugal (18.4%), Ireland (15.83%) and Greece (7.3%), produce large immigrant populations. Essentially, migration’s multidimensional nature and array of pull and push factors mean that one cannot casually draw simple conclusions as the COIE did. The COIE is indicative of how, as Dr. Fikrejesus Amahazion rather aptly puts it,

“Rather than recognize great complexities, the vast
majority of analyses of Eritrea are often littered
with simplistic sound bites that shoe-horn the country
into highly generalized, ineffective black and white contexts.
This reductionist approach attempts to characterize and
explain an extremely intricate, complex phenomenon
in terms of singular, narrow concepts.”

Although extremely troubling when from purported scholars or journalists, it is absolutely inexcusable and criminally appalling for an international commission tasked with deciding the fate of millions and with the financial and institutional backing of the UN and UNHRC to produce such poor, mistake-ridden, work. To fail to recognize or satisfactorily address the numerous facts and contradictions significantly questions the competence of the three-person COIE panel to make the recommendations they made and thoroughly discredits their conclusions. Moreover, it not only reflects poorly on the UN and the UNHRC, it makes a tragic mockery of important and globally cherished values and principles such as human rights and justice.